I purchased the deluxe edition of this album which is 70 tracks (vs. the 54 track version from Qobuz/Tidal/etc), and Roon cannot seem to recognize the track name data after multiple attempts. I have tried all the steps I can find or think of, even checking boxes to prefer file data doesn’t import the track names.

iTunes has no problem getting the tracks labeled, and I know Roon sees the names but I cannot find a way to get them labeled, they just say Track 1, etc. Any help? 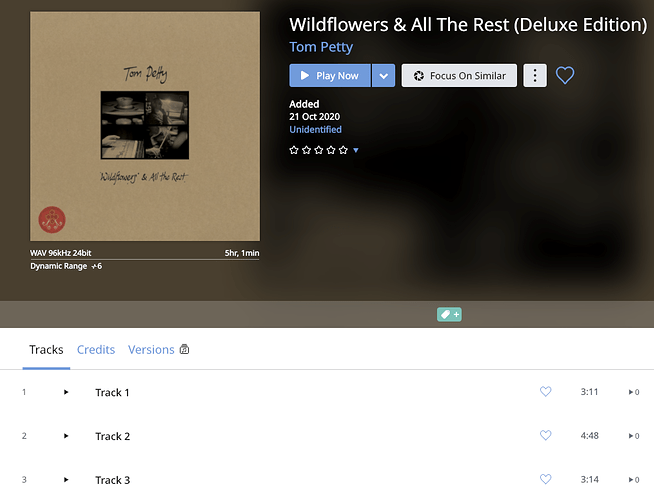 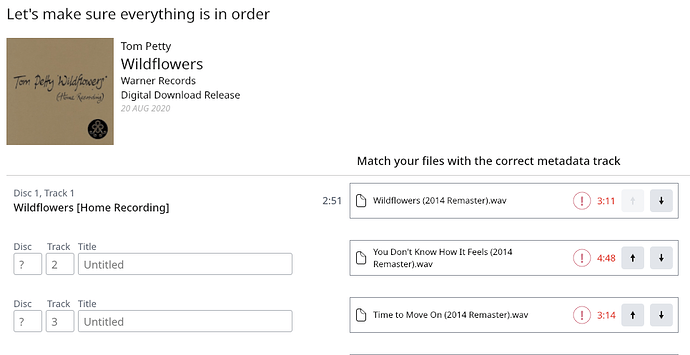 That album is both “wav” and “unidentified”, so roon has no idea what it is.

First try manually identifying it by clicking on the “unidentified” link in your first screen shot. If you cannot get a manual match then roon hasn’t got enough to go on and you are going to have to manually tag the “wav” files with enough information so that roon can make an identification. It is not uncommon for wav downloads, unlike flac, to have few or no tags. The “labels” you see in your screen shot are the file names, not the file tags. It is usually a lot easier to tag albums with an external 3rd party tagger rather than roon. It is usually not necessary to exhaustively tag everything, just the basics like the album name, track titles, artist and release year. Sometimes tagging the record label and catalogue number does wonders. Mp3tag is often recommended for windows and Yate for IOS. You can also try autotaggers like SongKong when you are struggling to get a roon album identification.

That’s not the problem @tripleCrotchet. And we can identify WAV albums. In this case, we simply don’t have any metadata for a 70-track release… from anyone.

And we can identify WAV albums

That is also my experience, but far from every case. In practical terms, the OP may want to try manually identifying against the 54 track release that roon does have. I sometimes do a “good enough” match like this myself in order to avoid manually tagging. But it is hit and miss. For example, if there have been a lot of releases in different formats in different territories, then the track order and even the bonus tracks can be very different from release to release so that approach may not work.

I don’t have this 70 track release so I cannot check. But if matching against the 54 track release doesn’t work and it is important to the OP then manually tagging is the only option and that may even require converting to flac.

Thanks for the suggestions. For two days previous to my post, I had already tried identifying the album as the 54 track version from Qobuz, and Roon wouldn’t do it.

As of this morning, Roon came up with the 54 track version as an option, and it added those track names when I hit OK during identification, so hallelujah!

Perhaps the full 70 track version can also be added to the Roon database soon-- it’s available from both the Tom Petty and Warner Music websites as a 5-CD or 9-LP set with instant hi-rez downloads, so I’m sure other Roon users will buy it and find the same problem.

To sum up: I can add the other 14 track names manually, I just don’t understand why I have to do that since the names are clearly contained in their metadata. Is there not a checkbox or other function to tell Roon to adopt the track names from the files themselves?