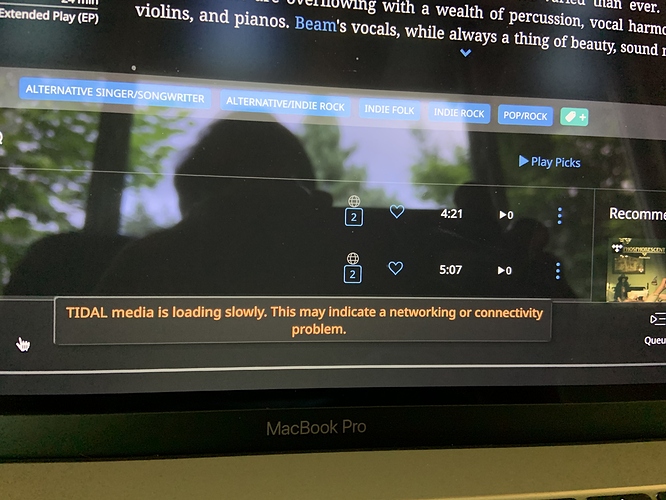 2 posts were split to a new topic: Problem with Bluesound and Roon

Just to confirm, playing to the Chord never exhibits this issue, correct? Does the same behavior occur if you connect the Bluesound via Ethernet?

Yes, the Roon Nucleus->Chord works fine. I will try a BlueSound device via ethernet tomorrow morning

I grouped the BlueSound Node 2i connected to the network via ethernet to the Nucleus a half dozen times and it worked each time.

Since this issue does not occur when using Ethernet, we would suggest to keep using Ethernet-based communication with your Node 2i. It is possible that you have WiFi channel congestion, this can happen when there are too many routers/access points trying to use the same wireless channels for communication.

Using ethernet is not an option. As you can see from my original post, I have 4 Bluesound devices and none are located in a place where I can use ethernet. I have used Roon+Bluesound for several years, and I have had this exact same setup since November 2018, and nothing like this has ever occurred until the last update.

I’ll also add that right now, I have the house to myself - no wife or daughters at the moment. I looked at the “Traffic Control” on the Synology Router, and the only devices connect to the wireless network are my MacBook, iPhone, iPad, a security camera, and my 4 BlueSound devices, so I don’t think network congestion is the issue.

I’m seeing other posts on this forum that indicate that this problem has been replicated by your experts and that you are working on a solution. I’m a looking forward to seeing this fixed in the very near future.

Could you link posts that you reference so that others might refer to them.

My thread was split a few days ago. I think this is the link.

Problem with Bluesound and Roon

@support I have exactly the same issues. It seems playback from Roon with Bluesound WiFi devices is very problematic. I did the following test:I have tried to stream music from TIDAL directly with the BlueOS app and compared with the same song I picked of the same album that I have also ripped in Roon: I played a specific song from TIDAL in BlueOS and streaming was OK (I am streaming in Hi Res from Tidal) I tried to play the same song from my library in Roon and it simply wouldn’t play. I had…

Mine was one of them.

Is there an update from the Roon Team on the status of resolving this problem?

No update to share at this time, we are still working with Bluesound on this issue, hopefully we will have more details to share soon.