Which NAS devices are supported.

Most QNAP, Synology, and Asustor devices with a 64-bit Intel CPU and at least 2GB RAM are supported.

but then goes on saying:

How does that rhyme with the first statement? I do not understand. Please clarify.

Important addition: the TS-473 costs about 690 euro, while the somewhat comparable and least expensive model and with an Intel processor: the TVS-472 2XT cost nearly 60% more : 1090 euro.

Thank you for your help and best regards,
Luke

Had an old Synology NAS before and had the same thoughts, Ending up with the Nuc8i7 with a smal M2 SSD and an 2TB internal SSD Works perfect😁

Do you have other reasons for needing a NAS?

If you’re contemplating a NAS just to run Roon, that’s not the way to go.

To my mind, the only reason to have a NAS is if you want to access files from more than one machine.

That isn’t a consideration for Roon…

Thank you for your quick reply.

Is the “kb.roonlabs.com/Roon_Server_on_NAS” knowledgebase article is simply wrong when it specifically requires an intel processor? Shouldn’t this passage be rephrased? Can you explicitly confirm that the TS-473 with the supplied AMD processor will work for Roon ?

I currently using an 8 yr old Synology NAS, which is getting too slow and too full. That is why replacing it and adding Roon sounds like good option to me.

What cpu/memory to use for a Roon Core, is dependent on a number of factors, of which, some of the main ones I’ve listed under question 1.

To answer your main question, AMD and Intel are part of the same x86 processor family so that is why either will work. Not sure how many AMD run NAS models were available when the original part of that FAQ was written. I would guess Intel was specified so that a user didn’t purchase a NAS run by an ARM processor which are common. To a technical user, specifying Intel implies any X86 processor, kind of like saying Kleenex instead of tissue paper. But, it should probably be revised to read “…64-bit x86 CPU, like Intel or AMD,…”

No. I don’t own any Qnap products, never mind that model. But perhaps @crieke can give you the assurance you seek. To me it is relatively simple in that there is no reason it shouldn’t run, but you will be the one spending the money.

Is the “kb.roonlabs.com/Roon_Server_on_NAS ” knowledgebase article is simply wrong when it specifically requires an intel processor? Shouldn’t this passage be rephrased?

Hi Luc,
That KB article has now been updated to aid clarity.

There is a recommended minimum CPU type and what you can get away with if you know your demands will be very light (no DSP etc).

I used to run the core on a QNAP TS-251+ 8GB memory which is Celeron based and thus below spec, but it is still an x86 CPU. Initial library analysis was of course very slow (due to everything being on slow mechanical WD Red NAS drives), there was insufficient CPU to do much in he way of up-samping or any other DSP and certainly not for multiple hi sample rate endpoint. However browsing was perfectly OK, probably because it has a decent amount of memory in it.

Sorry for mistaking you for a Roon official, rather than a very helpfull citizen.

Well, The KB article has been revised, now allowing both AMD and Intel x64 processors. Thanks for your support in this matter.

The library consists of no more than 500 albums or 4000 ‘songs’. I will not be doing any upsampling. The laptop, on which the test version of the Roon Core is temporarily running blazingly fast, cannot be beaten by any NAS, since it (the laptop) has an i7 processor, 16GB of RAM and an SSD.

Having used a NAS for the past 8 years (and for a number of different tasks in addition to storing music), I feel more confident of replacing it by a new NAS, rather than by an intel NUC. I tend to follow @crieke in his reasoning in this matter.

The recommended QNAP TS-473 (with an SSD in addition to a number of spinning HD’s for storage) in the KB article is not stated an a minimum requirement, on the contrary, the article explains “why this works so well” . To be on the safe side and more future proof, I will probably go for one of the faster QNAP TVS models

Perhaps @crieke is willing to share what QNAP model (if any) he is running Roon on. That would indeed be quite helpful …

There is also QNAP’s official QNAP and Roon website, which currently lists: 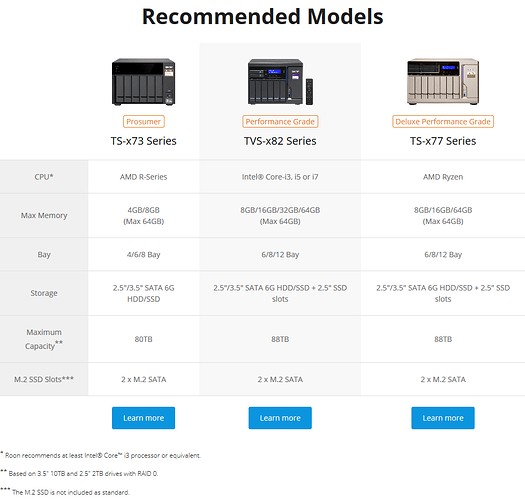 I have a test setup running on a netgear readynas using a e8700 core2duo.

Enough of the ‘sword fencing’ boys!

@Luc_Daneels, much of the support here is provided by fellow users. It leaves the support guys to deal with the big stuff and stuff I wouldn’t have a clue about!

Maybe this two articles can help you, I have good experiences
with the Synology DS1815+ (older model)
http://www.modelpromo.nl/ROON%20Server%20on%20Synology.htm

the advantage with intstalling ROON on a NAS, is that you will get a very nice
compact and reliable streaming solution.

I think the newer DS1819+ will be a very good investment

You only have to add only little ROON end-point/DAC solution like this one
to listen to music:

The roon developers have to deal with two architectures: x86 and arm. Core doesn’t run on an arm. So the page probably says “intel” when it means x86, because the writer was thinking “intel vs arm” rather than “intel vs amd”. I’m running core fine on an AMD 3400G.

So the page probably says “intel” when it means x86, because the writer was thinking “intel vs arm” rather than “intel vs amd”.

That page has since been updated to improve clarity. Have a read if there’s still something amiss let us know and we’ll review / update it.