In our demo, we were showning the microJukebox ripping CDs and then playing them on our microOrbiter, running RoonSpeakers (ALPHA). This was all controlled by an iPad.

Visitors, to our room, were very impressed with the Roon interface and also with the simplicity and size of the setup. The best part of the demo was when I put a CD in the microJukebox and the tracks started to appear, one at a time, in the Roon app on the iPad. We could play the first track before the rest of the CD was even ripped.

For people familiar with other music systems, such as Sonos, you need to “re-index” you collection when you add more music to your music folder. This extra step adds complexity and slows down the user’s ability to listen to new music quickly. This is not the case with Roon.

We had a great couple of days listening to all kinds of great music on the DAC and amp provided be Sonore and theRaidho Acoustics C1.1 loudspeakers.

Small Green Computer has a simple goal, to give you access to all of your musical content from one simple, easy to use, location. We love audio, just like you. 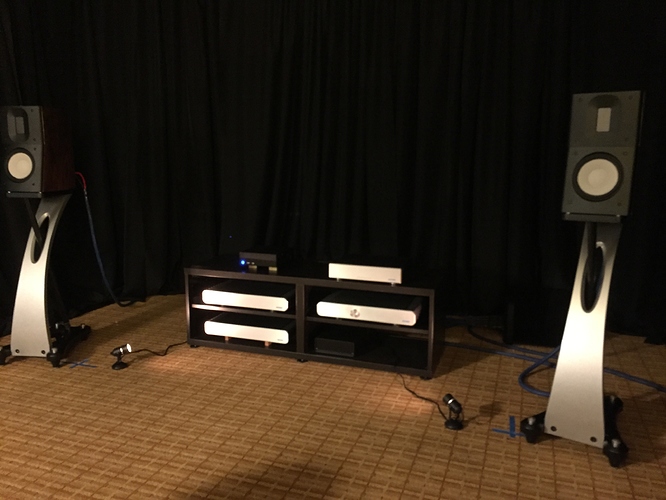 A number of people (including me) are looking forward to RoonServer on Linux so this is very welcome news.

Are you able to give us some details about the computer inside the microJukebox ? What size was your library ?

Great to see Roon Server for Linux and RoonSpeakers in the wild. Tells me it probably won’t be too long before my LMS ecosystem is replaced with Roon running on the Arch based server housing my 10TB library, with RoonSpeakers running on Arch for ARM feeding my DAC via USB,

Thanks for posting this! I’m glad to hear that the demos went well.

We’re working hard over here to get both the headless Linux stuff and RoonSpeakers into a releasable state.
It will be an exciting couple of months ahead.

The microJukebox using an ATOM processor. It has a 1TB hard drive so it could hold about 25,000 FLAC files. I have tested it with 4000 files and it has no problems. I’m going to test it with more when the next BETA of Roon Server comes out.