So I have my music library on the internal 1TB SSD inside my new Nucleus. The library is also my iTunes library, so that when I burn a CD on My Mac it gets added to the Nucleus, and can also be accesses by Roon software on my Mac, iPhone and iPad. All works great.

The Nucleus is networked to my Router. I now want to back up the Roon Core software and the music on the Internal Nucleus storage using an external USB 3 drive. How do I initiate a back up?

Suggestions of software for backing up your music files are to be found in this thread:

So far I am backing up my music files per drag and drop from the main HDD to the backup-drives. Is there any software you would recommend for this task? I can run it on Windows, Mac and Raspberry. Or do you have any links which might be of interest regarding this topic?

You would run it on your Mac and target the Nucleus SSD and external USB drive.

I assume that you have already set up scheduled backups for your Roon database. For the Roon Core software, I personally wouldn’t bother backing it up. It’s easy to reinstall if ever needed.

In my set up the Nucleus is attached to my router via an ethernet cable. My Mac is connected to the router by Wifi. I have tried connecting a back up disk to the USB port of the nucleus but I cannot see it. I am thinking it might need to be a reformatted i.e. not Mac.

Alternatively I suppose I could plug it into the back of my router. The Nucleus has a SSD with my library on it.

From the ROCK Storage basics KB page (also applies to the Nucleus):

If you’re going to directly connect a USB drive to your Core, you will have some options about how you want to format your drive.
We recommend USB drives connected to ROCK be formatted exFAT if you requires compatibility, or EXT4 if you don’t.
Advantages of using exFAT include:

ROCK will also work with NTFS ,FAT32, and EXT2/3/4 drives, but if you are starting fresh with USB storage, our recommendation would be to use exFAT.

I’d be surprised if the Mac Finder can’t see the external drive connected via USB to your Nucleus, once it has been formatted correctly…

Thanks Geoff, I’ll report back.

So I plugged in a USB external drive into the back of the Nucleus and was able to back up the Roon Core.

I can view that disk through the Roon app on my Mac, and I can see the Nucleus in my Mac’s Finder and navigate to the internal storage files but I cannot view the external USB drive connected to it.

I’m somewhat surprised that you can see the Internal storage on your Nucleus using the Mac Finder, but not the external USB plugged into your Nucleus.

I’m not a Mac user, so help will need to come from someone else, but I would just note that I can see both the internal and external (USB) storage devices on my ROCK NUC in Windows File Explorer: 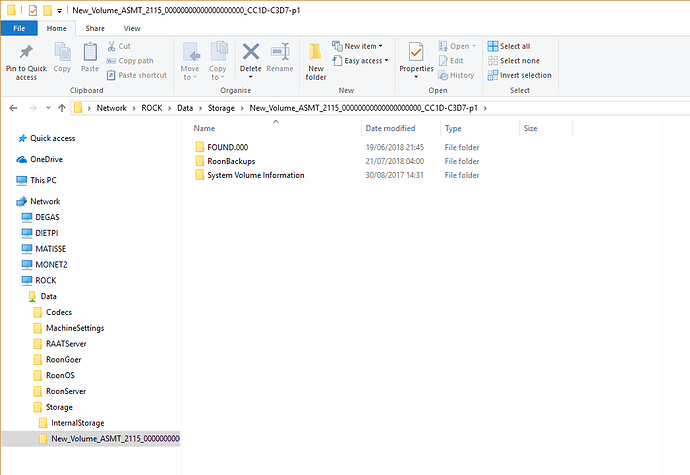 OK thanks Geoff. Any Mac users out there that can help?

A general point, not Mac specific, applies to Windows as well:

This works, but you might as well connect the USB drive t9 the Mac, will likely speed things up.

It’s a bit of a kludge as I am sure it will take for ever to back up my whole library over Wifi whereas the Roon Core backed up to the USB drive attached to the Nucleus took less than two minutes.

Anyone else have a better solution?

Depends on the WiFi connection you have.
Because wiring in my house is difficult, I decided to make WiFi my backbone and invested in a gigabit capable WiFi (Eero). Works like a charm.

I suggest you test it.

So I have managed this now. I have no idea how to restore from a backup. Is this covered anywhere?

I just ran into this exact same problem, and have found a solution in case anyone is still experiencing trouble with this.

Background on my situation:

To back up the iTunes music library now on the Nucleus (or whatever form of music files you have stored on a Nucleus internal SSD), I wanted to be able to now copy the files back over the network from the Nucleus to an external backup drive connected to my Mac laptop. And, importantly, after doing this the first time, I wanted to be able to do subsequent backups this way but only incrementally – only copying new changes, not the whole library every time. For this, manually moving certain files is technically possible, but not at all feasible or desirable.

The three candidates for a backup utility that would could do this, that I’m familiar with for the Mac, were SuperDuper!, ChronoSync, and Carbon Copy Cloner. Maybe I am missing some things here, but based on my brief research and testing: The problem with SuperDuper! is that over a network, it seems to only work the other direction – copying to a network volume, instead of copying from a network volume – and only to a Mac disk image that you create on the network volume. ChronoSync seems to be able to copy from a network volume, but the problem here is that it seems to require the network volume to be formatted for Mac and to have a ChronoSync agent installed on the remote computer; neither of these is easily doable or even possible with the Nucleus, that I can tell.

Carbon Copy Cloner, however, worked just fine without any tweaking. With the Nucleus mounted on the Mac laptop via SMB, Carbon Copy Cloner easily allowed me to select the Storage/InternalStorage/iTunes folder on the remote Nucleus SSD volume as the source for backing up, and then allowed me to choose the destination as a folder on an external drive attached to the Mac laptop. I’ve successfully completed the first full backup this way over the network, and now future backups run with the same Carbon Copy Cloner task will simply be quick incremental backups.

That is really useful. Day to day I use SuperDuper and I know that is not possible because David Nanian the developer who owns a Nucleus told me so! So just as you describe I have been doing whole library backups.

It looks like the Carbon Copy Cloner solution is the one!

BTW I use a 64GB flash drive inserted into one of the USB ports on the back of the Nucleus to back up the internal Roon SSD.

Many thanks for your help

If you feel comfortable with shell commands, there’s always rsync, or even better https://www.cis.upenn.edu/~bcpierce/unison/.

I bought CarbonCopyCloner and it worked first time and the subsequent incremental backup worked too so I am now happy that I have a solution.

Great to hear. And thanks for sharing the USB flash drive option for backing up the Roon database, sounds like definitely the most convenient option.

Because I’m paranoid, and I like to automatically have multiple backup copies of everything, I went the more complicated route of setting up a shared folder on my Mac laptop that Roon could access, and then telling Roon to put the regularly scheduled Roon database backups there. That way, those backups can also automatically get scooped up and duplicated as part of my standard backup routines of my Mac laptop hard drive. So that’s another option, which creates more redundancy.

However, it was a bit of a pain to figure out and set up, even after reading the instructions here. Eventually I realized that I had to follow every step of those instructions exactly, but I also had to first create a new user account in my Mac laptop’s system preferences just for the Nucleus, which I called Roon, with its own unique password, before I could then assign that user access to the shared folder on the laptop in the File Sharing system preference—and only then could I successfully enter the “Add network share” login info correctly in Roon for the Nucleus to use. And then finally, I also had to go back to the shared folder on the laptop after the first backup and grant additional access privileges to my laptop’s admin account. The reason being that some of my backup software needed those privileges to be allowed to work with those folders and files created by Roon from the Nucleus, apparently. Phew.

So yeah, USB stick into the Nucleus is probably the smarter option! But this is what I did if anyone wants to try.

Yes the 64 GB flash drive works well. It stores 2 copies max so on the next write it copies over the oldest one. All easily done in the Roon settings for Backups.

I think Roon should post these solutions in their support material. Getting to this point has taken me nearly a year! …thanks mostly to enthusiasts in this forum.

I really like the Nucleus. It just sits there doing its stuff brilliantly. BTW do you turn yours off? I am not very consistent. I think Danny said in one post that we should just leave it on.

I use a N+ with 2TB SSD, a MacBook Pro with ChronoSync and a Qnap HS453DX-DX. I run a normal ChronoSync routine to backup the flac files and the roon db. Backup is probably the wrong word, the files are simply synchronised into one direction (N+ -> Qnap)

I use the SMB protocol which is for Mac user the better choice compared to the Apple AFS, especially if you are using a NAS.

The NAS data is mirrored to another NAS via the Qnap hybrid backup app. Yes I am a bit paranoid, but I have some experience loosing data.

So I can recommend ChronoSync is you are using a Mac and a NAS.

Only my two cents

This is helpful to know @Tom, thank you. I’d gotten stuck on the info I’d run across that ChronoSync would require ChronoAgent installed on the other computer (which wouldn’t work with a Nucleus), so I’d given up on that. Carbon Copy Cloner is now working fine for me for backing up the Nucleus SSD to my Mac, but ChronoSync is my primary tool for other backup tasks, so perhaps at some point I’ll try what you’re suggesting. I’m not sure, though, how to configure and establish a sharing connection between the Nucleus and ChronoSync on the Mac for this purpose. Don’t go out of your way to write up a long explanation, but if there are any instructions on the web you could easily point us to for future reference, perhaps I’ll try it down the road. Thanks.