Hi, I am noticing when I play a playlist, Roon will stop after a few songs. It is not happening when the file resolution changes (as in another thread), but it stops after playing 5 192/24 files and one DSD file. Also, when I press play again to restart, Roon skips that next DSD file and I must hit the previous track button to play it (the track will play this way and so it is not corrupt). I control Roon on my ipad and my output is HQPlayer.

Lastly, this same playlist plays fine when I stream to Sonos.

Adding @support to support queries ensures someone from support actually sees them. (Or at least makes it more likely!)

As a follow-up, what actually happens is the first song in a new format (DSD in my case) finishes playing and then stops. However, the Roon iOS app still shows it as playing via the music bars that move up and down. But no music plays. When I try to restart playing by selecting the next song, Roon plays, but skips to the next song and I must select the previous track button. Thank you!

@hammer Which version of HQPlayer? If it’s the latest, 3.16, I believe there is an issue with sample rate changes which should be sorted in 3.16.1. It doesn’t seem to affect HQPlayer / Roon users universally, but it does me. See Miska’s comment here. Temp solution was to roll back a version and wait for 3.16.1 to be released. Give it a try. If you’re not on 3.16, then this doesn’t help, sorry!

I think this is a Roon issue since I just noticed that if I turn off DSP Engine, then the playlist plays fine. I was using EQ in Roon.

When I try to restart the music by disconnecting from HQPlayer via the volume box, it appears the Roon iOS app loses connection to the Core and must reconnect again before music will play.

Hope someone @support is reading this!

Hey @hammer – we’re going to try and reproduce this. Can you give us a screenshot of your Signal Path, and let us know anything else we need to recreate your setup and configuration?

In particular, let us know Core platfrom, HQP version, DSP settings used in Roon, settings used in HQP, network and storage configuration, etc – the more we know about your setup the more likely it is we can get the same result you’re seeing and determine the issue.

The first picture has the music bars moving and music playing. The first 4 tracks are 192-24 files 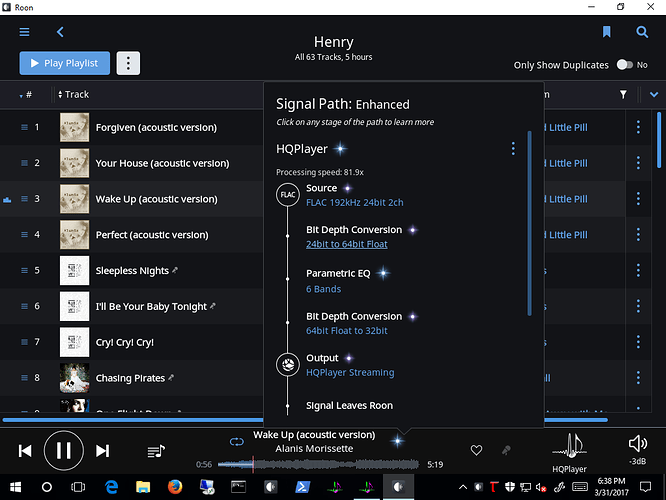 Core is running on Windows 10, all Roon components are up to date, HQPlayer 3.16

The second picture is taken after Roon gets to the 5th song which is the first DSD file on the playlist. the music bar keeps moving, but no music is playing. If I hit the next track button and then the previous track button, song 5 plays correctly, but the progress meter on the bottom advances very slowly, say 1 sec forward for every 5-7 seconds of music. When song 5 finishes playing, track 6 (also DSD) plays, but Roon does not advance to show that track 6 is playing. Once track 6 is finished playing, the music stops again. If I then hit next track, track 7 (also DSD) plays. After track 7 finishes, track 8 (also DSD) plays, but Roon does not advance to show track 8 playing. If I turn off DSP Engine, all the tracks play fine. Lastly, for the steps above, I can get Roon to play again after it stops without having to reset connection to HQPlayer or restarting HQPlayer. 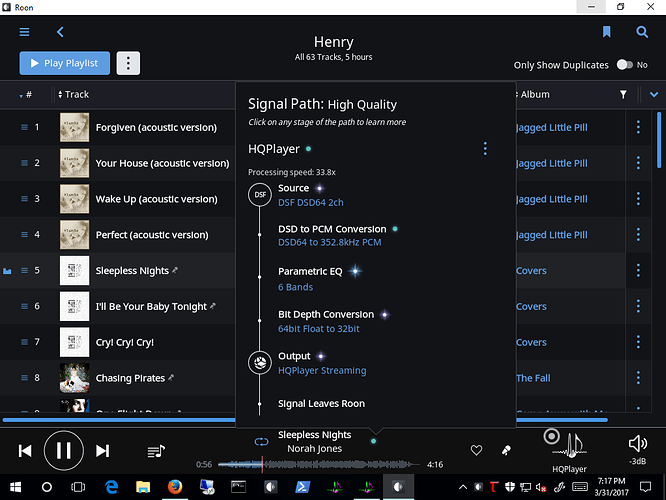 Please let me know if you need any other info.

Thanks – we’re going to try and reproduce, and we’ll let you know how it goes.

@mike, any luck reproducing? I’m testing out streaming to Sonos, and the same thing happens when I send the music to Sonos. Thanks!

Looks like this is fixed in the new release 216! Thank you!

This topic was automatically closed 2 days after the last reply. New replies are no longer allowed.