I disagree. Radio is the primary way I broaden my listening horizons and discover new artists and new material by artists I already know. Inevitably some tracks will be in my library since machine learning is based on what people are listening to for a given seed. I think that’s fine too since it connects the new with the familiar.

Restricting Radio to your own library is about (re)discovering music you’ve added to your library. This still picks music from TIDAL/ Qobuz and I for one add a lot of albums to my library based on Radio playback, forum recommendations etc. but may not get around to playing them for some time. My small library has almost 50,000 tracks and I need a little help finding those hidden gems every now and then.

I think resolution is irrelevent too; I’d rather listen to a poor recording of something special than missing out (Roon does select the highest quality for a given release.)

I agree. If I listen to my favorite Billy Stewart album, I like that Roon Radio then follows that with tracks from within my linked library (Tidal and Qobuz) as well as tracks not linked. I am usually in a certain mood depicted by the album I just listened to and, most important to me, is to continue that mood. I have discovered a lot of new material as well as artist I had not thought about in many years. Like most other aspects of Roon, it just works for me.

But wait, gentlefolk. I’m not just referring to Roon Radio. For instance, I have Cat Stevens flagged as a favourite and I also have a FLAC 192 kHz 24 bit version of Tea for the Tillerman in my own library.

If I start playing Cat Stevens as a selected artist (not Roon Radio nor the album), invariably Tea for the Tillerman will kick in pretty quick and every track played from Tea will be Tidal’s FLAC 44.1 kHz 16 bit version.

I’ve noticed this over and over again. I’m more of an artist/album Roon user than Roon Radio and almost always see Roon ignoring my library, with higher definition items to play tracks from Tidal.

This is in no means a major issue. Just curious - shouldn’t Roon prefer the higher definition item readily at hand?

Has there been any more discussion about this? I’m noticing it too. If I’m playing Billy Joel as the artist, I’d like it to source my 5.1 tracks from my library, not the same track on Tidal. This seems to happen more and more, it just never seems to pull from my library.

One work-around for this problem is to “shuffle” the artist as explained to me by Scott G.

Using “shuffle”, Roon will only source from the local library. I like this much better because I can more effectively curate my tracks. I have found that disliking a track in my local library will not stop it from being played from Tidal if I just “play” the artist. That can be frustrating.

Has there been any more discussion about this?

Hmmm. I haven’t used Radio in a while but right now Roon Radio picked Gimme Shelter - a Qobuz 24/88 version when I have a 24/176 that is the primary version in my local collection. Click on the now playing track, go to the Let it Bleed album, then Versions, and both are under there. Total track equivalence and yet Roon Radio did not play Primary Version. Still sounded good. But odd behavior. Update: I noticed this happening repeatedly with very common classic rock songs that I clearly ha…

Since I noticed it, I have been paying more attention to see what Roon does. To my observation, Roon does not EVER play a track from my local library when there’s a streaming version. This does seem recent.

It is certainly not a fatal issue. But does seem like a waste of bandwidth.

Actually, I have just noticed something. I don’t think the problem is with Roon Radio per se. And I am pretty sure I would have noticed this issue before if it had been around a long time, so it MUST be recent:

Go to an identified album in your library. Click Versions: 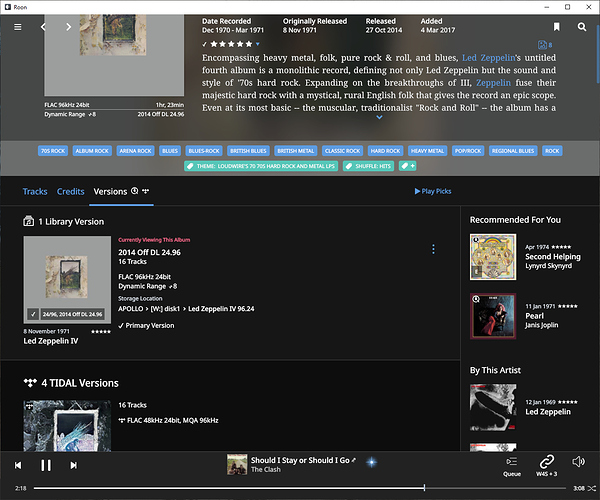 Click a Tidal or Qobuz version (not in library). From the screen for that album, click Versions: 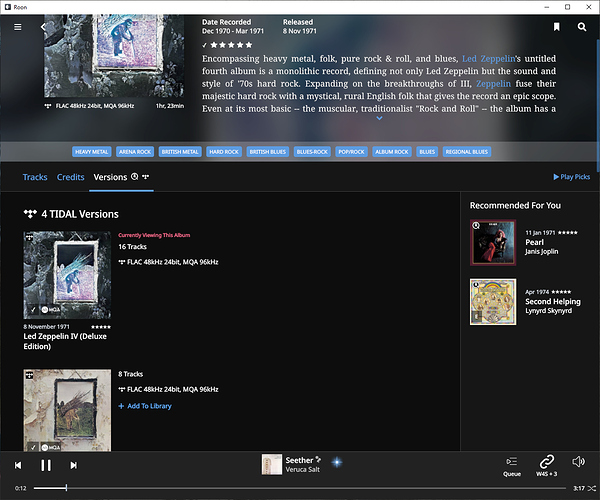 The library version isn’t there! Roon is not translating from Tidal/Qobuz back to library/local versions!

That’s odd, I tried the same thing and saw my library version both times, not sure why you don’t see yours… Thanks for sharing the updated discussion on it. It’s pretty frustrating as Roon never seems to pick my local version. I’ll need to check to see how it counts the number of plays I give each track. I assume it lumps them back together - it looks like it does. That means it knows it’s the same song, so why default to lower quality version?

Same here - once it starts auto adding to queue - it only ever adds Tidal versions. This happens with all music in the local library. Seems to be a more recent issue - maybe 3-4 months now. Will play a Tidal CD quality track when the same track is a 192 Flac locally.

Not a huge problem - but it is pretty annoying. And the explanation that Roon’s goal is to play the best music doesn’t add up - as it literally will only use tidal versions 100% of the time.

This annoys me too - so often I go to favourite a track but can’t as it’s not in my library - except it is!

Smacks of a deal with Tidal to max plays.

Also rather puzzled I just had to select Master on Tidal preferences - surely best available should be the default rather than lowest bandwidth? Hmmm!

I came across this thread looking for this exact topic. Radio only plays Tidal tracks even if I have a local one and it was bugging me… I would much prefer it to play my local music. So I searched the community and found this old thread.
Seeing as this thread is over 2 years old, I imagine this is just how it is? I’m not going to lose sleep over it, but just wondering if a tick box was added somewhere that I am missing? Would love an official confirmation…

Any news on this? I also would prefer Roon to always pick at least my version of the same quality or higher quality. I can then also easily like the track in the queue in stead of having to browse to my version.

Does it have something to do with commercial agreements and how Roon / Tidal / Artists are paid?

After this thread started, there were some changes to preferences, in Roon 1.8 build 987 in July. The current behavior and options are explained here:

Roon makes it easy to navigate across tens of millions of albums and tracks, even when multiple versions of the same album are available – the Versions tab lets you browse different formats and sources, across multiple streaming services and your ...

If I read that right

Thanks for pointing to that help page!

I am going to test if Roon prefers my own “same quality version” of a release over Tidal.

I have not noticed any change in Roon behavior on this topic, I haven’t performed any detailed analysis but, anecdotally - whenever I happen to check the source of any particular piece being played it is almost never my local storage. Actually, the only time Roon seems to play from my library is when the internet is down!

Thanks for the article. I don’t think I am explaining myself right, so I’ll state and example:

So, I was just wondering why it wouldn’t see that I have that song in my library and play that version - that is what I would want. That’s why it’s in my library.

Anyway, no biggie but that’s all I’m talking about here.

I understood that. I don’t use radio much, so I couldn’t say if it’s different for me. But this page is the best official summary I know regarding what it chooses automatically, and it does say this:

For tracks and albums in your library, these streaming preferences will not be considered – you’ll simply get the Primary Version from your library.

This reads as if it might be expected to prioritize those. Maybe I misunderstand what is trying to say

Interesting, b/c it’s clearly not doing that - I get nothing form my library…

I don’t use radio much either, I was actually giving it a go when I ran into this.

There are lots of complaints about radio for falling into a repeat loop of always the same things over time, at least for some people. But when I do use it, I usually find it spot-on as well, and the one time I tried it over ten hours or so, it kept up the quality. That was recently, maybe things are improving behind the scenes

I would prefer that if roon radio is going to play a track it should check to see if it is already in my library and play that version first. I would much rather “like” the version in my library than Qobuz.