Why does Roon Radio still repeat certain tracks all the time? I appreciate that it now plays music from Tidal and Qobuz that is not in my library but it is still regularly repeating tracks. It used to be John Zorn/Fred Frith “Foetid Ceremony” but now it is Borah Bergman, “When Autumn Comes.”

Not sure if I am being asked to repost here or not but Roon Radio continues to repeat tracks. I love that it now plays music not in my library but would really love to see the repetition problem solved. Thanks.

I have moved both of your posts to the Roon Radio Feedback thread and you can discuss the issue here. I’m not sure if anyone else is seeing this behavior but can you specify what are you using as the seed (track/artist starting off)? Is this reproducible every time?

Norris, I think the seed track constantly changes. I suppose the problem is reproducible in the sense that I, eventually, always find that there are songs that are repeating. Why it is so often these same peculiar tracks, I don’t know. Is my Roon just haunted?

Thanks for that, and it looks like it would do the job, but I don’t see a ROCK option. Or is there?

No, you can’t install Extensions on ROCK. You need to install them elsewhere. I’ve actually installed the Extension Manager on a RPi running DietPi, and used that to install the Alarm Clock extension.

I was not able to seed with multiple albums, genres, artists, or tracks, that would be a nice first step, however

I have no idea where to post this on your BBS, but I’ve been testing the new improved Roon Radio since the release of 1.6… today, it’s been on for the past seven hours.

Standing ovation! Absolutely excellent! The longer it plays, the better it gets. Perhaps this is due to more obscure music; beats me what the algorithm is doing, but I (we) love it. Please keep up the good work. Did I mention a standing ovation? Gotta run; more terrific music is playing and I have to find out who it is…

I know I probably going to get bashed about this, but I do not really like the way Roon Radio AI selects from Tidal. I have found that in may case it selects newer releases from similar artists. Personally, I like the history and following the lineage of bands, (ie Mose Allison’s influence on Pete Townsend and the Who). So I don’t necessarily want to listen to his latest/last albums. I had thought that using someone’s current library as a means to seed the AI would be interesting, but that was already suggested and rejected in previous post. It also appears that the Roon radio AI rarely returns to my library, going mainly from Tidal (Red Book, but that has been covered here already). A proposed improvement would be for the user to control the percentage of Tidal, Qobuz, and personal Library. This would allow the user to explore music new to them on their own terms. Using this info to train the AI would also make the AI Radio better for all.

I suspect the algorithm is being updated, along with the input data from all using it, to nudge the blob in different directions. I’m scared once the real neural network becomes self-aware, it won’t need us anymore.

Searches and artist photos have been quite hit and miss, mostly miss, this morning.

I seem to notice some learning behaviour in Radio.This weekend, after downvoting six tracks in a row, the algorithm apparently went off in a different - and pleasing - direction.

I had never really bothered with Roon Radio until 1.6 and generally I have found it excellent. The integration with Qobuz makes it even more desirable.

A post was merged into an existing topic: Roon 1.6 Feedback Thread

I’ve tried reading through this whole thread, but it’s long so sorry of this has been asked before. I really liked Roon Radio before it included all of Tidal, and although I will use this feature from time to time as well I want to know if there is an option to just use library songs in radio now?

I want to know if there is an option to just use library songs in radio now? 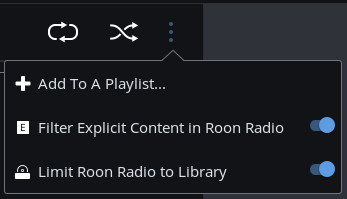 Seems like inconsistent UI design to me. I remember seeing the switch there and I toggled it off - I looked (almost) everywhere and the only way I could figure out how to find it again was to search for it in the forums (and came across this thread).

In hindsight I guess I should have clicked the three dots menu before searching online, but it wasn’t that obvious to me. I agree that this toggle should be in the main screen (or not at all even when it’s toggled on).

I think I saw above that when there are several Album Artists (or Primary Artists?) the Now Playing screen will show them all, not auto-cycling like on the CC Display but manually cyclable. Now I can’t find it.

In any case, I get only one artist and can’t find any rolling button.