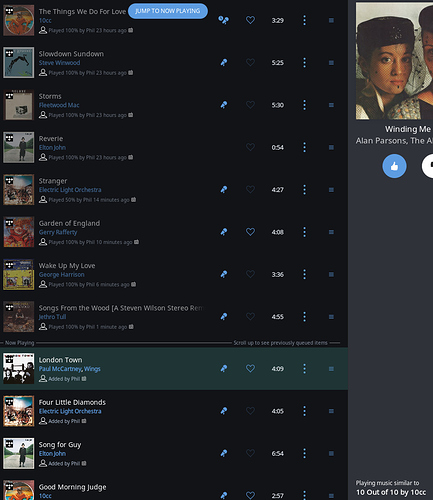 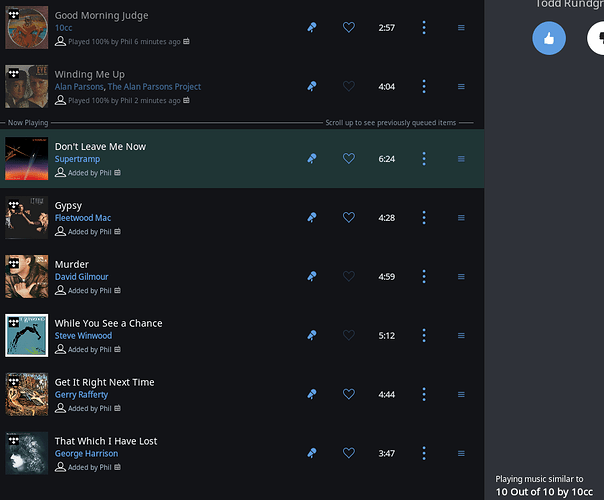 Nifty change in Radio: the possibility to up- or downvote a track while it’s playing and after the pop up has dissappeared. Also like the new colours of the thumbs up and down.

I have to give the Roon team credit. I was never a fan of Roon Radio and would typically get frustrated with its choices and turn it off, eventually turning it off and leaving it off. Since the 1.6 update I’ve left it on and on numerous occasions now while working, I’m 6+ songs into Roon Radio’s selections before I realize that it is Roon Radio and even then I’m still enjoying its choices.

Yes, that would be great! I have it currently turned off as it was giving me too much junk I didn’t want, and some artists suffer because of too many re-releases and deluxe editions so was giving me a lot of demo mixes and live songs I didn’t want. A slider would definitely make me turn it on again for the possibility to find new music.

is this choice persistent, or does one need to reselect “limit to library” each time radio starts?

is this choice persistent, or does one need to reselect “limit to library” each time radio starts?

It doesn’t appear to be persistent.

Ironic, Shuffle is annoyingly persistent, but a control one would actually want to be persistent, isn’t.

Roon wants to drive us to Tidal as the cloud-hosted new Radio only works if it has millions of tracks and the metadata that goes with it.

I agree, the toggle should remain visible so one can make the choice quickly and easily. I bet they figured they’d be eliminating support issues if it disappeared, and thus driving it back to Tidal, causing people to complain Radio is no good (because it was only using their local library).

Why are you so intent on ascribing motives to Roon ? It makes it hard to understand your feedback because your guesses about intent are so wrongheaded. Roon doesn’t care less whether you subscribe to Tidal or not. Roon is explicitly asking us for feedback about Radio, not duckshoving Support issues on to Tidal. Stop spruiking false conspiracy theories and just say clearly what you want to see changed and why.

I’ll bet Roon would certainly love to demonstrate that they can drive more Tidal subscriptions. That’s perfectly logical – continuing to have Tidal’s attention and support can only be a good thing for Roon’s ability to stay integrated and offer the value they do.

Plus the ability to drive subscriptions probably has a lot to do with Roon’s valuation as a company.

And they have driven more subscriptions. Whether it moves the needle for Tidal is a different question…I’ll bet it makes some difference for them.

There’s also nothing wrong with offering a Radio feature that works best with Tidal, especially since it works so much better than the one that didn’t work with Tidal.

I’ve tested Roon 1.6 with local content only; with Tidal; with Qobuz; and with both Tidal and Qobuz.

It’s not about the provider… it just works better when there’s more fish in the pond.

I’m sorry if my post came across as pejorative. I’ve not been feeling well and was very likely far more cranky than my usual self.

Were there other posts of mine that chapped your hide?

I’m a lifer and quite happily using Roon with Tidal everyday, all day.

Were there other posts of mine that chapped your hide?

No. Not your fault, I’ve been out of sorts since the news from Christchurch. Ordinarily I wouldn’t have been so snippy. Let’s listen to some music.

I’ve set up a Roon Radio session based on one song “Masseduction by St. Vincent” several weeks ago and since that I’m listening to this radio selection almost everyday during 30 to 60 minutes.
Each day, Roon keeps playing the same songs from a short selection of albums (that I added in my collection the last monthes and that I’m listening to without radio).
Sometimes, a Tidal track of an artist that I don’t know is played but that is rare compared to the local tracks picked (that I know well).
When I begin to skip tracks (not thumb down) that are repeated each day, Roon seems to select more things on Tidal for a while but keeps going back to local tracks.
Even when using the thumb down, Roon seems to suggest some tracks very often, even tracks already played less than 15 minutes ago.
The most puzzling thing is that the most repeated local tracks are from artists with many other albums most of the time. But until now, Roon doesn’t seem to have interest in albums I’ve not listened to for a while (or never listened with Roon).

Another annoying thing is the inability to interact the same way with radio on Android and Windows.
When a track is played, there is no way to give feedback to Roon Radio with android app. If it’s the case, I haven’t figured out how to do it.

Has anyone noticed the same behavior ? I’m open to any suggestion to teach Roon Radio to be less predictable.

What roon version are you running?

Can you also post a screen shot of the radio area with seed listed.

Im not sure many people would keep using the same seed song for that long. I certainly don’t as my mood changes or audience changes I swap seeds.
Remember radio is based on what lots of people have listened to and their paths from song to song, not on what is in your library. If the song that the algorithm suggests is in your library it may play it but it isn’t going to play songs just because they are there; only if they are suggested by the maths. As I understand it your liking/disliking affects the algorithm as a while not your particular instance.
If you go to the radio tab in android I think it has the like dislikes there. (Not at home)

@wizardofoz
I’m using the last version of Roon.
I’m not currently @ home but I will post the screen shot later.

@ged_hickman1
I understand what radio is and I don’t expect him to play mostly songs from my library.
The main problem is that Roon Radio suggests always the same tracks.
Maybe should I start a radio with a less focused seed (just an artist for example) and watch if suggestions are less repetitive.
On android you effectively have the thumbs up and down in the Radio tab. But it’s only for the next song suggested. If the song that is currently played has been chosen by the radio you can’t tell Roon that you don’t like or want this song. It is possible on Windows since the thumbs are present in the now playing screen.