I really like Roon Radio and it has improved a lot since it was introduced. But for the last couple of days it has been completely useless.
After Bach’s mass in b minor it played smooth saxophone jazz by David Sandborn, followed by Sean Paul’s Jamaican dance hall music.
On the remote on my iPad Pro it says that Roon Radio would not be able to find matching music because the feature would be limited to my library.
Both is untrue: roon radio is not limited to my local library in the settings and even if it were, There are about 300 to 500 records in my library which would be a perfect match after Bach’s b minor mass…

Are you having global issues with Roon Radio or is it just me here?

A similar issue. Roon Radio seems to find a small selection of artists (maybe 10) to the last track played, and then ‘that’s it’, selection of tracks from those 10 ‘similar’ artists (similar being a pretty broad, vague description) from pretty much the same 1 or 2 albums of those artists. If my recollection is correct, Roon Radio in v1.7 had a much broader capability. I recall one session where the last track was a Joe Bonnamassa blues track; the next day I discovered 20 new blues artists using RR.
Today as a comparison, it’s playing music similar to Derek & the Dominos - Layla; I get John Lennon Plastic Ono Band, Bob Dylan, The Who, Jimi Hendrix, Led Zeppelin, Lynyrd Skynyrd, Van Morrison (?), a couple others - then rinse & repeat. It’s like I’m listening to the local classic rock station. That’s the only artists that RR can locate between my library & Tidal that are similar? My understanding of the AI of RR was it searched out similar artists but different than what was in your library. Or at least that was how it seemed to work with 1.7 (at least to my recollection).
Is it just me, or are others finding RR lacking ‘something’ since 1.8?

Thank you for your addition. At least you get rock when you start with rock (in a wider sense). Roon Radio in my case is jumping from baroque choral music to smooth jazz to Jamaican dance-hall and next stop is world music

I don’t get it… Neither have I limited Ronn radio to “library only” nor don’t I have music in my library which would not match baroque vocal. I have tons of it… I really don’t get it! Roon Radio - not having to be DJ all day long when music just plays in the background - was one of the key features for me in the software. It worked great all along. Now it has become useless and I don’t understand why?

So here’s a definitive glitch - thought I’d try something more calm, laid back for Roon Radio to work on. Track; Forest Whispers by Alexander Valentine (a Tidal item) - BUT apparently there is ‘nothing similar to play’ - HUH?!?! nothing similar to acoustic guitar available? REALLY! Yikes - this (to me at least) proves there is a major bug in the IA that runs Roon Radio. Especially when I consider it was through Roon Radio I originally discovered this track.

I’m sorry we weren’t here right when you posted about Roon Radio. There has been an instance when Roon Radio didn’t perform as expected. This should have been resolved

Please, do let us know if you’re still running into this

Sorry to report, but the issues have not been resolved. At least not for me. I updated all my Roon devices yesterday (ROCK on NUC and 4 or 5 remotes) and after your post I was hoping for the solution.

So again I testes, starting with a record of J.S. Bach’s music. It took Roon Radio 3 or 4 tracks from Bach’s vocal church music to The Prodigy’s hardcore techno music, next was some kind of gangsta rap I did not even know, after that Franz Schubert’s “Wanderer” for solo baritone and piano accompaniment, followed by (and now playing) Meshell Ndegeocello’s Fusion Jazz.

Sorry, I am still loving Roon but one the major asset of Roon for me is Roon Radio and unfortunately it has become completely useless somehow.

It might be a useful data point for Support if you could post a screenshot of an extract of your History; starting with the last few J. S. Bach tracks followed by the Roon Radio journey from there on.

Here is the screenshot. The first title on this screenshot is the last title I intentionally played… From the second title on it was all all Roon Radio’s choices. 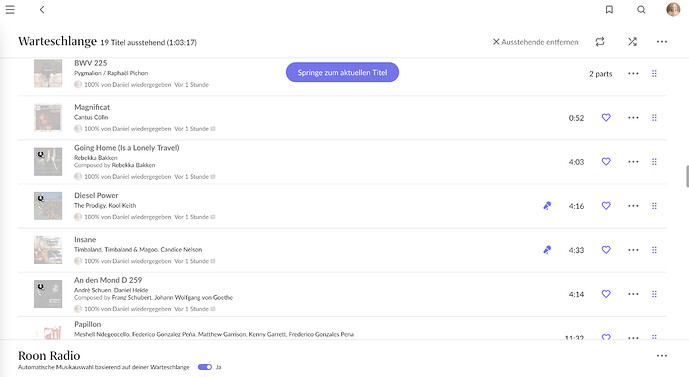 I appreciate the follow up and your response to @Geoff_Coupe’s request (thank you @Geoff_Coupe!). I’ve passed this on to our technical team, so they can take a look and suggest next steps.

Sorry, yet again, for the delay. Things are starting to look up and we’re confident our reply times will be much much shorter