Roon also no longer shows a volume control for the T+A MP 3100 HV instead saying it’s fixed volume in the Roon client UI. But when I go into device setup it says it’s device volume!

Have you rebooted everything?

Yep, rebooted everything, NUC running Roon, the T+A kit, and the router. Just done it again for good measure and now although the T+A kit shows up as a roon ready endpoint, when I queue files to it nothing happens ie nothing in the queue, although I get a info of “Playing 11 files”, I can play to other devices for example the iPad I’m using. And I can play internet radio or Qobuz direct via the T+A kit so I know it has a good network connection. It’s since the Roon 1.7 update that I can’t stream to the T+A kit with Roon. The reboot of everything has at least brought the volume control back for the endpoint, even if nothing will play.

Do you receive any errors in Roon when this happens? If so, can you share a screenshot?

No problem just reproduced the issue at 12:24 GMT I get no error messages, just says queued 11 files, but left with nothing playing as you can see in the screen shot 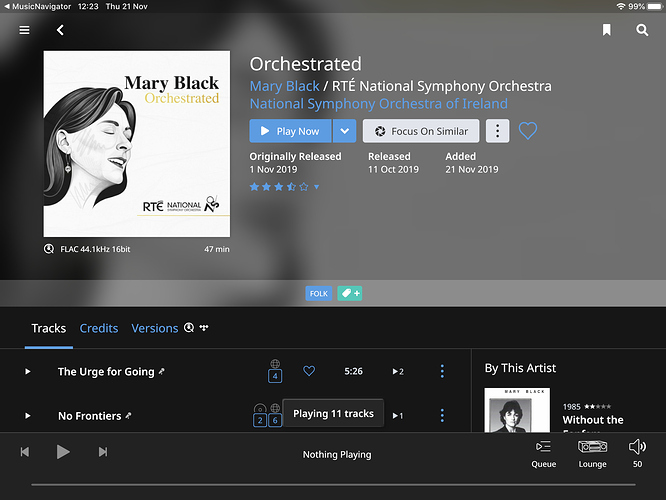 OK just tried again 13:08 GMT same thing says it’s playing the files, but nothing queues to the T+A. Hopefully some useful debug captured now. Again after trying to stream Roon to the T+A over ethernet, the T+A effectively crashes and has to be power cycled to play any other digital source.

Do you have another machine that you can temporarily use as your Roon Core? If so, can you switch Cores and try playing to the device from the new Core?

Only thing I could do is temporarily transfer the license to my Mac and use that as a Core, rather than ROCK running on the Intel NUC. Is that worth trying? I don’t have a spare NUC, so I would not be running ROCK and hence not sure it’s a valid test?

As soon as the new 1.7 was installed into the Nucleus both of my T+A music players (MP 2500 R, MP1000 will not playback via Roon. It will playback from the T+A app.

We’ve looked into this and confirmed that there appears to be an issue with Roon Ready playback to T+A devices after the 1.7 update. The team will be reaching out to T+A and working with them to resolve this.

We appreciate your patience, and apologies for the trouble here.

Glad to hear it’s not just me. But sorry to hear you are having the same problem. I’m hearing from friends in the HiFi industry that a lot of users have been affected.

After updating the Roon from 1.6 to 1.7, it finds the T+A MP2000R MKII, but it can no longer start a song. Other bridges like RaspberryBridge work without problems.

Description of issues
After updating to the latest Roon release today I can‘t connect to my T+A MP 2500R anymore. I start my T+A MusicNavigator 1.1.0 / 3 , select Roon Ready which starts Roon 1.7 which connects to the Core on Windows and while it enjoys overall network connectivity it does not connect to my T+A Network streamer anymore. This worked well prior to the upgrade. All it offers is my iPad …

Update: after appllying the latest T+A firmware update Roon finds the T+A device again. However, when selecting a music title no music plays, it stays at 0:00. Selecting another title nothing changes, the prior title is still displayed and won’t play …

I received an email from you to report on a fantastic update and after all… everything got worse.
When proposing an update, you should provide the possibility of reverting the entire process to the state prior to the update in case the update has serious defects.
In addition, T+A device users are used to a flawless operation and without technical or software failures.
I recently acquired this Roon license but so far, I must say that the experience is not especially rewarding.
Best regards

Jose, your reply is confusing to me.