Hi, I recently purchased a used NUC – Intel NUC NUC5i5MYHE. It came with 16 GB RAM and 128GB SSD (I know Roon will only use 8GB Ram but that’s what it had on it) It also had Windows OS on it.

I have completely followed the Roon Rock installation guide and have run into a problem.

Could the problem be the windows OS on the NUC? Do I need to format the SSD first before trying to boot from the Rock image on the USB stick.

My music is stored on a NAS. I currently run Roon on a laptop very successfully but wanted to move it off the laptop to a NUC. I have in excess of 10,000 tracks.

Can you help?
Thank You
Don Hampton
[email removed by moderator]

If you have set it up to boot from USB then you shouldn’t need to go into a boot menu, just let it boot.
When you created the image using etcher did you select the ‘make it a bootable image’ option?

I am concerned that you didn’t download the correct software and hence don’t have a bootable USB stick. You get it from here and I have just checked it points to a img.gz file to download.

Still doesn’t recognize the usb stick as a bootable drive.
Again, do I need to reformat the ssd before attempting to boot with the roon image?

When you boot from the stick and begin the installation process, it will re-format the drive as part of the process.

I think you are not getting a good bootable write.

Edit, as Tom mentioned, my instructions differ. So I’ve hidden them until I can review them. They were created during the release of ROCK last year, and while I’ve tested them and I know it works, if a part is not needed anymore, I want to remove it from my instructions. FYI, Etcher was not the first recommended program to create the ROCK bootable USB key.

Those instructions conflict with the Roon knowledgebase article I linked to above. Roon says using windows don’t uncompressed the downloaded file, your instructions say to unzip it although I don’t think it will make any difference, it is just unnecessary. I still go back to the OPs first post where he says he downloaded an uncompressed image file. This should not be so I really wonder what he has downloaded,

ok, I started all over and followed the instructions above to the letter. I was then able to boot from the usb and
apparently the Roon os is installed or partly. I got the message that Roon os install was complete and to remove
usb and hit enter to reboot. I did that and the screen shot show what came next and it goes no further.

According to the install guide, I should see a screen with the NUC ip address - it didn’t get that far.
Here is a screen shot of where I am on the NUC: 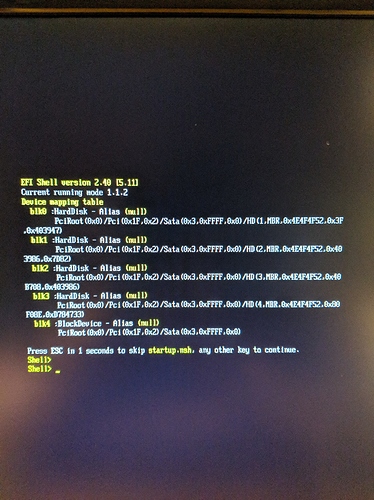 How should I proceed?

Ok, I got past that - I had neglected to re-configure the bios for Roon. Once that was done, I got the ip adddress of the NUC and was able to connect via web browser on my main windows pc.
Now for the codecs – which seems very confusing.
At any rate, progress is being made.
Thanks for input

ok, all is good and working as expected
Thanks for your help