Rock (last version) is having serious issues with connecting to audio devices. Had various other issues. I reinstalled (using the Rock web interface), reset the database/settings, etc. All seemed fine. Even could configure audio devices, which now all disappeared. Cant’t manage the either. Disconnected the USB DACs, reconnected, restarted. No success. 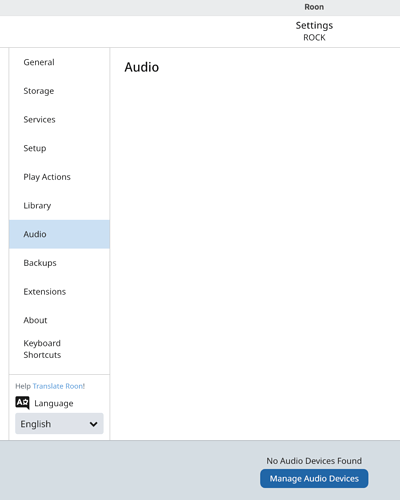 This is really rare, but usually happens in the case of a corrupt db that is preventing the rest of the Core to load up.

Do you have older backups you can try to restore from?

I had all of my audio connections disappear. Reinstalling the ROCK operating system worked for me. YRMV

I tried to restore. It did not help. Resetting the database (via the web portal) failed (exit code 2) at least that was the message I got. But it seemed to do something because I had to reconfigure, but that led to nothing. Same issue.

Now trying to restore an even older backup. The SMB share had fewer folders in the root of Data. Will come back if this restore helps. Previous restores seemed to worked but at a later stage led to the same issues.

Resetting the database (via the web portal) failed (exit code 2)

Really? It is a brand new one. Is there a way to check this?

BTW, the restore of the older backup helped. All seems okay now. When this started I noticed a strange thing in the file system of the SMB share (Data). Somewhere in the folder structure (in InternalStorage and then a folder with music in it) the root folder structure of the Rock appeared.

Could it be that the file structure of your SSD has become corrupted? I had something like this happen to me a while back:

Hello @support. Something odd happened today. I had added 4 ripped CDs to my library (and they had showed up in the overview). Later we started playing music (not the new albums) and all was proceeding normally until suddenly the music stopped. I went to a Roon Remote, and noticed that Roon was saying that it was importing thousands of new files to the library. The Roon Core (1.5 B363) runs on a fanless ROCK NUC - and this was running hot - not its usual gentle warmth. The library is held on an…

Could be the case, Geoff. I also saw that not all folders were there (RoonServer for example was missing). That is why I reinstalled ROCK (via the web portal). This was successful. But then the issues started with he Audio Devices. Now all seems to be stable, but loading the Overview page takes longer than before.

Sorry, I don’t. You might want to open a support case with Roon Labs by making a post in the Support Category of the forum, and giving details of your setup and network. They can advise you better than I.

Ok. Thanks. I will monitor it a little more today and depending on what I see contact support.

Could this also be a bad DIMM? I actually had that problem with my ROCK build…confirmed by booting Ubuntu via thumbdrive and running memtest86+. I just don’t recall the error code that I saw when restoring the database.

Thanks, David. That is a clever way to check the status of the SSD and DIMM. Will try this.

Sure. This takes several hours to check the memory (RAM DIMMs). I’m not aware of a similar test for the SSD.

What’s more frustrating is that I’m not only using this for personal use, but reviews. I am currently reviewing the Ayre QB-9 Twenty DAC with it, but cannot see it now. I don’t have backups. What can I do?

For me the issues were solved putting back a backup. Not the most recent one (that was corrupted too, I think), but an older one.

Thanks! I found a backup and restored it, then did another restore after it worked. Problem solved!