Hello. I have just installed roon rock to a pc I have built. I understand that rock is designed for NUC, but hey ho it installed ok.

I guess where there is a problem is roon only sees one internal drive, I have connected up four ssds, in the hopes of running my library from here. I saw one and offered to format which was great but what about the other three?

I did the roon rock clean installer thing this is not running on a linux OS or anything.

Like you yourself stated, ROCK is designed to work on standard NUCs. So it installs on one drive and tries to format one other. The only way to use your drives with ROCK is to hang them off the machine via USB.

Thats a real shame. However I remembered I have a raid card knocking about. lets see if I can really screw this up

Was just thinking the same thing. Wonder if a raid would work…

I actually have a couple of raid cards one is dell and the other megatrends, just trying to work out JBOD as these are mixed capacity.

How does such a card present itself to an OS? ROCK doesn’t carry any bloat other than a few non-NUC specific network drivers.

Couldn’t agree more, as I have successfully built a raid, but Roon does not see it.

My remembering of NUCs was they were tiny, so surely the additional internal drive is going to no more than 2tb, so it seems a little short sighted.

Can rock be installed on a linux OS and all drives be seen ok? Thats my only other option at this stage I guess

That being said the raid card should handle the grunt work and present Roon with a single drive surely?

ROCK is a Linux micro distro that has been built from the ground up and tweaked carefully for one purpose only: running Roon Server on a NUC with minimal user interference, creating a carefree, appliance-like experience. It may run on other systems, but no guarantees.

You can run Roon Server on a ‘regular’ Linux install just fine – see the LinuxInstall page in the Knowledge Base for all the information you need:

I see roon server itself has no gui, but can it be accessed and configured from the web like the rock?

No need to: after installation Roon Server is configured and updated via a (any) Roon Remote (PC/Mac, tablet, phone).

For ROCK, the web interface is the only way to control the system, as there’s no prompt. A Linux installation is easily administered over SSH.

Thanks for that. I’ll give it a go on fedora

Got it on DNF

It says its all installed and should be running, however the roon app on ios just says looking for roon core

Is ‘Core’ the server?

Yes. Do a reboot.

Tried that twice and turned off firewall

IN terminal I started the server, it didnt say either way if it was already running

Turned on all sharing things and ensured the network interface was available to others. 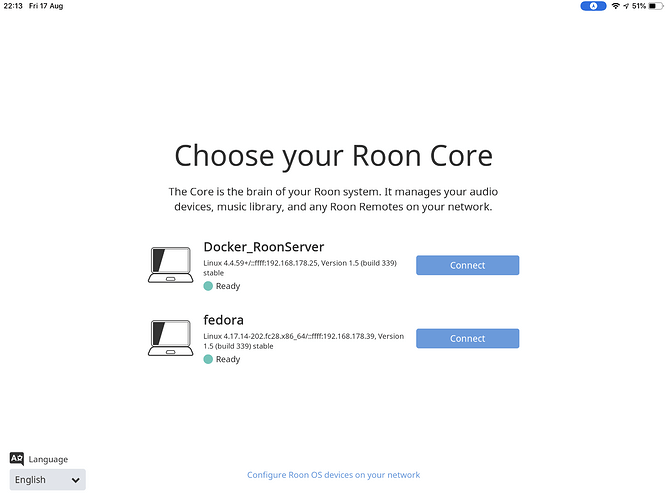 He’s complaining about iOS seeing it. Both Android and iOS have known problems finding the Core (see the Android megathread on that here, for example). I bet if he uses a PC or Mac, it will be found right away.

That said, many Linux distros ship with the firewall enabled. Roon installation does not add any exceptions for itself to the firewall. Further, some of the endpoints supported use SSDP for discovery (like Sonos), and SSDP really doesn’t play well with iptables in Linux. So best thing on a Linux Roon server is to just disable the firewall outright. (Which makes me cringe to say it, but after many hours of trying to trick iptables into reliably identifying SSDP responses, I gave up. And I’m a network engineer by trade… SSDP is just a really broken protocol.)