First of all; Wow! Great app. Lots of things to discover. And there’s always more…
Just puttin’ on some music, a few clicks… aaand 3 hours gone.

After seeing Roon at a friend’s place I was sold.
It was just the hardware-part that had me worried.
But hey, there’s a trial, just try an see what happens!

My music-server - with JRiver - is a 2009 Mac Mini Intel Core 2 Duo 2,26 GHz.
Installing Roon was no problem. Pointing out the music folder was a bit harder though.
Importing, getting the meta-data straight, it all took quite a bit longer than on my friend’s new Mini.

Long story short; after giving it some time, it is running nice and smooth now.
Headless Mac Mini 2009, closed the Roon window. And Playing from my MacBook Pro.
So if you worry about your antique hardware, a Core 2 Duo seems to do the trick just fine.

I have the same vintage Mac Mini with 4G RAM (music files on Synollogy NAS) that I have been using with Roon for a few weeks. A couple observations:

Any thoughts out there? I am wondering if I need to upgrade my Mac…

Since Roon Server became headless, it runs even smoother than before.
I have no reason to upgrade my Mini at this point.

What are the sizes of your libraries?

I have about 2400 albums using over 900 GB (mostly ALAC but some FLAC as well). EricG, how much memory on your Mac? 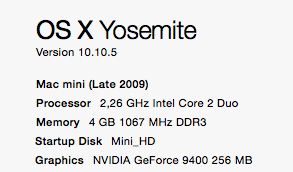 Thanks - exact same as mine

same mac (only 2GB of memory) with synology - 1TB+ music library - runs with zero problems. maybe you should check out your network perfomance.

That would be my first guess too.
I have a wired network thoughout the house, all audio hardware cable-connected.

I’ll investigate the network - thanks for the suggestion. I use a ethernet cable to the router, so I’ll try wireless or maybe a different cable.

I’ve had problems with Pure Music 2, but JRiver has worked flawlessly. I’m still puzzled why Room uses more memory the longer the app is running. Right now, it is using 1.3 GB of RAM and it was under .8 GB when I started it up yesterday.

Sorry to resurrect but I have one of these machines gathering dust and am wondering if you are still happy with Mac Mini 2009 performance?

Hi Denis, it’s no longer in use. Quit Roon for a couple of years, music alltogether in fact.
In fact, I re-installed only yesterday. Got hold of an i5 12" laptop, installed Linux on it, and that runs smoothly.

Hi Eric - thanks for the reply - I might try something similar