Roon runs on PC but nothing happens

Hard to give details when nothing much happens to be described. I have had issues from the start with Roon opening to a blank white window or “not responding” and have reinstalled a couple of times in a vain attempt to fix this. Now whatever I do, clicking the Roon icon in the taskbar starts something somewhere but nothing appears on the screen and the iPhone app just says “Waiting for remote core”.
Task Manager says Roon is running… Grateful for advice a 71 year old with Alzheimers can follow.

And a question, is it possible to remove the PC, Windows and above all Microsoft from the equation and have the core running on the Raspberry Pi that runs the Allo Boss? If so some easy to follow instructions would be greatly appreciated. Many thanks.

While you’re waiting for a member of the Support team to respond, could you perhaps clarify a few things for them?

Lastly, it is not possible to run a Roon Core on a Raspberry Pi. The starting point for a “Roon Music Appliance” would be to install ROCK on an Intel NUC system.

You said that your Allo Boss is linked to your PC by ethernet cable. Do you have the Allo Boss directly plugged in to your PC, or do you mean that it is plugged into the Virgin Media hub (along with the PC).

You have only installed the full Roon Package for Windows, and not also installed the Roon Server package as well? See here for the list of packages.

When it works I get a graphical window on the PC which allows me to select and play music, so I guess this must be the full package.

Does your Task Manager readout for Roon look something like this?

Are you using Windows Defender as the Firewall on your PC, or are you using a third-party package?

I thought Defender was an anti-virus program. I use Webroot for that. Whatever the firewall is called, it came with Windows, I haven’t installed a separate one. If the firewall is the problem then it is an intermittent one.

Lastly, it is not possible to run a Roon Core on a Raspberry Pi. The starting point for a “Roon Music Appliance” would be to install ROCK on an Intel NUC system.

Shame about that. Not a practical solution for many reasons.

Whatever the firewall is called, it came with Windows

OK, so let’s check that the Windows Firewall is letting through traffic correctly. Sometimes, usually after a Windows Update, these settings can go awry - it’s Windows 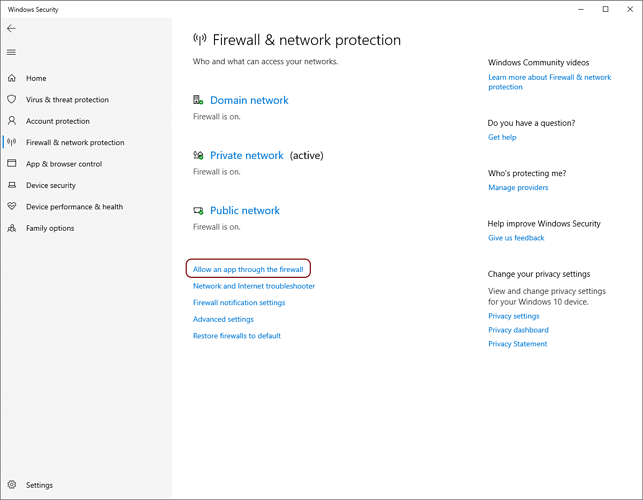 Click on the “Allow an app through the firewall” link, and you should get this screen: 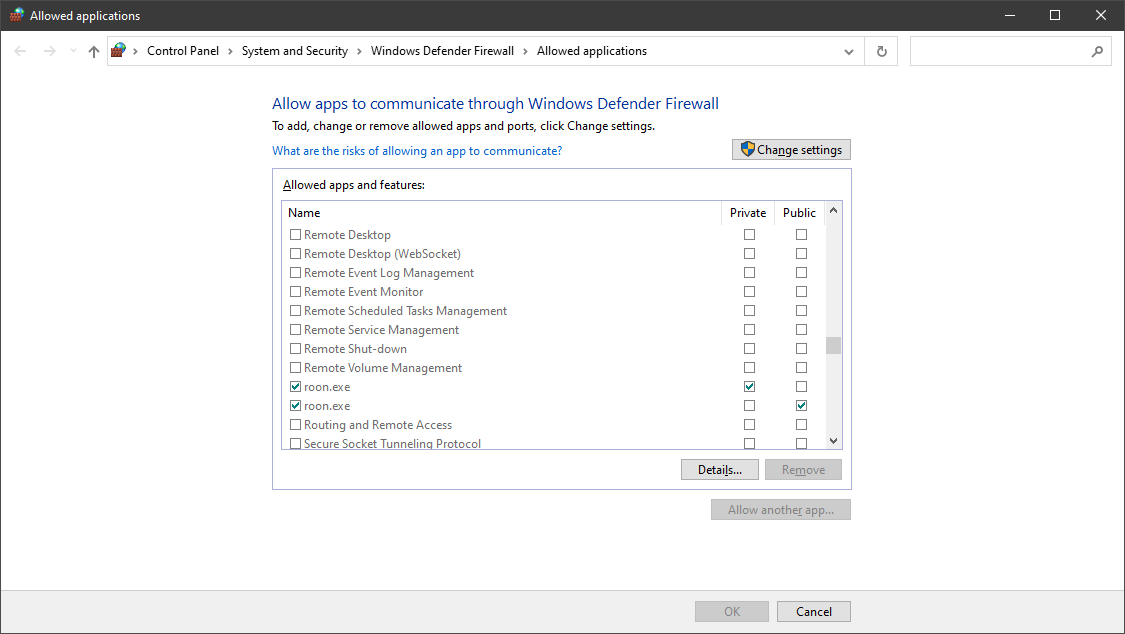 Scroll down and check that the two entries for Roon.exe are present, and one has “Private” and the other “Public” checked.

I play music to my PC, so I have enabled the PC audio device to be a Zone in Roon, that’s why I have the RAATServer entry in Task Manager (and there are also two entries for it in the Firewall list with the same settings as for Roon.exe).

You may not have set up your PC as a Zone, which would explain why you are not seeing the RAATServer entry in Task Manager.

Thanks again. I have one “raatserver.exe” and a single “roon.exe”, and both are ticked private.
Whether or not it was like this the last time I successfully used Roon with the Allo Boss and the iPhone app, I can’t say, I had no reason to look.

So are your double-entries linked to the same exe file, it’s just that one is private and the other public? Or are these exe files somehow separated within the system and need to be carefully chosen with the file picker? I vaguely recall setting up the PC as a zone too, for use with headphones . But that was in the zone of missing memory between half an hour and a year ago.

So are your double-entries linked to the same exe file, it’s just that one is private and the other public?

Exactly - same file; two entries: Private and Public. Both are necessary, AFAIK. Put it this way, my setup works.

Thanks again, on to the next question. Windows won’t let me add another Roon.exe. See screenshot. Do I have to uninstall and reinstall so the the program setup can do what Windows won’t allow me to do? 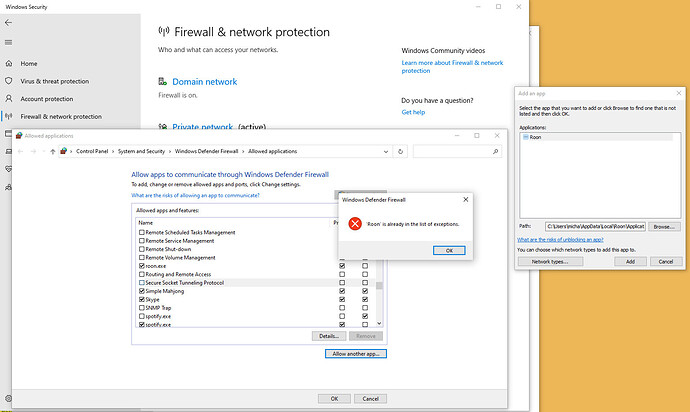 Answering myself here. I eventually managed to get the firewall to let me tick both boxes side by side, which isn’t quite the way I read your earlier message. Still nothing happened so after scratching my head for a while, doing the washing up, and planting a dozen coriander seeds (hey, it takes all sorts) I hit on the idea of restarting the PC and as if by magic, this time Roon starts up as it used to until recently.

Of course now I can’t play any music because She Who Must Be Obeyed is watching endless repeats on TV yet again, but never mind… Thank you so much for pointing me in the right direction.

Glad it seems to be now working. No idea why I have two entries per program in the Firewall list, while you can get both boxes ticked in the one. Microsoft moves in mysterious ways most of the time, I find…