I’ve been running Roon (latest version) for a quite a while but have recently encountered a problem that I’ve been unable to resolve. I had my IT guy in my house recently to work on my network but even he could not explain what was going on.

Basically, when Roon is running on the Mac Mini it recognises its built-in output and the connected DAC (computer speakers), as well as seeing everything else on the network (i.e. Antipodes Server, iPads, and my MacBook Pro, if running). Normally, when the Macbook Pro runs at the same time, it sees both the outputs on the Mac Mini and its own outputs (eg. the built in speakers or connected DAC/headphone output).

Now, the following problem occurs. When I run Roon on both the Mac Mini and the MBPro, having started Roon on the Mini first, the Mini does not show the MBPro’s outputs anymore, and the MBPro shows only the outputs of the Mac Mini (but not its own; they have disappeared).

The same happens in reverse if you start with the Mac Mini and subsequently open Roon on the MBPro. As I am writing this post on my MBPro with Roon running, I cannot currently send any music to my DAC (headphones) connected to it, since Roon only shows me the Mac Mini outputs. I would need to go over to my Mac Mini and close Roon for the outputs on my MBPro to reappear again.

Any suggestion how to resolve this would be greatly appreciated. Thank you.

PS.The main system with the Roon server installed on the Antipodes CX server is always present and available for play when Roon is open on the MBPro and/or the Mac Mini.

Are you sure your not running the full server/remote software on both? This might confuse things. What is your network topography?

Thanks for your reply.
I’m running the server software on the Antipodes CX server (the Core) and the Roon software on the Mac Mini and the MBPro, and the remote software on various iPads and iPhones. I’m attaching two screenshots taken just now on my Mac Mini: one of the General Settings showing the Core, the other of the Audio Settings on the Mac Mini, which, erroneously, show the MBPro as a built-in output of the Mini and as “connected to this Mac”. This is wrong, of course, since the MBPro is not connected to the Mini. The Mini’s actual connected output (the Fenik’s Essence DAC/speakers) is not detected, and currently I cannot send audio through the Mac Mini to them. The moment I close Roon on the MBPro, the Mini’s DAC/speakers show up again.
I can’t get to the bottom of this, but I suspect there is probably a very simple explanation.
Thanks and all the best, 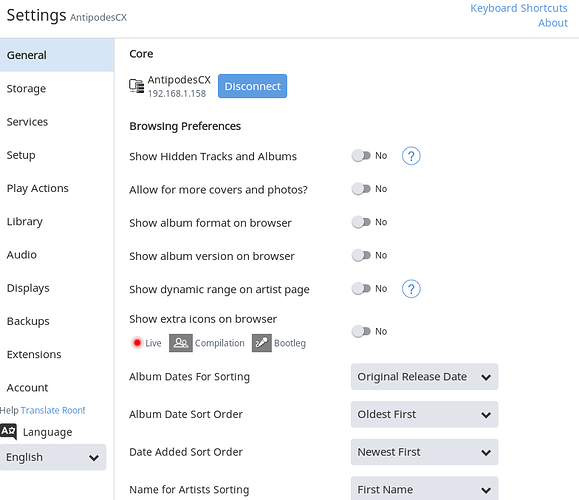 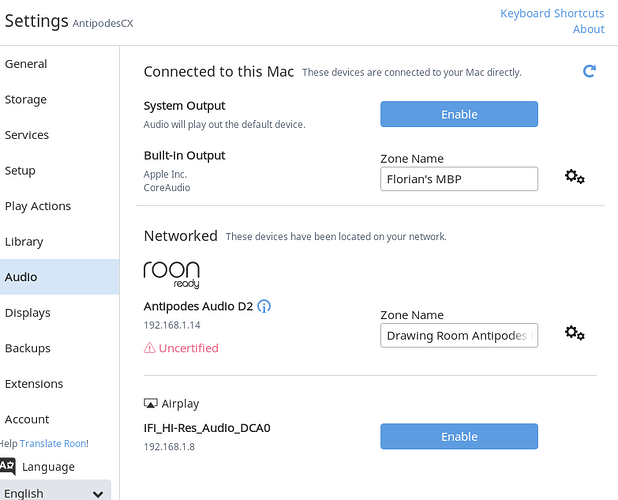 Please check IP address of each of the Mac’s just to rule out basic network issues or conflicts. Have you tried unenabling both and then see if they show both show up? Have you tried just installing the Roon bridge software and not the remote software on the Mac’s ?

Could you post the second screenshot again, but without the MacBook Pro running?

Is there any chance you used Time Machine or Apple’s Migration Assistant to clone the OS of one of the machines to the other? When this happens it can interfere with Roon’s ability to identify the machine properly if both of the machines are used for Roon.

If you use a separate remote on one of your iOS devices how do things appear? Are you able to see both Mac devices? Only one?