Roon selects lossy files for playback when lossless are available - how to fix?

I thought about this a bit more and spoke with the team. There are a number of factors that go into which version is displayed by default, not only quality. Generally there should not be the expectation that the highest quality version will always be the one that is displayed. That said, I can see how the default behavior is currently resulting an a scenario that is not ideal for you.

While we do not have the option to customize the results preferences, I’ve asked the team to look into this more closely to see if we can make cases like this better within the current functionality. I can’t make any guarantees or promise any timelines, but I’ll make sure it is looked into.

Thanks for the feedback, Cristian!

@dylan I talked about selection of tracks/album for playback, rather than display as in your wording. Indeed, if I search a given album , press play and it plays an “inferior” version quality-wise, it wouldn’t be the end of the world. (Though for people that play a track-by-track, it would be annoying)
So in the examples given, I used search-and-play because it’s easy to show what gets selected for playback. Easy to reproduce

However, where this begins to hurt is Roon Radio. With my maximal Qubuz subscription & minimal Tidal, I get a LOT of tracks played being lossy. (> 30 %, I reckon)

Further, I think with Roon it’s still easy now. There are only 2 streaming services available. And the majority of people using Roon have lossless subscriptions to them. But what if there would be 3 services? What if the next service won’t even offer losless quality?
I think that now would be a good time to begin devising an iron clad solid track selection algorithm. I’m sure it’s not something that can be done overnight but it should be one of the aims of Roon as it’s true to its mission of prioritizing playback quality

i don’t think this should be slotted as a feature request. if i have multiple versions of a track/album, i would expect my music player to pick the ‘best sounding’ one to play by default. how the player selects the ‘best sounding’ version could be up for deliberation but not the act itself.
i am a pretty new user and came in with the expectation that roon would indeed be the rolls royce of music management. i am enjoying roon aplenty but some of these inconveniences are annoying to say the least.

Whether is labeled as a problem or feature request, it shouldn’t be too important. What we want is just the quicker path for this to get resolved/implemented, right?

But as you probably noticed, I didn’t create the feature request (yet), in the end.
Mainly as it seems quite a bit of work (which is surprising to me) to explain the issue to others.
I guess people just don’t use Roon Radio or enoungh to be terribly annoyed by this as I am… Or use just Tidal or just Qobuz alone

this observation is not limited just to radio. when you search albums, you would see similar behavior. 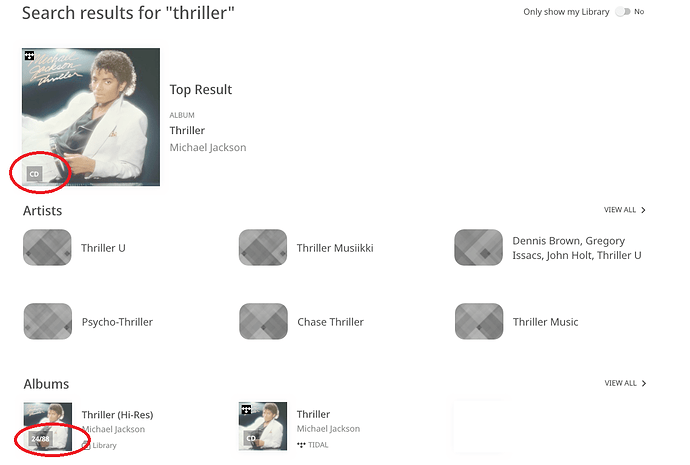 Of course.
But when you search, manually selecting the best quality version for playback takes a few actions (some 2-5 clicks, i suppose)

With Radio, it’s virtually impossible to select the best quality version. So it hurts more here

…Roon seems to check the sample rate of all the available variants for an album and picks the highest one.

This is by design … and should ensure that the highest quality available version of a track is selected.

Can you give a specific example where Roon selects a lossy version over an available lossless one.

The most glaring example is when there’s TIDAL 16/44 MQA and Qobuz 16/44 true-redbook available - Roon would pick the MQA version even though it is inferior.

Ultimately the solution is to unsubscribe from TIDAL.

Ultimately the solution is to unsubscribe from TIDAL.

Exactly what I did months ago