Roon Server attempts to start and does not complete the start-up sequence. This occurs on a continuous loop. This sequence shows in the Antipodes system log: 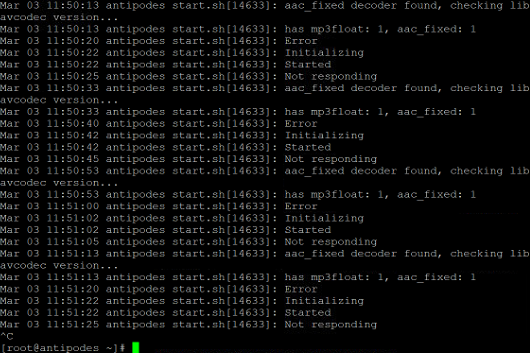 This issue has been occurring for several months, starting roughly around the time my Roon subscription was due (not sure if this is relevant). Roon Server had not stated during this time until spontaneously starting correctly a week ago; server had then been operational until yesterday when the behaviour returned.

Roon Server has been reinstalled by Antipodes several times and no other customers report this issue.

Is the behavior the same if you disconnect any USB attached devices to the Antipodes and try to reboot it? Do you by any chance know how to access your Antipodes Roon Logs folder? Logs would help us clarify what’s going on under-the-hood.

I don’t have any USB devices attached. The Dx2 is connected to the network via Ethernet and the DAC via AES3.

Tony form Antipodes pointed me to the logs. I can certainly copy and drop them somewhere.

Tony also mentioned that you can contact him for further info.

I will send you a private message on where you can upload the logs, thanks!

Thanks for sending those logs over. I took a look through them and unfortunately it doesn’t look like there’s much information contained in them.

It looks like Roon is starting as expected until it tries to mount the storage locations. I have a few follow-up questions:

Now, for the weird stuff. This sort of issue was occurring a while back, but continued a bit further into the start routine, until it tried to mount the back-up, then failed. Even though the log mentioned lazy mounting and such, the process would fall over until I started the back-up NAS. Recently, the NAS has been started and the problem persisting. Maybe not at all related; mentioned just in case it matters.

Will get back to you shortly.

Do let me know if the other suggestions trigger any change in behavior.

I don’t think so. Can you point me in the direction of instructions to do this?

You should be able to do this via the Antipodes WebUI, but you may want to reach out to Tony for more precise instructions if you don’t see this option in the WebUI.

I have had another look at the Roon Server logs captured in remote login session recording. I suspect that there is bad data that may be causing this problem.

As part of the attempt to resolve we deleted/reinstalled the Roon Server app. It started OK and then scanned in the music library. After it had scanned 869 tracks, and while it was still scanning, I changed a Roon Server setting in the Antipodes GUI and saved the change. This caused the app to restart, and it immediately reverted to the behaviour of repeatedly starting then stopping, displaying ‘error’ instead of ‘running’.

The music library on the Antipodes internal drive was the only data source accessed.

I suggest that I log in remotely again, check the points that @noris has raised, and also look to see if I can find any data in the referenced folder that looks ‘fishy’!

I suggest that I log in remotely again, check the points that @noris has raised, and also look to see if I can find any data in the referenced folder that looks ‘fishy’!

Sounds like a good plan to me, let me know if you need our assistance after the remote session. I would try temporarily disabling some of the storage locations in case it’s related to media. If you find any logs which mention [analysis] traces, please send them my way and I can take a look.

I logged in remotely, deleted and reinstalled Roon Server (which was failing to start), and then allowed Roon to scan in 9661 tracks from the Antipodes internal storage. When this completed I then did a ‘Force Rescan’. This identified eight tracks that might have been corrupt. The first seven ‘possibly corrupt, unidentified format’ are listed here:

The eighth track was slightly different:

Several of the corrupt tracks had been processed with dbPowerAmp, and @Raymond_Daniel thought copy protection might also have been associated with the initial capture.

The logs of the full music library scan have been saved on the Antipodes and can be made available for download if required. However it seems the problem has been solved.