I updated my Roon Rock core and Android remotes yesterday when the latest update was released, and ever since then the Roon Server Software is stuck in a “Not Running” state. I can access the web portal to click on the Start button, but it keeps coming back with a restart error and tells me to contact support. It was running reasonably well until the update. Nothing else has changed. This is yet another issue with Roon, and it’s getting really old, really quickly. A prompt response would be appreciated. (My previous support thread that I started about 12 days ago remains unresolved.)

Can you share a screenshot of what you’re seeing on the Web UI?

If you reinstall the OS there is there any change? Any change after a reboot?

Hi Dylan
Reboot does nothing. With regard to reinstalling the OS: I was under the impression that this would reformat the internal SSD which holds all my music. Is this not the case? 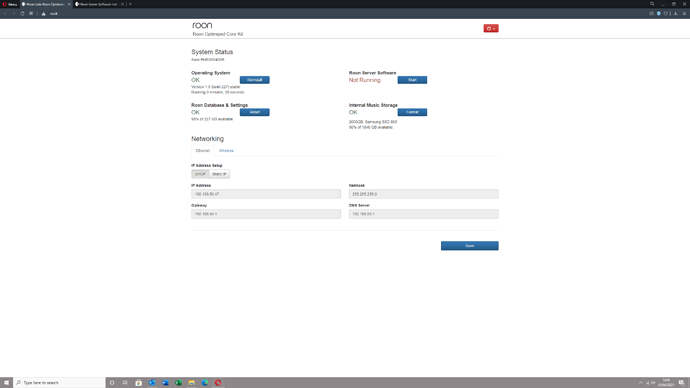 I’m on a phone so could see perfectly, but it may be your SSD is full or nearly full so your reinstall or update won’t work.

I’m surprised it’s full though as the ROCK guide said it’d never get near 128GB. Maybe you have a different install to me though.

I don’t know how to fix this though. I’d try reinstall of the OS (to upgrade to a newer version) then restart Roon Server if SSD space allows it either to run.

Do you know if the OS reinstall wipes the second (internal storage) SSD on a NUC?

No, it doesn’t touch the music storage (or blow away your Roon settings and database) - so you can try the Reinstall (the OS) button to see if it helps.

Thanks Geoff - much appreciated. That - plus a reboot - has done the trick.

I was worried by the description that said the “reinstall” was a ‘destructive process’. The Roon Community here is really helpful; the Roon Support bods less so. You guys should be on the payroll.

Glad the reinstall and reboot worked.

The Roon Community here is really helpful; the Roon Support bods less so.

Give them a break - the release of 1.8 has brought a flood of support calls, and it is a very small team at the moment. They are doing their best to catch up. If Community members can help out, it’s a win-win situation, IMO

I appreciate that the support team are swamped, and my complaints aren’t directed at them as individuals, but I don’t like the idea of the Roon community being used as a crutch by an organisation that certainly earns enough money to fund a proper support department. There are also questions to be asked about updates being released before they have been tested adequately and proven to be ready for market. This is the second time in a row that a Roon update has rendered my system unusable. Rant over.

There are also questions to be asked about updates being released before they have been tested adequately and proven to be ready for market.

Roon Labs do both alpha and beta testing - but I think it’s a fair assumption that the pool of testers is much smaller than the 250,000 Roon users - and some things will slip through; hence driving up the support requests…