I noticed that everytime I reboot my router, a new AirPlay instance of Hegel H390 with the same IP-address appears in the device list 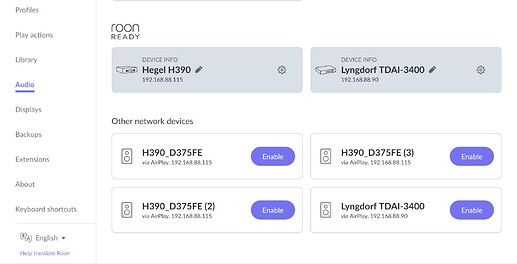 So I have to turn off my router, reset H390 and reboot my Roon Core to make it right

Actually I noticed this earlier with previous Hegel firmware and stable Roon 1.8
And there are a few topics regarding such issue:

Why is Roon listing my Hegel H120 multiple times under Other Network Devices? You will notice that they all have the same IP address and primary name. [roon] Appreciate some clarity on this. Thanks

Strange…. After upgrading to the ROON version of my Hegel, the H190 appears twice as an Airplay devices. I can play to both… How can I remove one of them (not disable, but simply remove). Both have the same IP address. In the picture it is H190_xxxx and Hegel Living [image]

So I have to turn off my router, reset H390 and reboot my Roon Core to make it right

Can you please try these actions, one at a time to see if one, in particular, resolves the issue (until the next time it happens)?

What is the model/manufacturer of your router and any other networking gear?

try these actions, one at a time

Actually I have to do at least two things: reset the Hegel and reboot the router. Exactly or almost at the same time.
Sometimes this enough and I don’t need to reboot the core.
Resetting the Hegel is essential. But it looks like after that, some residual information remains in the router and network.
Therefore, the exact algorithm of actions is as follows:

What is the model/manufacturer of your router

Thanks for that additional information. If you try to enable one of the duplicate Hegels, what happens? Do you hear sound when playing to any of the duplicates? Usually, this can be caused by multicast issues, do you by any chance have any MDNS reflectors apps on this network? Also, please see this article, it may be helpful: