I understand ios 11 is a requirement to get idevices as an endpoint, but does it need to be a requirement just to update the roon app.

I can’t upgrade any of the roon versions on my devices be none of them are on ios 11. I now have 3 idevices that are all on different versions of roon remote, and I can’t even get them to the newest version of roon before the ios 11 requirement. I don’t even care about getting idevices as a remote. Not happy about the current update of the app.

Any way to make it work again for older ios and make ios 11 required for the end point feature?

I updated to iOS 11 on my iPad, but I’m still using iOS 10 on my phone, and the older version of the remote works fine. What functionality are you missing?

One of my ipad’s doesn’t have the one button play feature, it still has the big play button screen that comes up. Very annoying that I can’t update it to the version just prior to the ios 11 requirement.

When you say you ‘can’t update’, what are the symptoms and what error message do you get?

Something tells me if I ever delete this version I won’t be able to reinstall any roon remote app without an iOS update. lovely.

Any way to make it work again for older ios and make ios 11 required for the end point feature?

Unfortunately, the iOS 11 requirement isn’t related to the audio output functionality. 1.4 included a number of interface changes and these required iOS 11.

Something tells me if I ever delete this version I won’t be able to reinstall any roon remote app without an iOS update. lovely.

Valid point, but normally a restore will do. But not if, as you say, have deleted the app.

I’m writing this as I expect you have an old iOS device.

Typical iOS behaviour is you can re-install the older version supported by your device. See App Store -> updates -> purchased-> not on this iPhone

I’m not updating my phone to 11. I delete Roon, I visit the above and: 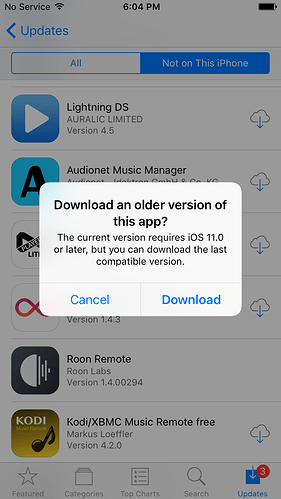 Nice, so there is hope.

The availability of these older versions though is, I believe, governed by Roon themselves so … for how long? Good question for @support I guess. How long can one expect 1.3 era remotes to be available/ backwards compatible?

Hence why I also posted this one.

I’ve as well others have noticed iPhones is quite good Roon endpoints, using the Lightning to USB camera kit. Unfortunately Roon requires iOS 11, so iPod Touch5 and other older iPhones can’t be used. Can we have a iOS Bridge app ? Or a setting in present app to only be a Bridge? I suppose the functionality is already there available, but if such an app would be made separately, could it then function on older devices ? The idea with a switch setting the phone as a pure endpoint is to be able…

May have to try this and see if I can possibly grab a newer version than what I have on a few of my older devices.

Well, for what it’s worth, I got version 1.300276 on all my devices, but found an annoying bug that will probably not be fixed without me going to a newer version on ios 11.

Seems that the "Add Nex"t button just plays the track immediately and the “Add to Queue” button works like the Add Next button should and adds the track to the next item in queue.