Could you provide a little bit more system information to help us help you?
Your equipment, your network etc.
As per the support template.

Also I know there was a recent firmware update from Auralic related to Roon problems.
Are you on the very latest Auralic and Roon versions?

Not jacking this post but helping out here. Firmware versions could be a bit outdated.

Hi everyone, I wanted to share an update from Auralic with you: Auralic Known Issues with Firmware Thank you all for your patience!

Hey @John_van_Beers thanks for reaching out about this. Looks like you’ve gotten some great feedback from others on this post (thanks everyone!). Auralic did recently release a firmware update (8.0) that has caused some issues with Roon. They are working to release an updated firmware to address these issues. We can still troubleshoot the issue you’re experiencing, such as the track stopping during playback, but first, we will need more information about your current setup.

Include your operating system and machine info (Model, CPU, RAM)

Tell us about the problem you’re having in as much detail as possible. Screenshots are always appreciated! Additionally, please let us know if this happens with Local, TIDAL, or Qobuz tracks.

Hi Ashley, @Gijs_van_Beers was helping me out about the specs I will ask him if he sees some more missing details as described by you. Thanks for the post.

Hi all, here is the update. If I missed any important details please let me know.

My apologies, @Gijs_van_Beers and @John_van_Beers, I wasn’t aware that this was the current set up information, my bad! Thank you for reposting that for me.

Do you experience any skipping of tracks with any other endpoint in Roon or is it just related to the Auralic Altair device? Are you able to test this out with any other device that you may have, such as playing to “System Output” on the Windows remote that you’re using?

Since the Auralic firmware is most up to date, it could be that this issue is pertaining to the firmware update issues that Auralic is working to fix. Can you confirm if this issue was brought on after updating to firmware version 8.0?

The NUC, and the Carbon are Windows systems:

The Carbon
Realtek - Toslink to a CambridgeAudio DACMagic, Sterro Tulp to a Yamaha C-45 and a M-45

The NUC
Realtek - Toslink to a Pioneer VSX-917V.

I will keep track if this problem occurs on the Windows systems. Because I can’t recall this at this point.
Update: multi hour test, no problems at all Tidal and one collection mixed.

What I can confirm is that we are running firmware 8.0 on the Auralic.

Thanks, @Gijs_van_Beers and @John_van_Beers! I appreciate you keeping me updated.

I was able to see that Auralic released the most recent firmware update (Version 8.1) and was hoping that you could update the Altair to this firmware version and test again to see if the issue persists?

The firmware has been updated, it seems that the problems have been resolved. 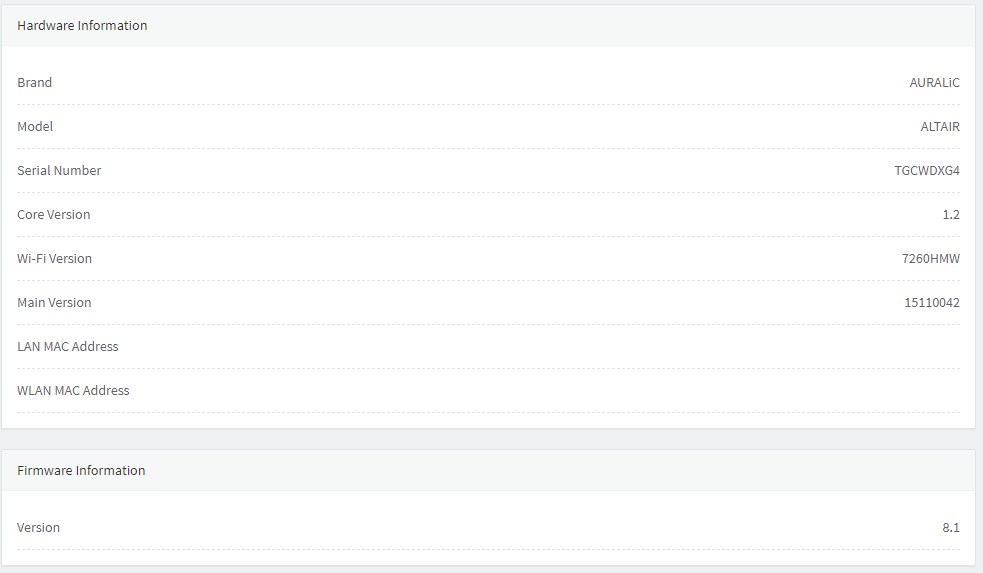 Thanks for confirming that for us! I’m happy to hear that helped!