I have had this problem several times: for no apparent reason, Roon rescans my entire library, which is stored on a Drobo which–I believe–has not lost its mount or otherwise disconnected.

this is a huge problem because I have a very large library that can take more than an hour to scan. During that time, my music isn’t available to me until scanned and even the scanned music is very hard to play because Roon is busy scanning.

Has anyone seen this issue?

Just a couple of quick questions, for more information. Is Roon on a Mac or PC? OS version? Is it connected directly like USB or eSTAT or via Ethernet? If Ethernet, is it a static IP? What is the file system, i.e SMB?

Roon is running on a Mac Mini running OSX 10.11.3. It is connected via Ethernet to the Drobo mounted as SMB via DHCP though I don’t think the IP address has changed at any time since I installed Roon.

In rescanning, Roon is filling my library with “duplicates.” Also, it is not preserving my changes in preferences to give, for instance, priority to the file’s Album Artist or Title over Roon’s data.

This rescan has taken over three hours and is still nowhere near complete. Yesterday, when the same thing happened, not only was the rescan a debilitating waste oof time and functionality, but the time it took to save the data into the library was multi-hour.

Well, being DHCP probably isn’t the issue if it is happening more than once. I would still verfiy to make sure though. But, as a standard practice I always give network resources a static IP to avoid any issues where the IP could get released and reissued, like printers, storage devices, etc.

However, the symptoms you’ve described sound as though Roon lost connection to the Drobo and when it reconnected it was seen as a totally new source, hence the duplicates. And as a new source, your previous preference changes would be reset to default.

I’m not a MAC guy, but it sounds like an issue that was happening a little bit ago. @mike or @brian might be able to shed more light on it. So I’m going to flag it for them to help out.

Thanks… for what it’s worth, I never have to have Roon re-find my library’s folder in Settings --> Storage.

Hey @Dan_Levy – thanks for the report here, and sorry for the trouble. We’re aware of similar reports from 2 or 3 other users, and we’re working on making this reproducible in house so we can resolve this for our next release.

It is connected via Ethernet to the Drobo mounted as SMB via DHCP though I don’t think the IP address has changed at any time since I installed Roon.

Can you post a screenshot of the Storage tab of Settings @Dan_Levy – I want to make sure we’re understanding exactly how you have your Drobo mounted in Roon. 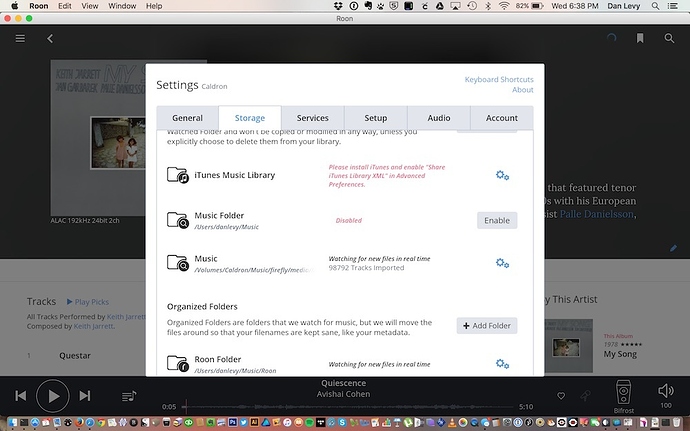 note that I am using a library on a Drobo. It may be worth noting that at this moment, my Library Maintenance screen says I have 157,000 files to clean up! Once I clean up those files (judging from past experience), and once the system says I’ve imported my library (seriously this is like the 7th time it’s done this), I would have to again reset the metadata preferences to prefer the files’ Album Artist and Title, and that would trigger another lengthy period of saving the new Roon library, and then this nasty cycle would start all over again.

Hey @Dan_Levy – can you fist confirm what version of Roon you’re running under Settings > About?

Then, can you try these steps and let me know if things are more stable for you?

Let me know if that’s unclear, or if you’ve already tried this, and we can dig a little deeper. Thanks!

Ok, @mike here’s the latest. I remounted my NAS per your instructions, and Roon scanned my library. That took 17.5 hours. But at the end, after all was scanned, the process did not stop. The spinning progress wheel at top-right kept spinning, even though it was clear that all tracks (there are 250,000) were scanned. It spun all night long and never completed.

I surely wasn’t going to quit and restart Roon just to see whether I could get that to stop, anticipating another 17.5 hour process. But I did do a command-all on the entire library so I could give priority to my files’ metadata (title, album artist, art) over Roon’s metadata. That process concluded fairly quickly but it took about two hours after that for the “Changes made to your library are being recorded into the database” process to conclude. (By the way, there really MUST be a way to assert preference for file metadata as the data is scanned rather than requiring users to make that preference each time new material is added. Serious bummer on an ongoing basis even if everything else was working well.)

Upon its conclusion, I added six new albums to my NAS’s watched folder. Uh oh. The scanning process just restarted. Now it says “of 502,000 tracks, 257,000 added.” In other words it is going to scan and add duplicates of everything to the library and another 17.5 hours down the drain, PLUS the time it takes to effect the clean up duplicates process after that.

So…that is the current status.

Given the time involved, I think you should create a smaller test directory (100 albums or so) to verify that things are working. I’d do that first directly on the Mac Mini completely removing the Dobro from the equation; if that went smooth, then I’d setup a different smaller test directory on the Dobro (again 100 albums or so) and see what happens. Once the basics are working fine, then, I’d point Roon at the whole enchilada.

Thanks for the update Dan. I just sent you some instructions for sending us some logs so we can take a deeper look at what’s going on here.

We’re aware of some issues that can cause Roon to mistake NAS drive connection issues for deletes and imports. If Roon gets confused, it can mistakenly think you actually have two copies of the same media, which can cause this:

not preserving my changes in preferences to give, for instance, priority to the file’s Album Artist or Title over Roon’s data

We’re working on some fixes for our upcoming 1.2 release that should ensure we don’t mistake these connection issues for deletes or imports, and getting some logs should help us confirm whether you’re experiencing the same issue.

Once we have the logs, we’ll follow up here. Sorry again for the trouble!

I am so bowled over by what is brilliant about Roon that I will be almost infinitely patient as we work through these issues!

A post was split to a new topic: Roon stuck scanning files