Roon starts messing up the library

this starts making roon unusable. I have reported this problem in a former thread. Now, after some days roon starts to mess up several artists/albums.

I have 2 albums from an artist called Bryan Adams. All metadata already corrected to get them in proper shape (for me). Now, after some days, the artist Bryan Adams is gone and replaced by a guy called B. Adams. Different picture and in both albums the former used Bryan Adams got replaced by B. Adams (without me touching them (also not played them). My former tag Bryan Adams is still there but not linked anymore.

What I cannot show in my attached screenshot is the case that first only one album was listed under the new tag and the other one didn’t show up at all. Then, after searching for Bryan Adams, the guy B. Adams showed up and after that, the second album was also listed. 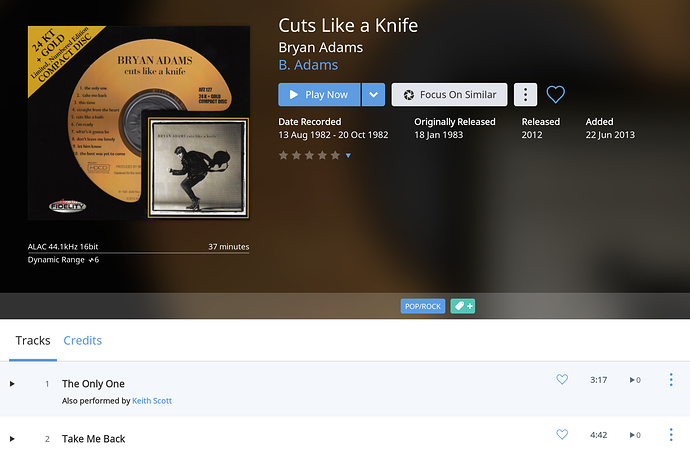 Furthermore, several artist images I already added to some of the artists where it was missing are gone.

How can I stop roon from touching anything that I edited?

Choose file metadata for the album

That disables also the advantage what makes up roon, so all edits will be overwritten with the file information and all added stuff incl. allmusic comments will be gone, or not?

I just do not want roon to mess up my stuff after investing a lot of time into maintaining the information.

Roon does not touch your files that are in your folders on your hard drive apart from the ability to delete files. There are plenty of warnings here.
You can edit everything else in Roon without touching your files, just ensure to back up the Roon data base regularly. 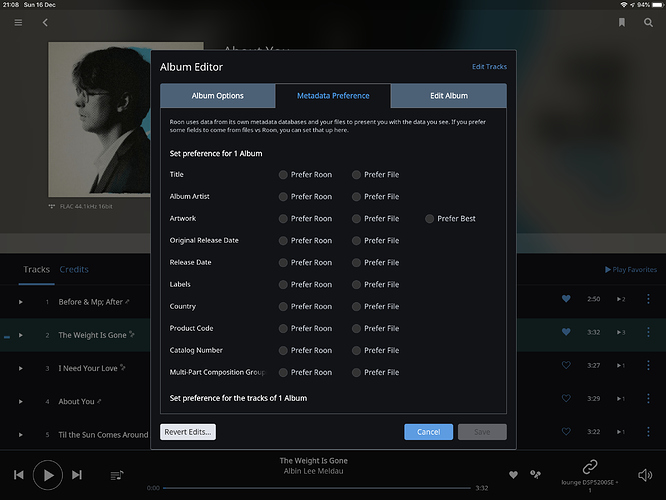 Roon does not touch your files that are in your folders on your hard drive apart from the ability to delete files.

And I don’t understand why the option to delete files is even there. IMO it shouldn’t be.

You can edit everything else in Roon without touching your files, just ensure to back up the Roon data base regularly.

Yes, I know all this. But, this would still not solve the described behavior. Roon seemed to have updated the artist from “Bryan” to “B.” Adams. The former used “Bryan” is not in the database anymore and therefore - wether from file metadata or roon metadata - the link to the artist will be gone. Furthermore, all associated roles the artist plays (producer, composer, etc.) will all be linked to “B.” Adams instead of the “Bryan”.

To me there is only one solution which allows the user to “fix” a record (artist, album or tracks) once edited and re-open/close it by using the interface. In those cases roon would not overwrite anything (it might add another Mr. Adams, but not rename the already edited one).

For now I have renamed the “B. Adams” back to “Bryan Adams”. But, I do not want to spend hours in the metadata to find out that something essential has changed. Having around 1000 artists and a hell amount of albums with tracks, this is not helpful.

We need to see what support have to say then

Yes, hope they come back to this one…

And others say that the safety warnings are too intrusive. Roon can’t win here …

Ralf, I’ve moved this issue into the Metadata issues forum. I’ve noticed that my Roon has also mysteriously renamed the artist Bryan Adams to B. Adams. It looks like something has happened in the metadata in Roon’s online database. Flagging @joel to ask him to comment on this.

Thanks Geoff, yes, but why does this affect MY data? Is it magically changing such essential things without notification/ask?

Also, I am still looking why lots of my images have simply vanished from the database (hope it does not do that on albums, not possible to follow up on that amount). It took me some good amount of time to find images from some of the artists (especially the older not well known ones, like Madala Kuene).

Everytime I go into the artist list, something new ridiculous is popping up.

It’s not affecting your metadata, what you are seeing is Roon’s view of your collection expressed through its metadata model.

I think you are also saying that a lot of your artist images are not being shown, even though you have image files in your collection. That is quite likely. Roon does not currently scan local collections for artist images (mainly I think because, unlike for album images, there’s no de facto way of defining what is an artist image in files and folders). You can tell Roon to use your own artist image file for each artist where Roon does not have an image, but it is a manual process, I’m afraid.

This is exactly what I did. Missing image was applied either through file upload or using the “from URL”. In both cases everything was properly shown in the past. Now, since last week, several of the images are gone when looking at the artist browser. Opening such an artist also does not bring back that image. Only way to get this is by applying the image again.

@Ralf_Karpa Roon provides metadata as a service and metadata changes all the time as a consequence of raw metadata provided to us and changes in our backend processing.

Sometimes genuine improvements to the overall metadata have undesired and unavoidable side effects — Bryan Adams being renamed is one of them (the root cause of which is Bryan Adams’ lawyers instructing removal of his metadata from AMG/Rovi/TiVo’s database) — but this is a rare high profile case, and we will fix it as soon as we can.

With regard to artist images disappearing, this is probably because we merged some artist ID duplicates (which is an improvement), but unfortunately, the ID against which you attached the image no longer exists in your library.

I apologize for any inconvenience caused, but we have to make changes for the long-term betterment of the product. We appreciate this kind of feedback and we will endeavour to resolve metadata issues as they arise.

@joel, thanks for the explanation, appreciated

ok, understood, this should not happen often, however, it does make me nervous when I invest a lot of time to get my library in shape and always have to be unsure what happens next, especially with the second part of the reply

With regard to artist images disappearing, this is probably because we merged some artist ID duplicates

yes, there are lots of duplicates, in the database, all of which I am trying to get rid of by either merging or replacing in the editor. But this seems to be a waste of effort as it could be replaced by the backend overwriting whatever I did?

yes, there are lots of duplicates, in the database, all of which I am trying to get rid of by either merging or replacing in the editor. But this seems to be a waste of effort as it could be replaced by the backend overwriting whatever I did?

I would hold off for another week and have a look then.

ok, understood, looks like roon team is currently doing a bigger consolidation of the backend database.

Side-question… When I added an image to the database, will that space be freed as well when the artists are merged or is there a “dead” image somewhere in the database?

I don’t know the answer to that one; the Roon Core is quite complex. Will try and find out though.

but this is a rare high profile case, and we will fix it as soon as we can.

please do so as soon as possible.