Roon/Tidal dropouts. Is this an unsolvable problem? [Solved]

I just subscribed to Tidal yesterday. I have had Roon for a year. I love Roon on it’s own. Put the two together and it’s a train wreck. I can use Tidal through Google Chrome no problem. The Tidal App. is great. I’d love to use the two together but to have every song stop and skip to the next one is not my idea of fun. It looks like this problem has been going on for years to no solution. I’d love some help but my computer literacy is low. I’ve read some of the answers and they are like reading Greek to me. Do I just accept my fate? We have normal wifi. We stream movies etc. What’s the problem?

You’ve a better chance of repsone if you call @support.

The first question they will ask is for details of your system so you may as well provide some more details to speed things up.
So what do you run Roon on and how is it connected to your speakers?
What router are you using?
Are you using wired or wireless?

The more details the speedier the solution.

Thank you John. I have a Macbook Pro 2.5 GHz Intel Core i5 4GB memory. I plug it by USB into a Devialet 400. It drops out when i listen with headphones also though. Wireless is the way it’s running. I have a Frontier netgear router. I’m not computer savvy so that is all I know. I don’t seem to have the problem with Tidal alone. Roon is fine alone also.

Is this Netgear 7550 the router you are referring to ?

Dropouts are not usually an insoluble problem, the problem is isolating which of many sufficient causes are responsible for the dropouts this time.

Are you able to connect your MacBook to the router by wired Ethernet to see if dropouts continue ? If so, then I would suspect that a different DNS server may assist, if not, then the WiFi link may warrant further investigation.

The @support devs will be along shortly to check in and possibly request logs to check how the problem is occurring.

B90 7550 are some of the numbers. I guess that is the one. Here is my problem, I don’t even know what DNS server is. When the cavalry arrives they will be speaking a foreign language. Keep in mind that I have been listening to Tidal uninterrupted for a couple hours without Roon. It is only when Roon is included that the problems start.

Now my Tidal is dropping out too. I am willing to get another router or whatever needs to be done but I’ve seen people on here say that it hasn’t helped.

Where are you geographically Mike ?

I am in Australia and there were periods last year when Tidal/Roon became unusable due to dropouts. In the end that seems to have been due to problems with Tidal’s service partner in Asia, and was fixed. I also changed DNS server to the public Google servers at that time so cannot say whether that played a part in fixing my problems, but it has helped others.

It is interesting that the Tidal app is also experiencing an issue (albeit not to the same extent), but the test that will be most helpful in the short term is replacing the WiFi link with Ethernet directly to the router and seeing if the Roon/Tidal dropouts continue.

FYI a DNS or Domain Name Server converts the words humans use into the numbers that the Internet uses. Calls to the DNS can take more or less time and that time can affect playback of streaming music. Most people will be using the DNS operated by their ISP but there are now a number of public DNS operated by Google and others, which can have faster response times.

Let’s not worry about DNS however until we work out whether the problem is inside your network or before it. That is what the test with Ethernet should do.

Unfortunately my wife says we don’t have an ethernet cable. I will pick one up tomorrow. I am in Stockbridge Mi. USA. I appreciate you checking in and I believe I saw your previous thread and it was the one that seemed like Greek to me. LOL. Some of the things discussed I have no clue about.

Hold down the OPTION key on the keyboard and click on the wifi icon in the top right of the screen area.

Here is a one I did just now.

If your rate on the speedtest is not great then try Tidal in non HIFI mode and see if that helps…if your mac is old you might not have great wifi speed, or if your internet connection is slow then even worse. I have a very fast internet connection and my wifi is always the bottleneck if there is one…but I also have good wifi speeds when using 802.11ac where I get 700Mbps+ 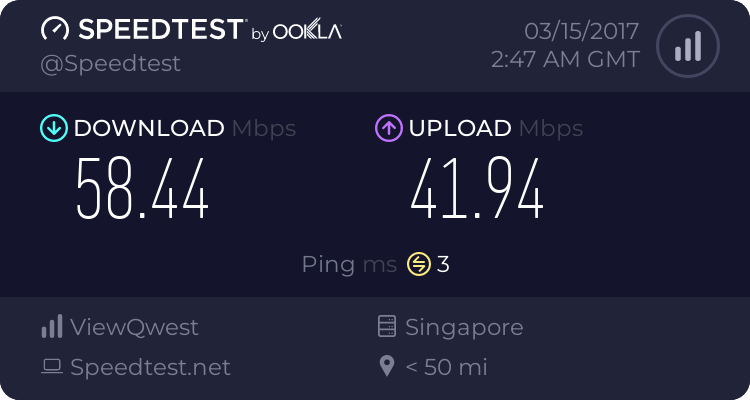 Keep in mind I have no idea what the numbers mean but I could see that its really bad.

My Speediest shows me in the bottom ten percent. My Macbook is a mid 2012. Is that considered old?

It’s unlikely that your MacBook is causing the low download speed, but it would be worth running the test again from another computer if you have one available.

I would start with your ISP. Let them know the speed test results and ask if there are any known faults or anything particular to your connection that might be contributing to those results.

I think Andy beat me to it…you are not likely to be going to get much in the way of streaming over that internet connection.

I would perhaps try turning off the router/modem setup and retry the speed test.

Another thing to ask is what speed internet are you paying for…that speed is almost dial-up territory. Even a 3G phone connection would probably be fatster than whatt you are getting there.

You are I assume not running a VPN? a ping of 98ms is pretty long or maybe the server it tested to is not near your location?

I have no idea what a VPN is? It listed server location as East Lansing Mi. which is 45 minutes away. It listed Owosso on another test which is eaually as far. I.m not sure what we are paying for but I’ll be sure to check. We are in a rural area so we are restricted with choices.

Thank you. I will try that and get back to you. I really appreciate the guidance.

I have called Frontier and I currently have the 2nd to lowest package they offer. if I get their top of the line speed will this solve my problem?

Did they quote you a speed for your specific location ? Sometimes rural connections play by their own rules. Streaming audio doesn’t require a lot of bandwidth compared to, say, Netflix so any half-decent plan should suffice.

My wife’s name is on the account so they wouldn’t tell me specifics. We have no problem streaming Netflix so maybe I’m barking up the wrong tree.

Incidentally I am using Roon/Tidal right now. Bottom line if I can’t get it to work at least 90 percent of the time it won’t be worth the aggravation. Lol. I do have a wife and 2 kids that might be using the internet at the same time. How much of a factor is that?