The problem is for the Album is that the Roon data duplicate 2 songs, in what is clearly the correctly identified album. 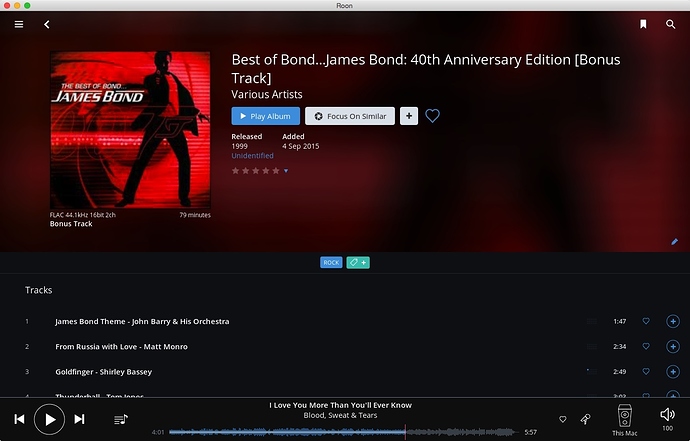 When it is identified correctly, and it does, there are two Roon Database tracks that are duplicated. Everything else looks just fine. 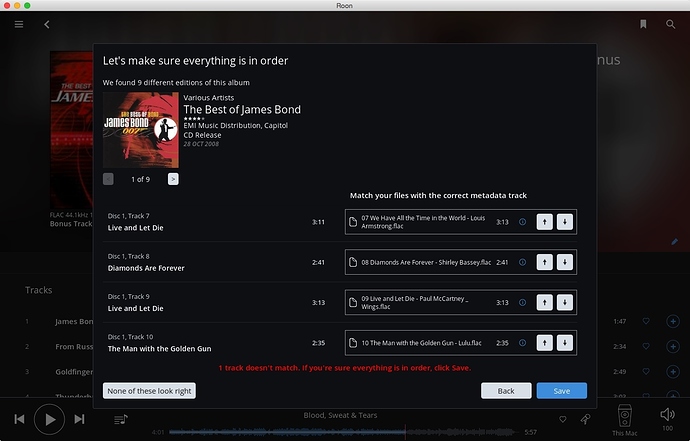 So about your can see Live and Let Die appears twice. 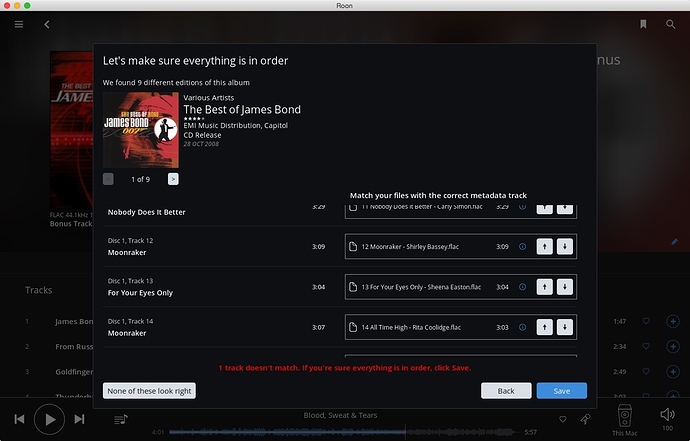 I can’t seems to edit the Roon Data names for the tracks.

Hey Brian, that does seem like a bug in that versions meta-data. Did you try looking at a different version and seeing if it was a better match? In your pics, if you look under the album pic you’ll see a “1 of 9” version selector. Try going to the other versions and see if one of others matches your music better.

Yes, I’ve looked at all the different Bond albums, and this is the correct album. I think I would call it “input error” on the part of the metadata provider. They probably had a human inputting data, and for some reason put two songs in twice, but then who knows.

I actually didn’t even realize the “1 of 9” so I’ll look closely at that!

I looked and there are 9 different versions with the same album cover. I found a better fit for the data, but it too has an error. One song appears twice: “The World is not Enough”. It’s better than 2 songs appearing twice! 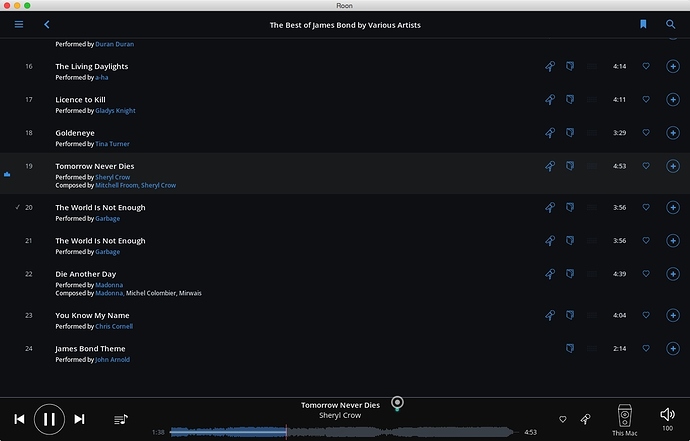 Yep, if there is a version which fits better that is what I choose, so even though my album might be a digital download, I’ll choose the CD version if it fits better. But, I manually tag my albums with source origin in the “Version” section, so I’m not overly concerned if the “version” I chose to populate the database is the same as the one I really have.

I can’t seems to edit the Roon Data names for the tracks.

Hey @BLH – I see some errors in this album’s metadata, so I’m moving this topic. @jeremiah and I are going to discuss, but for now, you should be able to use the track titles from your file tags by following the instructions here.

Do you guys wants us to continue pointing these out to you?

Absolutely. I’ve opened a ticket for this in our bug tracker, so we’ll get this fixed soon. Definitely keep them coming.

I have had a similar issue with various cds tracks appearing twice - Ive gone and fixed the tracks, by ticking the additional track boxes, removed the addional tracks, created new album with fewer tracks hopefully, only to find the new album has 1-1 with two versions of the track relisted.

Can you tell where I’m going wrong with the above process?

But why are duplicate tracks appearing in the first place?

Thanks in anticipation.
Regards, Andrew.

This series of youtube helps for roon sorted me out…a great help!