Roon Trial does not play DSD to USB dac

I just switched to Roon trial and now I can no longer access the file in DSD64, DSD128 and DSD256. Before I was on JRiver which encapsulated in DOP and 24/96 to the Ayre QB9 USB dac which is limited to 96 Khz.

I found no functions on this subject in Roon.

Is this a limitation during the trial period?

If anyone knows thank you

There is no limitation of Roon in the trial period, so something else must be going on.

Can you say something more about the issue? When you say that you can no longer access these files - how are you trying to access them?

Also, what are your settings in Roon for your dac? Go to Settings > Audio and click on the gearwheel icon of the entry for your Ayre dac.

Before I was on JRiver which encapsulated in DOP and 24/96 to the Ayre QB9 USB dac which is limited to 96 Khz.

If your QB9 really has a limitation of 96kHz, you could not possibly have sent DSD signal to it because DoP encapsulation is done at 176.4kHz.

There are several incarnations of QB-9. The original 2009 version did not support DSD. The revised version of it known as QB-9 DSD does.

If you’re using the 2009 version, you can use Roon DSP Engine to downsample the DSD files to 96kHz or 88.2kHz for playback.

Is this a limitation during the trial period?

So this sounds(!) like a settings issue. Can you post a screenshot of your Roon settings screen for the PC > Ayre connection?

What option have you chosen for the DSD playback strategy? Here are your possible options (example screenshot of one of my devices): 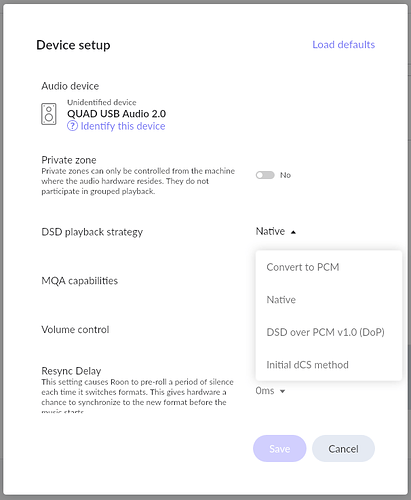 You need to manually set Roon DSP Engine to convert them to 88.2kHz (if it plays normally) or 96kHz.

Merci Geoff
You are reason! thanks

…Device not identified… in Roon
Just the name of the Ayre QB9 that appears but the QB9 model is not offered in the models on Roon, so nothing to modify.
So I went to the audio DSP settings where there is question of the DSD, which was not activated and I was able to make personalized settings. Great.
Thanks!!!