Roon we need to talk (about genres)

Let’s not go there

Now that’s a deep concept. I won’t be in the mood to “go there” until I’ve had a few beers this evening

If said individual is in a striking minority, perhaps it would benefit him to simply conform, so that he could communicate better with others.

Nope. I like being in a minority and perceiving things differently. I like people having opinions but we seem to be wanting to impose a version of opinion onto people as “fact”. I don’t think it should ever be a goal of Roon - or any other product out there - to thrust a version on people. Sure it would be nice to load meta data from other places. Maybe we find one that more closely approximates our fact. Sorry, opinion. But maybe we want to fly against the grain because we just perceive things differently.

Actually @Peter_Davies1is incorrect, that only shows you the way tags imported are translated to what genres in Roon. On that same screen, if you click on one of the little pencil icons (to reassign a genre) you’ll get the genre hierarchy. But as someone else said, it’s online at Allmusic

Opinions help define us as individuals.
But, if we want to communicate efficiently with eaxh other we should agree on language and terms. That way we can ask “Suggest me music of the genre X” and actually get the expected result.

Actually, i do not dislike the fact that rock and pop are grouped under big parent genre Rock/Pop. I mean, in my previous Logitech Media Server library, i used to have 3 big libraries: Classical, Jazz and Rock/Pop. It makes sense to me.
In general, i find it difficult to say “this is rock” or “this is pop”. But i’m not a genre classification maniac…

Nevertheless, there are albums/artists that i feel like more Pop (Madonna? Early Beatles?) and album/artists that i feel more rock (Springsteen?)…
More than that, i think that in the big family of Rock/Pop, the various sub-genres are more “rock” or more “pop”…

So, in general, the roon/allmusic logic works for me. Except that in roon, under Pop/Rock, there is a Pop subgenre, but not a Rock Subgenre. This doesn’t make much sense. Actually, i have a Rock Tag in my files…, so in my library settings i said that it’s a Pop/Rock subgenre. I could define all other roon “Rock” subgenres to be… subgenres of my Rock, and it would be ok. I guess.

On the other hand, I agree that… all various subgenres (of Rock/Pop, but also of Jazz and Classical) are not very satisfying (for me… “alternative” , “indie”, “adult”… do not make much sense…) and i would like a simplified hierarchy.

So, i agree that the possibility to edit in a better and easier way the library genres hierarchy would be very very appreciated.

in my opinion… regional identification should not be a genre at all. the overall genre hierarchy would be simplified (see discogs).

then, there could be an additional “regional filter” if you want to select a particular genre coming from a particular region/country. in a way, it would be as if every genre had a regional sub-genre.

there are also specific genres that are strictly regional, in the sense that they are present only in a specific country/region, and cannot be seen as regional subgenres (i don’t know, flamenco? mongolian throat singing?). i would put all these under a “world music” parent.
i think this is the logic i meet in general in music stores… and it works.

Is any body else having the problem that Roon won’t allow you to choose genres?

For example, The Beatles are marked as “Pop/Rock”. 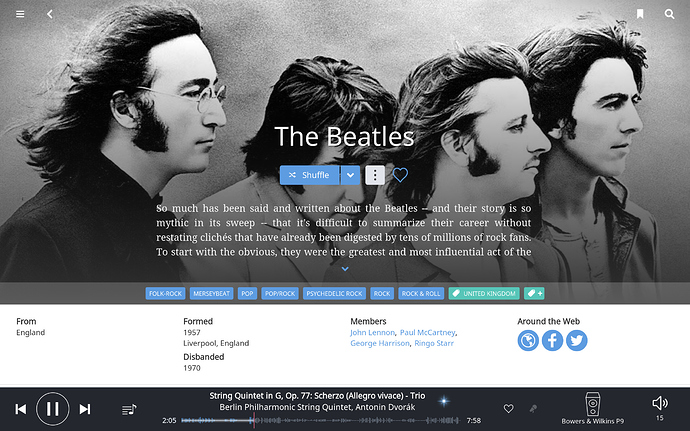 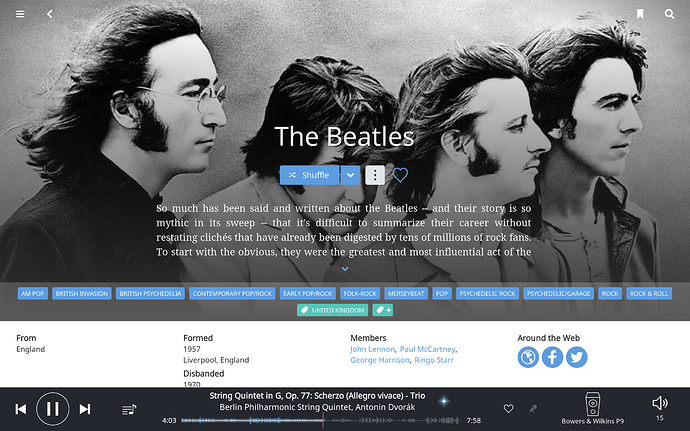 There’s another point, though, that i really dislike: international music. i mean, it seems that what is not English-american… is international, and i think this is quite “closed-minded”

Serious answer: you are right, of course. I nominate you for the head of the Genre Renaming Advisory Committee. Good luck on achieving consensus.

If I were Roon, I’d look upon Genre programming as a monumental time suck. Seems like “least worst” solutions are all that are available IMO.

no no, please!
actually, i’m not a genre maniac.
in fact, while in general my files are quite well tagged, i can’t say the same for genre tags.

so, at the end, i’ve chosen to use roon genre hierarchy, and to map my tags onto that. it is, in any case, just a way to group music, for exploring.

there are obviously some genre roles that i don’t subscribe… but you can more or less correct them.

in any case, i think that it’s really a pity that roon, a product which aims to be… the new (and best) thing about digital music… is so closed minded on the english/american point of view…

… is so closed minded on the english/american point of view…

I really do concur! But at least they didn’t label it the “Non-American” genre.

If I were Roon, I’d look upon Genre programming as a monumental time suck.

I do not know why, but Roon seems to be glued to its concept and implementation of Genre.
The lack of participation on this topic and the lack of and change in the software suggests that it is a very low priority item: they have checked the check-list item while the seem focused on deep technical aspects to broaden the product support base.
Meanwhile all the reviewers rave about Roon being the best-ever music library management software and so it is from a style point of view and the RAAT underpinnings. I still find myself reaching for JRiver to experience my library unpolluted by things I do not want.

Let’s hold judgment until the next major release. I agree there a quite a few shortfalls in library management and it includes genres. The Roon team has said the next release other than bug fixes will be a substantial shift, so let’s see what that brings.

Genres is essentially useless for me in Roon and I have offered my suggestions/comments occasionally for years. Nothing. I have 50,000+ tracks that have been tagged individually for genre - by track, not by album. Some albums have tracks fitting in to 3 or more genre categories. So the Roon system will essentially apply Genre by album such that if I shuffle a genre (Jazz? Reggae? whatever) songs from completely different genres regularly make it into the mix. Bob Dylan folk tune right next to Guns N Roses Welcome to the Jungle in the same mix? Useless…I seriously get the feeling that Roon is more focused on and knowledgeable about software and technology than serious music listening, by hard core music listeners who have spent years and years refining their music collection. Roon is good, I like it, but I really resent the fact that despite many users asking for “genre by track” genre and editing ability, it has done nothing. And I stopped listening to genres on my music collection some 2 years ago because it is so useless.

Better Genre editing would be great. HOWEVER, if Roon would simply recognize custom file-embedded metadata and allow it to be mapped to Roon Tags, this would enable the functionality you desire. You could (outside of Roon - i.e. using a good library manager like Foobar or editor like DBPowerAmp) map track genres to custom tags, and then import the custom tags into Roon Tags, then play your track Genres using Roon Tags.

I agree, Roon’s added UI functions feels stagnant. I understand it’s a lot faster and easier to bring on new hardware compatibility and this will help expand Roon’s user base. But at some point Roon needs to “close the loop” on completing some of the half-done UI features for the true curators (example Boolean logic for tags and genres).

Roon seems instead to want to go for the mainstream, but I am not really sure there is a mainstream to get.

I expect some of that will be coming with the next release, unless that is entirely focused on mobile usage (which I don’t care much about, but I understand many do).

That’s my main frustration with Roon as well.

Roon seems to think that Black Metal bands fall into the Pop/Rock category. Not quite! I’m sick of having to change it all the time.

Roon seems to think that Black Metal bands fall into the Pop/Rock category.

I have the same complain about Pop/Rock, in general and not just for Metal.