Searching for Little Feat, select album Time Loves A Hero, but Tidal tracklist is not listed/found , only A single hardisk track of Time loves a hero is displayed . Other songs I can find on Tidal but it seem that Roon is stuck to list only hard disk tracks, if I have then. I want all tracks to be found and listed , both Tidal and hard disk

Seems like I have to look to the right and choose versions, very unconvenient and confusing 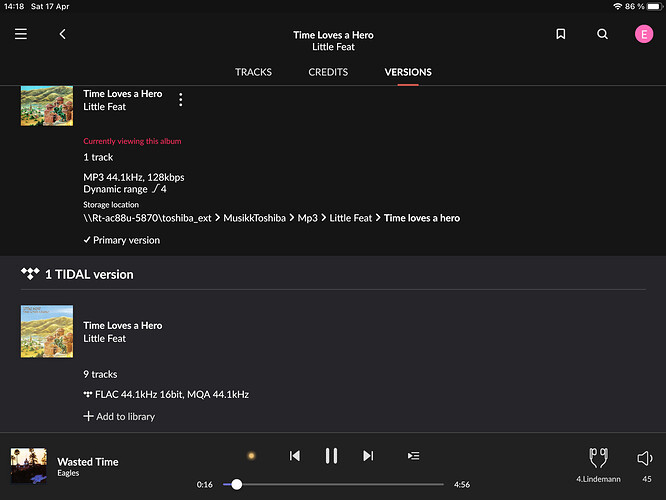 Thanks for bringing up this feature in Roon and for your patience while we got the chance to reply. I’m sorry it took us this long…

The behavior you’re describing is the expected one: duplicate albums will be grouped under the Versions tab. You can make primary the version you prefer, meaning Roon will play by default the version you set as primary.

However, if you don’t like this, you can always disable it in Settings → General → Show Hidden Tracks And Albums

I hope that works for you

I cannot make it work. no dots,choice or selection is visibe to make Tidal track/albumt primary 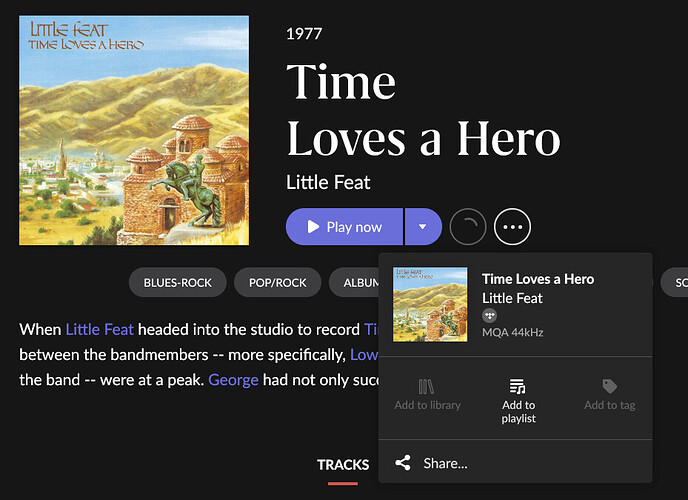 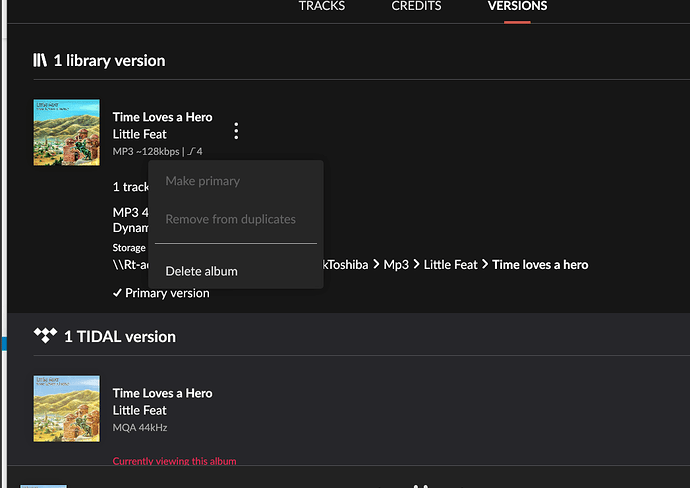 That’s because you are viewing the Tidal version IN Tidal - the “Versions” page aggregates all known versions of an album across both your own library and available in streaming services.

The page is even telling you that you have one version of the album in your library, and that is the MP3 track.

And here’s an example from my own library. I have a local downloaded version of this album. The Versions page is telling me that I have one (local) version in my library, and there is also a version available in Qobuz. 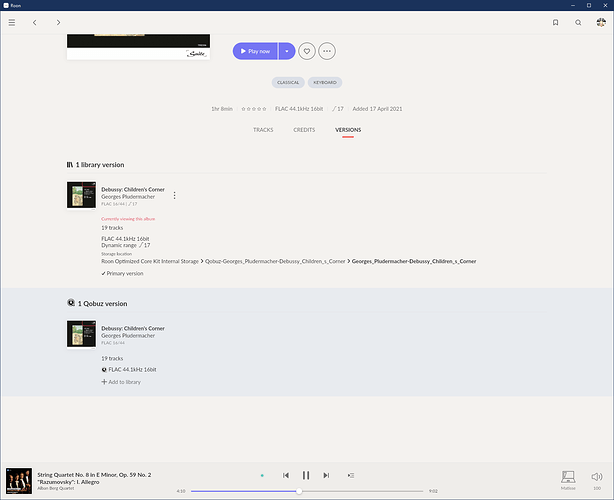 I can click on the “Add to library” link to add the Qobuz version to my library as well. Having done that, I now have two versions of the album in my library, and I can also now choose to make either one the Primary version… 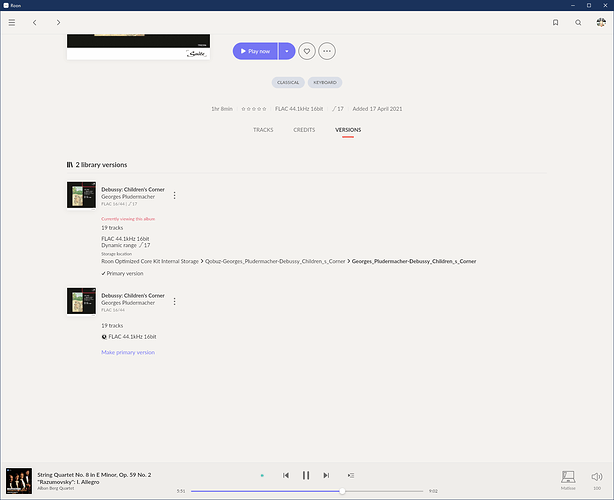 I find the Roon navigation very confusing. Now I cannot get back to the page where ican see versions…
Searcing for Time lovea A hero now see this, 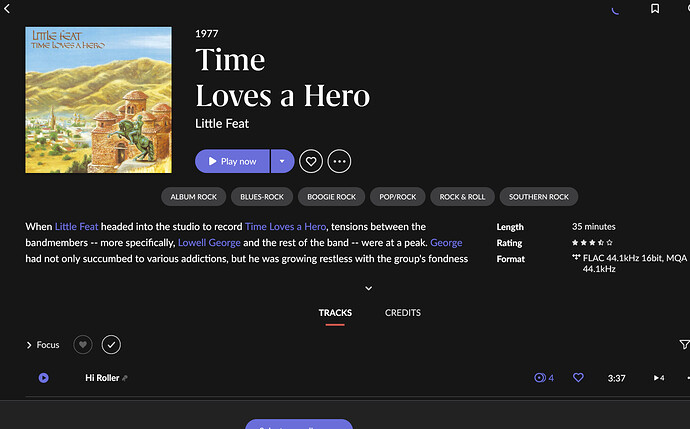 Both are in my "Library"whaterver library means, 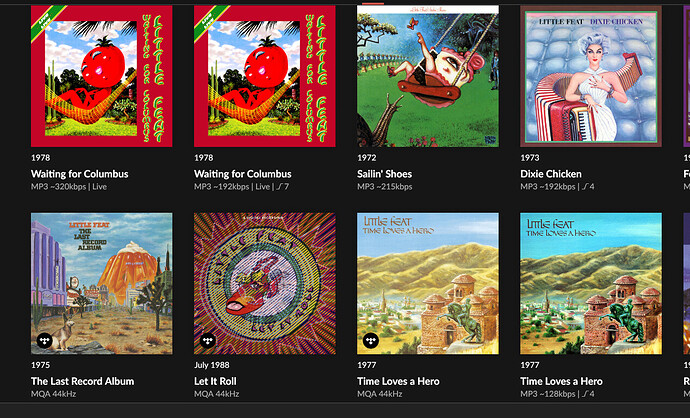 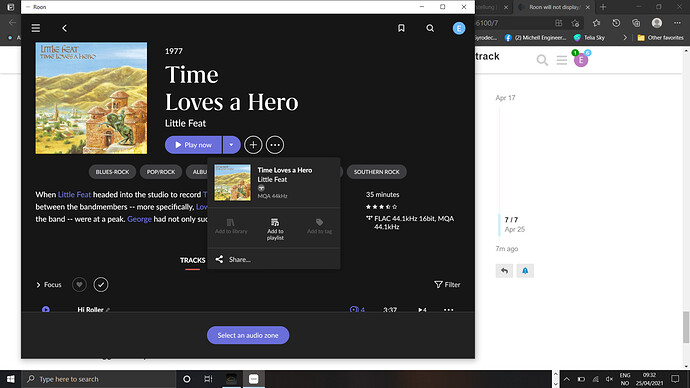 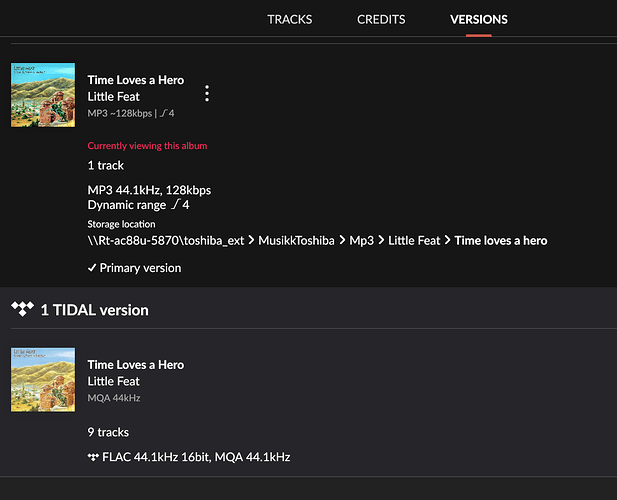 Roon is not recognising that these two albums of Little Feat are versions of the same album, but treating them as different albums - so there is no Versions tab displayed.

It’s because in your screenshot your local version is just 1 MP3 track - whereas the actual album has 9 tracks. 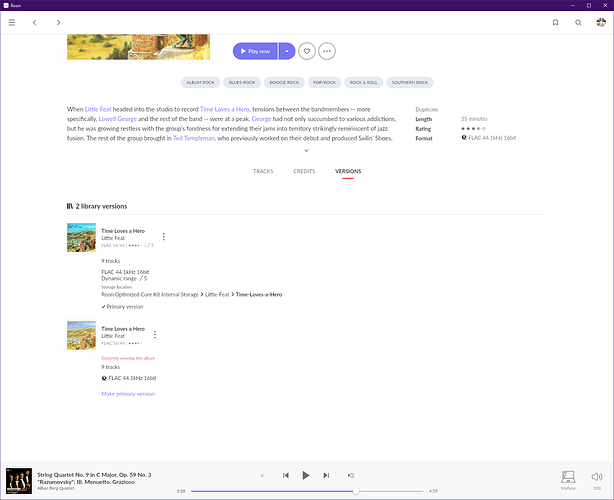