I built a Roon Server on x86 based board, but roon server get oom killed every few hours.

Hardware specs: ( Intel UP Squared board) 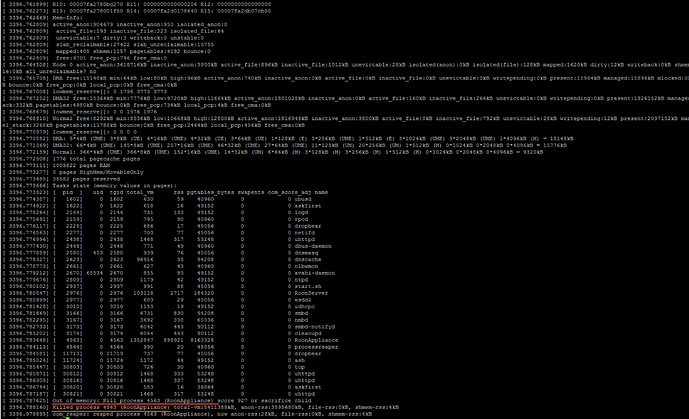 Your core seems to be heavily underpowered.

Surely you don’t have to believe my analysis. You can easily run your own tests to verify. You may start with feeding around 1+k tracks or less to Roon and see if the system runs stable.

I tested this hardware on my another environment with more than 20+k tracks 6TB music files, stable for running more than 2 weeks, average memory usage is 1.3GB.
eMMC is pretty enough for my setup, OS/libs/softs get about 100MB disk space, as you can see from the last screenshot. (/cache dir for roon database, 28.6GB)

Only in this environment get crashed, hard to figure out what the root cause is. Maybe some music files(DSD) ?

I tested this hardware on my another environment with more than 2+k tracks 6TB music files, stable for running more than 2 weeks, average memory usage is 1.3GB.

2+k tracks is roughly a third of the 6+k tracks in this environment so 1.3GB times 3 memory usage, assuming memory usage growth is somewhat linear to tracks count growth, leads to the memory usage regions where the process gets killed.
But I’m not an expert when it comes to Roon memory usage estimation. I also don’t have your hardware/software environment at hand to test. So I don’t know what can be expected in your environment.

Is Roon still analysing the library in the background? I’ve seen somewhat similar reports in the past were the cause was bad/problematic files.

If you split up your library in parts and point Roon at one part only at a time, you may be able to deduce the part of the library that contains the problematic files if this is what gives you trouble.

wow, Never thought about this, very useful advice , i’ll try it ASAP. Thanks very much.