Apologies if this has already been mentioned, but with the latest firmware update the ExaSound PlayPoint is a Roonready device and works very well and conveniently in this role. (I write as an ExaSound PlayPoint and e22 DAC owner with no other vested interest).

The 1.2 Roon release has a few improvements for this device, like making fractional volume numbers display correctly, and showing the branding properly, including identification of the DAC: 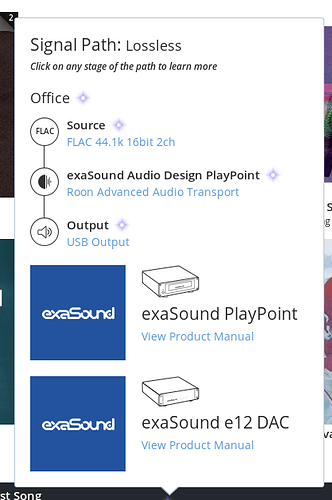 Thanks - that’s good to see. And even more reason to be excited about the release of 1.2…

The volume synchronization thing I mentioned is a big one–USB Audio 2.0 is not capable of implementing that feature–with this product the front panel of the device + Roon show the same volume number, and the volume can be adjusted from either location.

One of exaSound’s distinguishing features is their custom drivers + protocol for speaking to the device. It does use a USB cable, but because they’ve invented their own communications protocol, they can circumvent the usual limitations associated with USB Audio. This was no small effort on their part.

Ultimately, while bridges are necessary, there are more exciting product and user experience opportunities in a world that doesn’t have the USB Audio 2.0 standard shunted in between the software and the DAC.

There are plenty of DACs out there that can play the same set of formats (up to PCM384/DSD256) on Linux these days, so you could certainly make a bridge play the same files.