Interesting, although characters shouldn’t be missing ‘just’ because of that. Normally I don’t have that many apps running. However, I’ll keep an eye open for that.

Yes - I’ve been thinking about this today and don’t know if any Apple users have had this problem with their iPhones and iPads.

Any solution in the works? My Pixel C is having the same problem … annoying… 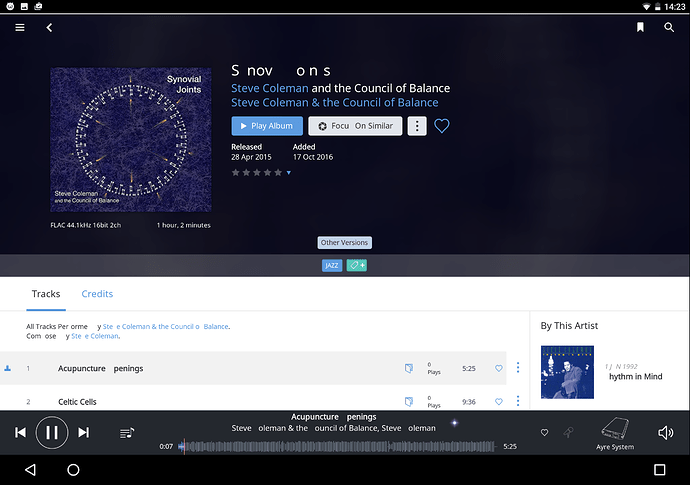 By any chance do you have your fonts set to anything other than the default setting. I’ve seen this happen when the default font size has been changed, either larger or smaller.

Hi @Rugby,
No, I haven’t touched the fonts, they’re still on default setting.

If the Roon app is in the background for some time, characters start disappearing. It doesn’t stop with that, as this screenshot shows. Except for more characters disappearing with time, other parts of the screen disappear or just the opposite, they stay in place, while others are placed on top of them and the whole screen is a jumble… In this case on my Pixel C… 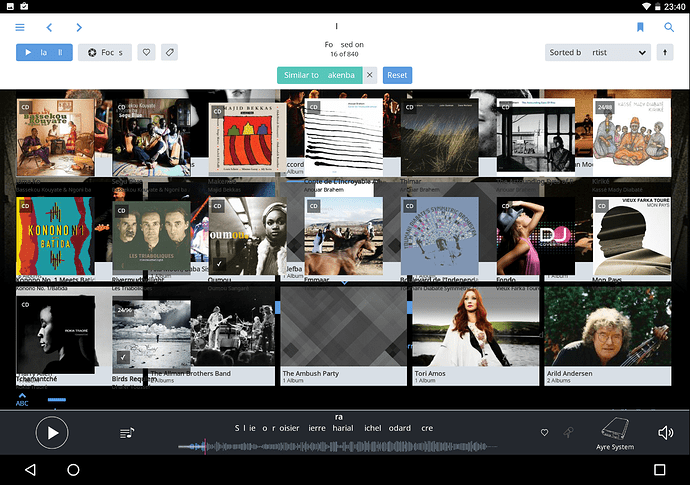 My Pixel C has this kind of issues as well.

Some time back I had a strange flickering screen, I was able to grab a screenshot: 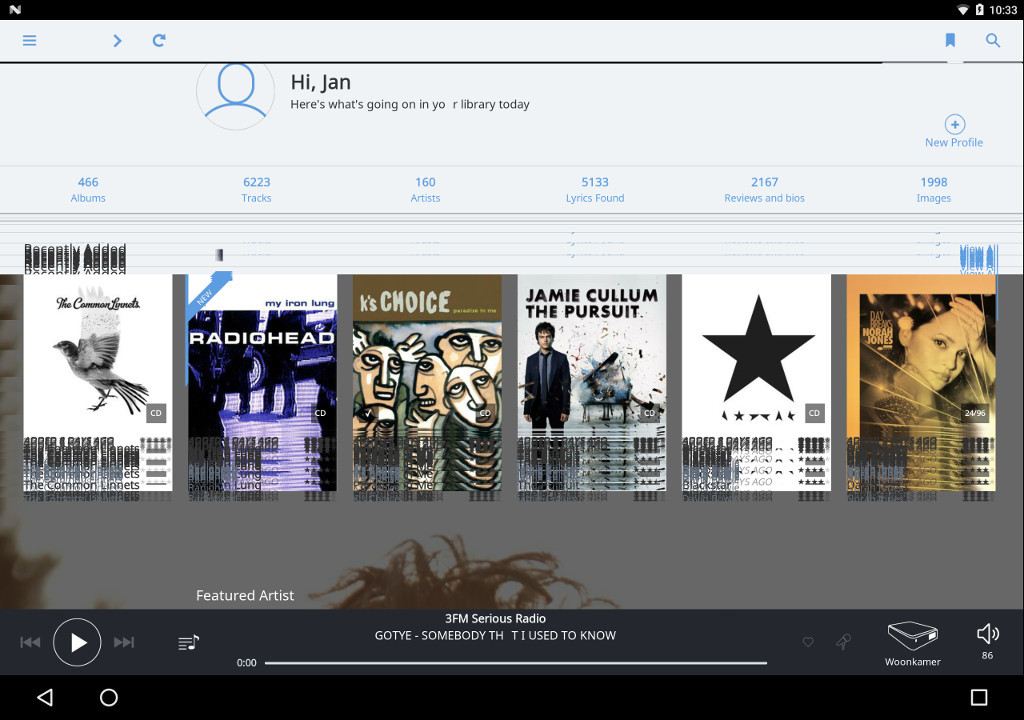 @support, can this be some kind op OpenGL issue?

…Another one, this time the screen is scrambled with all kinds of icons: 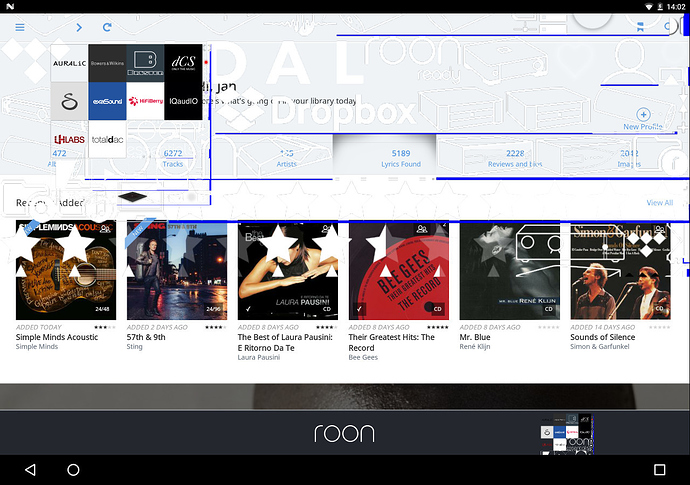 Hi @Bluebeat —— Thank you for the report. Unfortunately, this looks like a performance issue, meaning that Roon needs a certain amount of video memory to run but for some reason your device is running low, which is causing issues as the interface is rendered.

In most cases, this means too many things are running at once, or something is using an inordinate amount of memory. Does this persist when you restart Roon? What if you quit other applications first? What about after a reboot of the device?

We’re always looking for ways to improve Roon’s performance and we may be able to make this better in the future. For now, we’ve found that in most cases these issues tend to come down to a device (usually in a temporary state) on which the required graphics memory is simply not available. Let me know how you do with the tests above and we can look into this further if you’re seeing this consistently.

Thanks @Eric for your reply.

Restarting Roon and rebooting the Pixel C helps indeed, but the behaviour is recurring.

The point is, that I don’t use that many apps at the same time on my Pixel C. I’m not into social media at all or use f.e. YouTube much, so there are not many video memory consuming apps in play. That is except for one app for watching television, that could be the culprit. I will keep an eye open for interference with Roon. Then again, my Oneplus One is missing characters too, as I said earlier in this thread, and I don’t use that app on my phone. And I’m only experiencing this kind of behaviour with Roon. However, I’ll keep you posted.

I can’t say that there’s an obvious connection between Roon and the TV app I was talking about. I removed it for some time but the behaviour of Roon didn’t change. Roon is the only app I’m experiencing the disappearing characters and other glitches reported in this thread with. It might be a Android related problem, the Pixel C is running 7.0, the Oneplus One 6.0.1, it might be hardware related. But annoying it is! 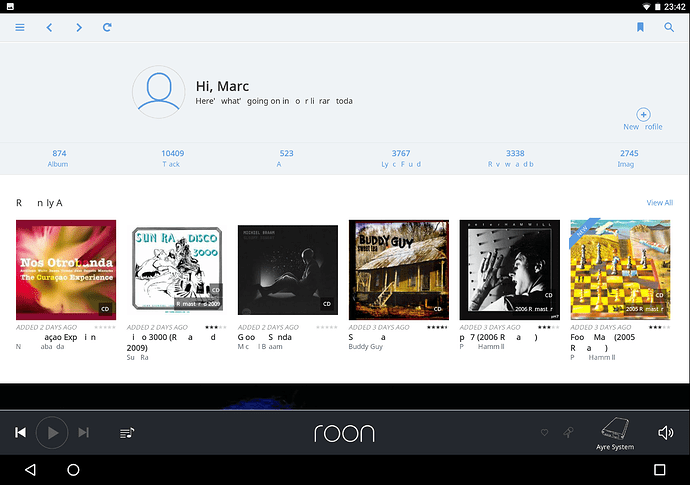 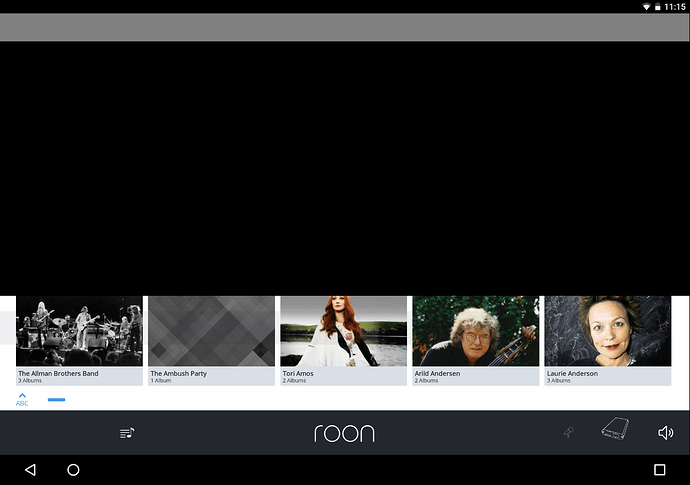 I just installed Roon remote on my Galaxy S5 and encountered this issue. It is resolved by closing all other apps and restarting Roon remote. I have at least a gig of spare internal memory on the phone and no other apps do this. Not the end of the world, but annoying if i want to use it for more than Roon…which, of course, is most of the time.

Also getting missing characters from time to time. Not the end of the world since a restart solves it, but gives an otherwise great app a bit of an unpolished feel.

I notice the same thing using the tablet version of the Roon Android app on my Google Pixel C. I don’t have anything else running in the background except Chrome with three tabs open. Closing the Roon app and reopening fixes the problem but it comes back after multitasking a couple of times. I haven’t noticed any real patterns to this so I will update if/when I do.

Allmost a year later, and no progress. Maybe it’s something that’s the general GUI overhaul is meant to address, if so, I’d like to know. However, many Android users keep mentioning this behaviour, and it’s annoying for them too.

@Eric
Maybe @Carl_Henrik_Janson has a solution, see his post It just might apply to this problem too.

@Bluebeat, “my” problem is that when Roon Android looses gui focus (becomes invisible to the user), for example due to reading news in a browser, then playback becomes staggering, which is indicative of the following, which again should be looked into at the earliest possible convenience by the Roon developers:

Roon are doing cpu/gpu or otherwise intensive tasks on the GUI thread that should either be paused when gui focus is lost, or, probably, should be executed in another thread than the main thread. This WILL solve this problem, and the simple reason is that the app WITH GUI focus will always get priority on top of apps that currently have lost GUI focus, in this case Roon. See my post referenced above, and take a look at Android design guidelines regarding proper thread usage; developer.android.com. Hope to see this error gone in the next update, I have also been waiting for “a year”.

Hey @Carl_Henrik_Janson, thanks for chiming in!

Yep, that’s what I understood from your post. The thing is, the reason you’re giving for this behaviour of Roon just might be a reason for some other odd behaviour too, like the problem documented in this thread. I don’t know of course, I’m not an Android expert at all, far from it! It just struck me as a possiblity. Do you know if disappearing characters could be caused by Androids thread priority rules, as you described? Thanks!

Not familiar with that problem, but shall be on the lookout. You might investigate this problem on a forum called stackoverflow. Most problems, and their solutions, are described there, in a programmatically perspective. If found, it could be useful for Roon developers.