Hi there. I noticed this on one Steven Wilson album being stubbornly credited as “Steve Wilson”. I fixed all metadata, tried forcing file metadata over Roon’s, re-identifying the album, but still “Steve” shows up there. He’s even listed in the credits (which I’ve unchecked)

How do I fix this? It’s triggering my tag-OCD! 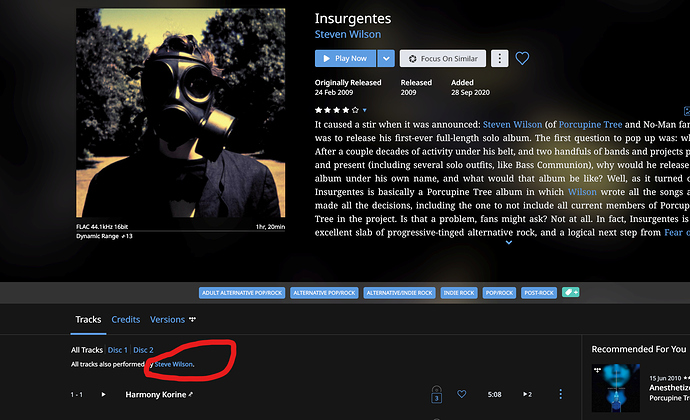 In the album editor, scroll down past primary artist links until you get to the credits section. In there, you will find “Steve Wilson” entered as a primary artist. Remove him.

Hi Brain, I mentioned this but I had unchecked it. Is there anywhere else to look at??? Is this on Roon’s end? I tried searching for metadata using mp3tag and couldn’t find this artist 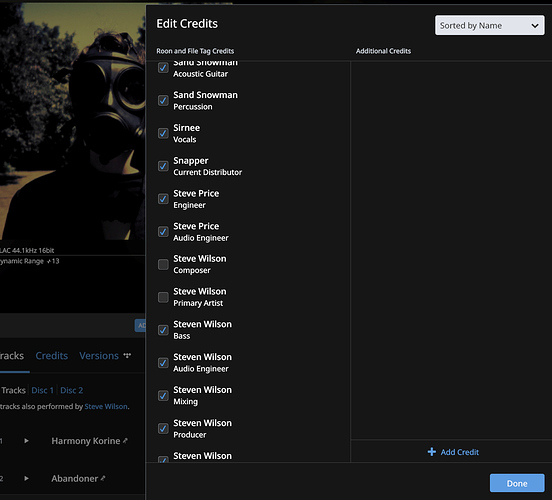 That’s strange. I only added and checked the Tidal version, and deleting the credits in the album editor removed Steve. Thus I don’t see Roon as having added him elsewhere.

So he’s not in the album edits, if you open the track editor, is he there? (And he’s not for me)

EDIT. I’ve just re-identified against your double album and Steve shows up in the track edits. I removed him from there and he no longer shows

Hmm I didn´t get what you did, but tried re-identifying and we won’t disappear from there

EDIT: How do you edit Tidal versions? I’m not able to edit anything related to Tidal

The first time, it was identified (correctly) by Roon as a single album, and for that, the track metadata did not include Steve Wilson.

As you were still seeing a problem, I looked closer and noticed that your version was the double album edition. I then forced Roon to identify the album as the double version and could then see that the metadata for that had Steve.

To fix, select all tracks (long press or right click, then tap the select drop down to change to select all, or ctrl-a) and edit.
Scroll to credits and remove Steve. This KB article may help.