Using the Mac migrating software will break Roon. Best to install new and restore a backup.

Not migrating. This is my existing MacOS 10.15.7 instance. I suspect I didn’t do a clean install. More just deleting the Roon server folder in the library and reinstalled the server app

After not using for a week, could not connect to Roon Core. Tried rebooting Mac mini and reinstalling Roon Server but still saw issue. Checking one Roon software on Notebook see that core is stuck on “initializing”

I see there have been a few posts recently on this recently, but the only solution appears to be to run the full Roon software instead of the Roon Server. As this Mac mini is getting. little old and slower, I don 't really want to do that.

Is this a bug that has been introduced in the recent update. All worked fine a week ago. 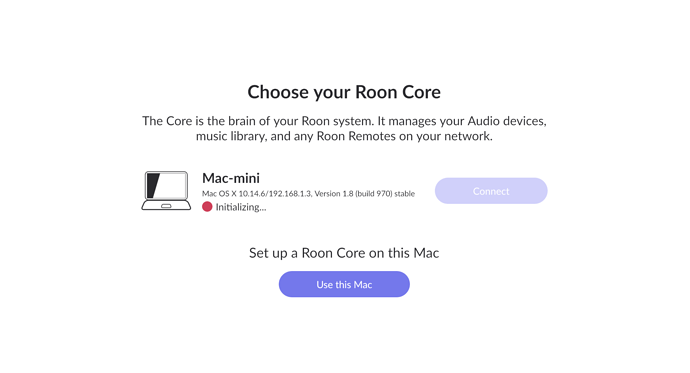 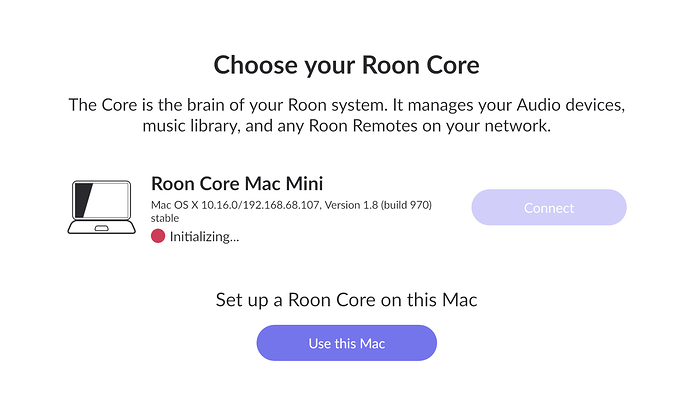 I’m using Roon for over two years without any problems, dropouts and connection loss occurs occasionally, but restarting the device (Mac, iPhone or DAC) always helps.

Until yesterday, Roon on any device has not been able to find the Core. I did do nothing, it just worked one day and the next morning it didn’t.
So I have restated devices few times without any success,so I’ve updated macOS to the latest release and re-installed the RoonServer app but NOTHING happened. So I click on Choosing New Core setup — Roon could see my Roon Core on Mac mini but it’s initializing… probably forever.

I’m desperate with no idea what is the next step I should go. Could help anyone?

I have set up new Core running on Roon app instead of RoonServer app. I works, at least for now. It seems not as stable as RoonServer (experienced few crashes within first 5 minutes). Will see if it’s full alternative.

Yes there is and a fix is being worked on

Good to know the problem is not on my side. Roon all-in-one app works fine.

I can confirm that the full Roon all-in-one download is working on my MBP as well. Thanks for the tip, @Ales_Micka!

Well, except my Playlists which have the same issue that I’ve been having for months when trying to migrate from my NAS to a MBP. 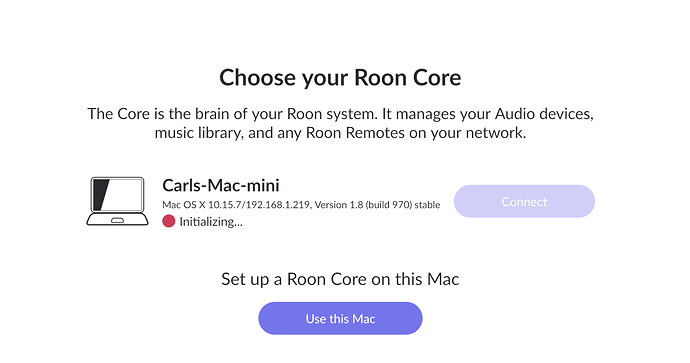 Would be good to understand where the ticket is at for the fix. I’ll install the Roon all in one app in the interim.

As with most bug fixes it’s probably in testing and unlikely to be pushed for public release until the weekend is over and support is fully on shift again for weekdays.

I’m currently experiencing this and can’t seem to figure out how to get it solved. I’ve rebooted my Roon Servier Mac Mini and whether trying to run the client on my iPad or directly on the Roon Server, I’m in an endless “initializing” status. Version 1.8 build 970.

I have no clue where to start with troubleshooting. Network is fully in tact. Not changes at all to my router. Full access to the internet.

I’m experiencing the same issue on my Mac Mini 2014 that I had been using as my RoonServer for years.

I recently got a M1 Mac Mini to replace it and forgot to back up my old server prior to installing RoonServer on the new Mac Mini.
When trying to go back to my old server to do the backup, I’m getting the same “Initializing…” error.

Both Mac Minis are running Version 1.8 build 970.
The M1 Mac Mini starts just fine, but the old one is now stuck.

I tried installing the full Roon on the old mini, to no avail.

Is there a way I can access the cache/backup of the old Mini despite the startup issue?

Edit: as I was typing this, the old Mini finally showed “Connect”.
However, when I click on it, I’m getting the login page and quickly after that an error message shows up saying that the Core wasn’t connected. I can’t do anything on this Core.

Edit 2: I’m getting the same error on the new Core now…

I tried installing the full Roon on the old mini, to no avail.

Changing from Roon Server to Roon (or vice versa) necessitates renaming of the Roon (or Roon Server folder) in the Library.

Then try this method:

Roon Core will not start on Mac Support

What does “See separate message in the category” actuall mean? How did you sort this?

We cannot thank you enough for your continued patience as we navigate this issue. Not being able to access and connect to your core is immensely frustrating and I completely understand the gravity of this bug. I also wanted to thank everyone again for providing detailed reports of the issue.

I have a good update to share: we have discovered a solution to this issue, and are on the final stretch to getting it released to you all. I can’t comment on a specific timeline, but we are without a doubt on the home stretch.

In the meantime, if you’d like, you can download the Roon-all in one app which should connect normally. Let me know if you have any questions, and I will follow up soon with more updates

In the meantime, if you’d like, you can download the Roon-all in one app which should connect normally.

Hi Benjamin, what is this all-in-one app you speak of? I don’t see mention of it on Downloads – Roon Labs… 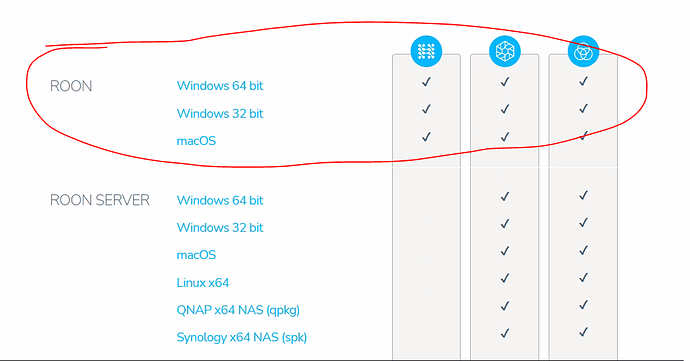 The basic Roon app, as I’ve circled in red, is also known as all in one, because it is in essence a roonserver and client in one package. However, it can also just be a client if you have another core alredy on the network, when you install it, just connect to that core and the server portion won’t be activated on the PC.

The basic Roon app, as I’ve circled in red, is also known as all in one

Thanks Rugby, makes sense. However, Benjamin said this:

I do have the Roon app on a Macbook Pro, and it can’t connect to my Roon Server running on a separate Mac Mini (probably due to this bug). Do I not understand what @benjamin was suggesting?

@Matt_Armstrong I think @benjamin means connect locally. So rather than install RoonServer on your Mini you would install the full Roon package on your mac Mini (probably the same one you installed on your MBP), and during initial setup you would choose the option that’s labeled something like “Setup this device as your RoonCore” (sorry, don’t remember the verbiage). Another way to think about it is you would install the same Roon dmg (circled above) on both your Mini and your MBP, but on the Mini you would set it up as the Core and on the MBP you would use it to connect to the Core. Hope that helps.

A number of Google Wifi mesh devices. The Mac Mini is plugged into one of them by Ethernet. I’m able to connect to the Mac Mini with remote desktop.

n/a, as I can’t connect to the core at all

I upgraded the core and updated macOS at the same time. After this I can’t connect to the core. All my Roon remotes say that the core is “initializing”. It has been like this for a few days – I can’t precisely remember, as I left it for a while hoping it would fix itself.

I have uploaded a “Matt Armstrong Logs.zip” to the Roon logs upload server as described here https://help.roonlabs.com/portal/en/kb/articles/logs