RoonServer will not update to Build 242 [Resolved]

I have been trying to upgrade RoonServer since build 242 came out, Roon client on the same MacPro has upgraded fine but RoonServer gets three quarters of the way through then comes up with an error (See attached image).

Am I doing something wrong or is this an issue? 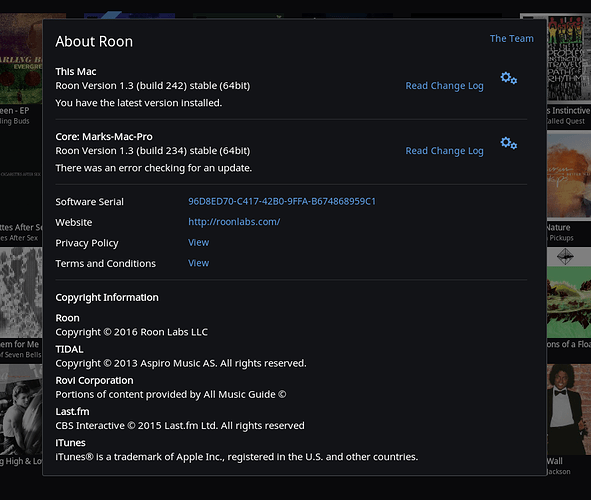 Suggest you download and reinstall the app on the core perhaps. You wouldn’t have to remove anything at this stage. But it might be a good time to check your backups of the database are working in case you need to start from scratch.

I thought I might do this as you say but if the issue is with RoonServer then not raising the issue with support won’t get it fixed.

If the issue is with my set up then re-downloading and installing build 242 will hopefully sort it out.

I copied my RoonServer folder onto a mounted hard drive and then copied it back to the Library folder under the new Roon account, things did seem to go out of sync but once I re-booted everything was fine apart from some albums not playing. I found that this was down to permissions on some of the albums folders.

The fact that RoonServer stops three quarters of the way through its download suggests to me that it might be a fault at Roon’s end.

This could be the reason. I did the same and set up a separate non-admin account for my MBP to auto-boot in after setting up Roon with my “main” account. RoonServer updates failed for me, too, with a very similar (or even same) effect as you see. It turned out for me that the permissions of the RoonServer executable did not allow the user that RoonServer was running from to update the executable.

So, you might want to check the permissions of the RoonServer exe as well.

I concur…there are pretty specific ways to do migration. Moving things between users is not the ideal way to have this done for the applications for sure but seems to be no reference for this in the KB.

Perhaps a reread of https://kb.roonlabs.com/Migration is in order

Thats twice in 15 mins I have referenced this KB item

No one is asking you to do that. Run Roon as yourself, and let Roon write to your own home directory. On Mac, we write a tiny lockfile to your home dir, and then write quite a bit to ~/Library/Roon/. Users running the app should have permissions to write to their own directory. This is pretty common UNIX behavior. You are failing because you can’t write to your own home dir. chmod u+rwx $HOME; chown `whoami` $HOME Roon is meant to run locally per user, and not system wide. If you want to forc…

Thank you very much gentlemen, I’ll give all that a thorough read through.

I’ll start from scratch and restore from a back-up.

I don’t know if this will fix the updating issue for any future builds.

One thing occurs to me, should I have restored an earlier backup from before I migrated to RoonServer?
Does a restore also restore all the same folder permissions?

Any more help and advice would be greatly appreciated.

Hi @oneofmany ------ Thank you for the report and sharing your observations with us. The feedback is appreciated, my apologies to hear of the troubles.

As Danny mentioned, we would like to grab a set of logs from you so our team can have a closer look into what may be going on here. With this in mind, may I very kindly ask you to please follow the instructions found here and dump us a set of your RoonServer logs.

I hope this is what you need, please let me know if I have done this incorrectly. I don’t know if it will make any difference but my MacPro has been firmware hacked from a 2009 4,1 to a 2010 5,1. It shouldn’t make a difference as the motherboards in these Mac’s are exactly the same but I’m far from an expert

Hi @oneofmany ----- Thank you for the following up with me, very appreciated!

Moving forward, I have downloaded the packages (thank you) and noticed that there are only two log files present in both. Before I pass these materials over to my techs, can you verify for me that you had zipped up the entire “log” folder found within the “RoonServer” folder on the MacPro.

Hi @Eric I had only swapped over to RoonServer on the 10th of July and had only just manually downloaded and installed build 242. I did zip the entire folders but I will double check when I get home later tonight.

That looks to be correct. In the Build 234 log folder there were twenty Roon log text files but only one RoonServer file.

I have created a new Build 242 zip file for you, its only got one extra log in it but I figured that it would not do any harm:

Hi @oneofmany ----- Thank you for touching base and verifying that information for me, very appreciated!

Re-confirming that all materials have been received and are now in our queue to be evaluated by a member of our tech team who will conduct the analysis of your logs. Once my report has been updated and passed back I will be sure to share the team’s thoughts/findings.

Hi @oneofmany ----- I wanted to touch base with you because our team has conducted their analysis of the logs you’ve provided to us (thank you again).

Moving forward, according to your RoonServer logs we are seeing that build 242 is indeed running. Can you please provide another screenshot of the “About Roon” window like you did in your first post.

I’m thinking we may have crossed wires, it would not update to Build 242 from 234 but in the end I manually downloaded build 242 and installed it. It’s been running stable ever since.

I’m really sorry if I have wasted your time, I knew I should have left build 234 running (I even said that to another forum member earlier on in this thread).