I don’t see any of the Schiit Audio DACs on here: RoPieee | Audio Hardware

Anyone know if they are supported? I have the Lyr with DAC, and want to connect it via USB to a Raspberry Pi 4 B running RoPieee.

Secondly - any recommendation on which memory capacity I need for the Pi? 4GB?

You are never going to regret going for more RAM but if only running Rosie it seems pretty efficient. I went for the 8GB purely because it gives more software options

I don’t see any of the Schiit Audio DACs on here: RoPieee | Audio Hardware

That list is for native DSD streaming, which is not supported by Schiit. Schiit is compatible with standard USB audio and will work with your Lyr.

What @mSpot said re: DSD.

Your Lyr should work just fine as a USB DAC connected to an RPi 4. In terms of RAM, Ropieee is a very light piece of software and will work with even a 1 GB RPi 4.

There is no reason to get a Pi with more ram, as RoPieee won’t use it and doesn’t need it to run well. (I have measured ram usage over time, using a mixture of pi3, pi4, w/ displays, XL and so forth.)

The one spike in the screenshot is NOT RoPieee. 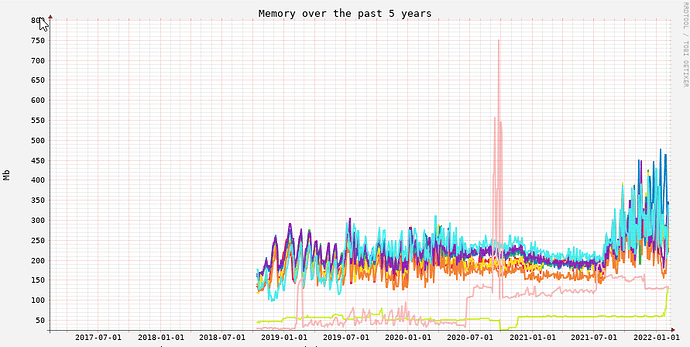 I’ve been running RoPieee XL and Volumio on RPi 4 with 2 GB for the last 2 years, and works fine. RPi 3 would also work.