Ropieee is great with my Audiophonics DAC

I have exactly the same as a part of a kit.

Have solved the flat cable problem.

Cut off one side and scratched to other open with a sharp knife.
Works!
So 30cm is possible for the 5inch display length.

Thanks this helps a lot

Was thinking about the integration of the 5 inch display and had the idea using a passepartout.
Quick test, cut the passepartout, attach to 13cmx18cm alu frame.
I think it’s worth continuing this path. 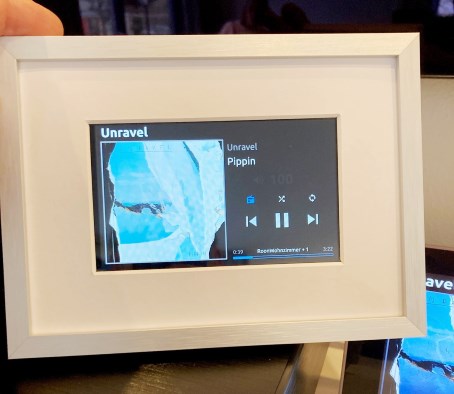 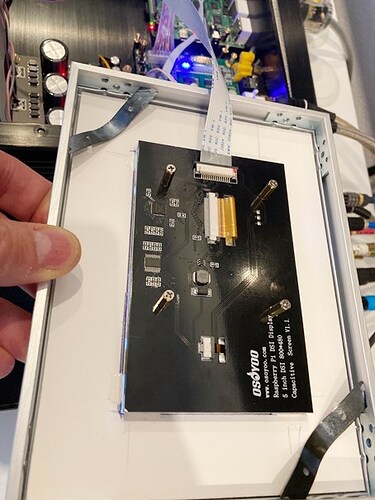 Thats awesome! Is there a guide out there for attaching the display that only shows the bit and sampling rates? Id love to be able to display that info

Hi,
sorry, there is no guide as the display is connected to the DAC and not to RaspBerry/RoPieee.
But I can prepare a simple overview on what I have done so far.(try do do it this evening)
But please note that the second display has nothing to do with Ropiee.

I have a similar DAC ( Audiophonics ESS Sabre 9038 Q2M double mono) with the little display. It works directly off the DAC circuity and does not require any driver.

As already noted, the DAC supports a small display without any interfacing with the Raspberry system. 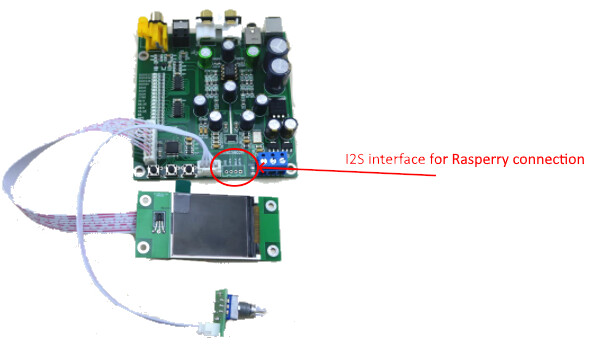 As you can see on the picture it is directly connected to the DAC board.
I use I2S interface for audio data connection to the RaspBerry using Ropieee.

Let me know if you have further questions. Maybe I can draw a complete block diagramm with all boards to show what is connected where if required.

Update on the display topic.
Have now tested 50cm flat cable. Works!!
I also have used a smaller aluminum frame with 10cm x 15cm and passepartout inside.
Think this look better than the bigger one posted earlier. 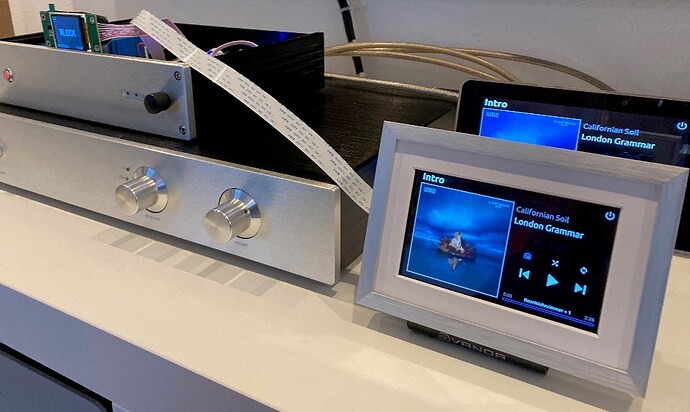 @ Klaus_M_Meier I have this DAC too and I agree in your “pearl” statement. What a price/performance ratio! Never heard such an “analog” sound from a DAC in this house, in the meaning “natural”, no digital provocations of any kind. Observable on “voices” that has a breath of air around them that is almost magically real. Soundstage is truly excellent. The soundstage is also wider than my old DAC, which is probably teaching me something about double mono benefits. (I have a 2xmono power amp as well).

The creator of Ropieee has turned down request to adjust ropieee for this DAC and its right-most display. A pitty, since Ropieee is a great compilation and this is a great DAC. Would have been a great combo.

HOW TO GET RIGHT DISPLAY WORKING ANYWAY:

But, you can get the right display working with Roon the following way: Install AudioPhonics Volumio image as found on their sales page for this product. Then install the Volumio Roon plugin. It will grant the same functionality as Ropieee, with i2s and USB alternatives etc, and the right-most display works perfectly. So, for this DAC, the Volumio RPI image is a better solution. No disadvantages found. The upside is that you can in addition connect a USB drive with music to the RPI and use Volumio for that, or, just use it headless exactly like Ropieee.

PS: I am enjoying soundpimp.com on this DAC, an error corrective technology that takes quality and naturalness to the next level. SoundPimp precorrects in the digital domain for the inevitable and devastating (read: Severe!) cross-talk that takes place between speakers and ears. No way around that, but to try to minimize it. SoundPimp significantly widens the soundstage and increase the presence of the oh-so important fine-grained details of a recording. It means for one thing, that it is easier to discern a good DAC from a less good DAC. 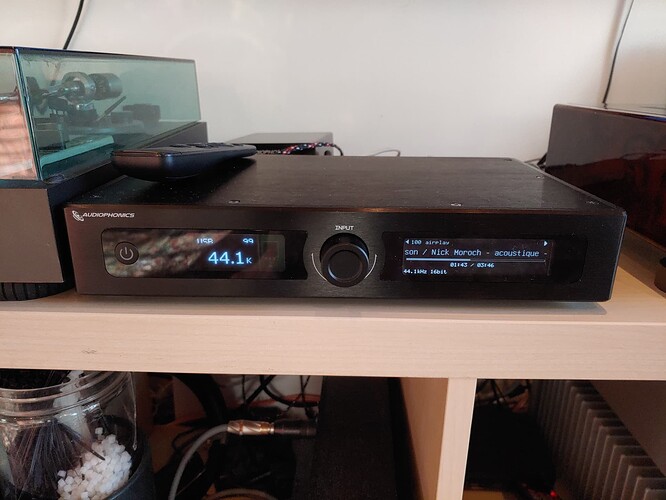 Thank you for the idea and I will try it out next opportunity.
Did some tinkering in the mean time

Some months ago, I bought this Audiophonics DAC-Streamer and I am pretty happy with it as nice streaming DAC with an integrated Roon Ready Raspberry Pi bridge. You rarely find in a consumer grade DAC exchangeable OP amps, but here it is the case. Standard issue is a pair of JRC 5534 OPAs, that sell for less than a 1 $ a piece. [image] After diving into the subject of audiophile OPAS I decided to try the Burson V6 single discrete OPAs. Installation is plug&play and was done in less than 15 mi…

Installed Volumio from Audiophonics website and activate the Roon bridge plugin though the web interface of Volumio. No second display as of now. Looks like the Volumio version gets overwritten by an updated version which kills the display function (just a guess).

Yes. That kind of idea - new opamps - is precisely a good example on how to improve a DIY DAC. Can you state something about what you achieved. A good feeling is one thing and could be worth it alone, but audio quality, can you state it was improved?

Another thing that interest me, would be to inject for example IanCanada’s jitter reclocker (FifoPi) between the RPI and the DAC. It would require a new backplate, either 3d printed or we convinced AudioPhonics to sell an alternative “jitter survival kit” backplate + FifoPie.

After writing about Volumio+Roon, I found that I cannot at the moment get the i2s to work with that Roon plugin (but with Ropieee). But second display after all updates is working here. i2s problem is probably a software issue either in the plugin, or I had 10 thumbs yesterday. Looking into it.

Other than audible impressions I have no measurements to offer. At $90 I thought it is well worth the experiment. I spent way more money on ‘upgrades’ that turned out to be of little or no effect to my ears (e.g. linear power supplies).
Only downside I noticed with the new OPAs is an audible thumping noise when switching the unit off or stop playing. Not of any concern for the speaker, but a little unexpected.

Looked at the Ian Canada re-clocker myself, but shelved it for now. Need to build up way more knowledge before I tear into a running system.

yes, there are some “hot debates” on upgrades, in particular

I am the developer of SoundPimp.com, an error corrective technology that in my mind is much more important than anything else. Listen to demos and contact me if you would like to try it. We can arrange something. We are currently working on that technology for a hardware solution, evidentally to be integrated with a DAC like the one we are discussing.

LPS: Bought the bargain basement Audiophonics unit that they offer for this DAC. Other than more heat losses nothing audible (to me) to report. And it looks way cooler than a wall wart…

This I did not find when searching the other day. A candidate. Another is the PSU from Allo (Kali). Investigation in demand. I have something very similar but 5v (from AudioPhonics). Again, a comparative test against regulated versions has not been done here so fare. Yes, looks much cooler. Indeed. But this PSU you suggest can be a little weak, where one to add more power consuming modules (like reclocker).

Measured the DAC with the LPS to 16.5 W with simultaneously running RPi via Ethernet 192/24 and DSD 512 via USB.
With its an efficiency about 40%, the power pickup up the DAC is probably around 6 W at full throttle.
Looks like there is room for a reclocker. If I get to it, I measure the wall wart that came with it (SMPS).