Ropieee on the New Raspberry Pi 4 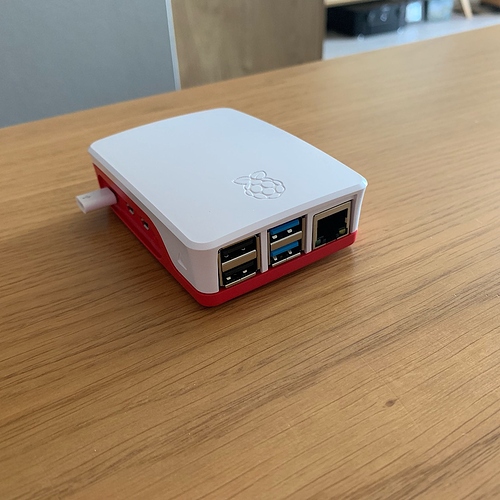 I have never played around with a Pi before so jumped on board and got the 4GB model, HDMI cable and official power supply. What’s my next step to make a Roon endpoint?

Where can I buy a decent metal case?

That looks nice, do they sell it in black?

I have the Flirc on one of my 3s and is a really nice case. It’s diecast with a built-in heatsink. The base is plastic. Has a nice solid feel and good finish.

Thanks for letting me know. Do you know anywhere I can order from the UK? Amazon doesn’t have the newer model yet.

This will be my first Pi as an endpoint as a temp streamer while mine sells and I can afford my new one.

I bought the 3B version from Pi Hut. Doesn’t look like they stock the new model.

Hi, I have purchased this case temporary because only this colour was available in stock. I think these are made in black also.
Aluminium Flirc case with decent cooling for Pi 4 looks nice but is not available yet, on pre order right now.

I have one of this above for my Pi 3 and it is great.

Thanks but I think Flirc case is the one for me. They sell a usb IR receiver is that worthwhile? Can I control roon using it?

Grrrrrr… my Pi 4 is not coming today

Anyways, I’ve prepared a beta image. Someone brave enough to try it out on a Pi4? If it works I can release a stable version ‘blind’.

I will try it later today

Downloading now… Will report back in half an hour or so…

Thanks for trying, @spockfish – but sorry to report no dice.

All lights (green, red, both network) frozen. Pi does not report itself on the LAN.

Can only hope yours will find its way soon. Such a lovely board…

Thanks for testing anyways!

While waiting on Ropieee, I’ve got the PI4 working with dietpi/roonbridge.

Owwww this annoys me

anyhow, can someone test again? http://image.ropieee.org/20190628-ropieee-ose-beta.bin

ill give it a go

Same as reported before by @RBM

I am a little bit concerned, Pi 4 is running rather hot, at 68C on DietPi and roonbridge. Strange. I have never seen that high temperatures on Pi3.

Im not really concerned, its cheap, but mine is running at 66C

don’t be. the pi 4 is on a smaller die size hence it gets hotter