I finally got round to installing ropieee for the specific task of a display for my streamer… In principle it works great and I am delighted. However the touch controls sort of work but not really. If I hit pause the screen kind of all moves sideways as if I had swiped it, revealing the screen again but it does not pause.

Now to be fair this is not the official pi screen, so appreciate the developer probably does not want to get involved with the variants out there and to be fair its not critical, but perhaps its something else?

Moved to the right category

Are you using HDMI to connect the screen? If so then I recall that isn’t supported.

I altered your thread title so as not to cast aspersion at Ropieee. Hope mods don’t object.

Hi douglas, no its not hdmi, its via DSI connector.

For all intents and purposes it works, I am not overly worried about the touch controls not working, but would be great in a future revision to be able to not see them

Really chuffed with it though, such a nice implimentation.

Apologies I meant no offence.

I’ve got the official screen and honestly it’s touch capabilities aren’t that great compared to say my iPhone, iPad, or even my Dell XPS screen.

It seems to really want a nice clean poke at the hit zone to work well. IF you sort of make a glancing touch it thinks it’s a swipe or something. I notice that I am very deliberate with the touches and it works reasonably well. I’m assuming you are too.

There are some mouse settings that effect click and double click times when using the screen with a desktop enabled OS on the rPi. Maybe some of those hooks are still there in this limited distribution.

No problem. Some people just read thread titles and not the thread itself. I used to read every thread but stopped doing that.

Yeah I can seem to get random stuff working, for instance if I hit the image of the album a volume control comes up, but thats a bit sketchy to use.

Quite honestly its not a big deal, the main thing for me is the screen turns off when not in use and turns on when it is, the solution I had before pointing to the roon webpage turned off after ten minutes and that was that!

This is the screen I use:

The DSI connector is brill, so much better than the janky hdmi in out things that appear on ebay, and the picture is lovely in landscape too.

Is it possible that your “hit zones” are flipped over 180 deg? I believe this was a problem for another aftermarket screen discussed on this forum before. There’s a way to flip it over, but I can’t recall exactly how.

Oh my god give that man a cigar thats it!

If I hit top left it corresponds to controls bottom right.

More digging to do!

Ok so turning the display rotation from rotated to default fixes this. 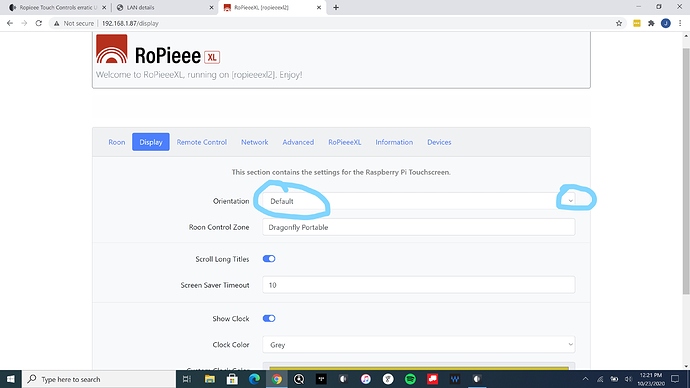