Hi, after some extensive googling and a whole lot of luck, I was able to install HQPlayer NAA on my RopieeeXL! And it works!

Since it involved a lot of trial and error and I’m a complete Linux noob, I don’t have step by step instructions to repeat the process, but here are the general steps.

I know step by step instructions would be much more helpful, and if I get another pi 4, I can try to document the steps more carefully, but at this point, I’m hesitant to change anything!

One thing to mention is during the HQPlayer make process, I encountered some errors, but I just plowed through and in the end, I got a file that installed properly and is working (eg, it’s recognized by HQPlayer and plays fine). I’m not 100% sure, but the only different I can tell is the volume appears to be louder than using the Dietpi install on the same Pi 4 and same DAC.

One question is what happens when RopieeeXL updates itself? Will that erase all user changes?

Have fun and enjoy!

If things go as planned this will land shortly.

So is NAA the next XL option for installing?

Not that noob it seems anymore

not that I need NAA just yet but its another feather in the Ropieee hat so to speak. Defaulted to Off I assume too.

And the NAA is in there too

NAA implementation works perfect in a first test.
Switching from (and back) NAA to Raat, DLNA and Spotify work.
I use a Raspberry 4 for the first test here.
Very nice.
thank you Harry!

After using HQPlayer you have to deactivate the NAA used (like switching to another NAA or Asio) in the HQPlayer settings. Otherwise, RopieeXXL remains stuck with NAA.

I notice the same thing. However, this does not happen when using Dietpi. Eg., I can switch between raspotify, NAA, Roon bridge and Shairport-sync no problem.

Btw, which version of RopieeeXL has Harry’s install of NAA? I’m still using the image I manually installed NAA on (was worried updating will erase everything).

But when I tried the beta version, my system was stuck with the need to reboot banner so I switched back to stable.

this is the latest version from the beta channel

Thank you! Reflashed the sd card and now it updates properly!

I have HQPlayer NAA activated on my USBridge Sig and it works like a charm with HQPlayer! 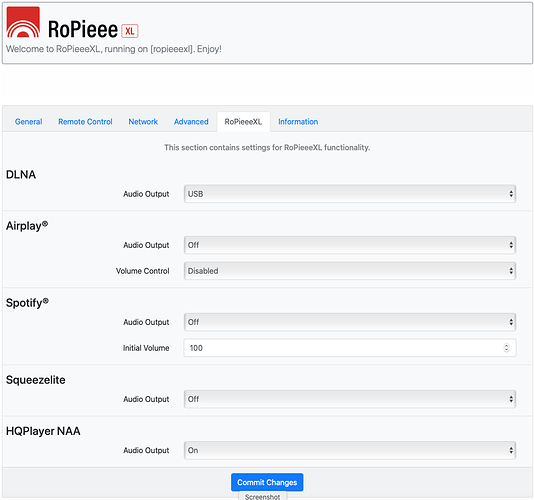 What version of NAA is currently running on RoPieee XL ?

And in future change logs, if NAA version is updated could you add the version number?

For cases where one wants to switch between HQP NAA and Roon Bridge? (without having to swap SD card).

Yes, RopieeeXL has the Roon Bridge