I am planning to buy a Rotel A14MKII with KEF R5 and I would like some help regarding the following questions:

Thanks in advance for your help!

Doesn’t mention DSD at all, so I’d say no.

Just had a look online and it is certainly in the right power range for the Kef R5 speakers, but it looks fine on paper.
I didn’t think these supported DSD so you would need something to convert that to analogue for the input via analogue inputs.

What will you be using for Roon, USB or a streamer?

For additional power you might also look at the RA-1572MKII which is what I was looking at before I bought the Arcam SA30 as it was Roon Ready. The 1572MKII is a very nice integrated amp as well 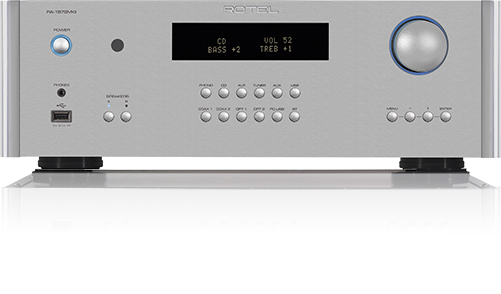 For DSD I am surprised it is not in the spec. I thought if it says “384k Hz” it would mean “DSD”. It appears to be 2 different things: one is PCM data sampling frequency and the other is DSD data sampling frequency. It is missing from the spec of the Rotel. It’s weird because it is written properly on my current integrated amp (AI-503 | SPECIFICATIONS | TEAC | International Website)

Regarding RA-1572MKII vs A14MKII, I have difficulties to understand the main differences: it’s just bigger/more power/more expensive or are they any other big differences?

NB: regarding the RA-1572MKII I found this: the RA-1572MKII does not accept DSD data directly, though some sources will convert DSD to PCM (“DoP”), which is fine for me. Now, I just need to find the same for the A14MKII.

So I need to find a integrated-amp capable of DSD and powerful enough for the KEF R5 (or R7). Does that exist?

If your fine with DoP roon will do that for you if you connect the amp to a windows client via USB.

The only reason I mentioned the bigger amplifier is that they are big speakers and having plenty of headroom for volume levels can be useful.

When I was looking for amp’s before and tested some the bigger Rotel amps they would happily drive harder to drive speakers due to the extra power (and had more control of floorstanding speakers at low volume) I don’t know the R3 speakers though they look very good, so you might want to get an in-store demo.

Other options if you want DSD would be to use an additional streamer (raspberry Pi is the cheapest option) that supports DSD and output to analogue and then use that to drive amplifier through a hat board.

I currently have a couple of Pi’s a Zen Stream and a Matrix Audio mini I Pro 3 driving different device’s.
The stream will output to the Amp at DSD256 over USB, The mini I Pro over analogue at DSD128 and there are plenty of options available if you want to investigate.

John Darko has recently tested some Rotel integrated amps and shows them working with a Pi is your interested in looking on YouTube.

Plenty of them, do you really need/want DSD and have a reason for it, like you already own DSD material. Often it gets converted to PCM at the end anyway (my Arcam converts internally back to PCM 192/24)

(Saying that on two of my systems I convert everything to DSD. It sounds just a little bit better, but not on my main systems)

In my previous post I recommended getting an in-store demo, which I have done a few times. On both occasions I changed my speaker selection based on the results of listening.

What you have already picked may well be perfect together.

You never mentioned how you plan to drive Roon to this Amp or if you did i missed it sorry.

Sorry @Michael_Harris , I saw your question.

And I’m upsampling in DSD128 (limitation from MacOS Core audio drivers, I was told once).

I like the “cold” “transparency” of sound. Apart from that I don’t know much about tech specs.

And yes I plan to go to an auditorium before buying the new system. There are sales until the 20th on the KEF: 1790€ vs 2400€ but that might be the RRP at launch.

So I don’t think Mac supports direct DSD, only through DOP. So you will possibly need something else to give you that, which you are already doing. Does your Teac support DSD over DOP, I am guessing it must. Some devices will work with the Mac and some not. Some require drivers for Windows.

I think you have it in hand if you are going to audition, you will get a good feel for the sound.

I have the A14MKII and I wish I had a bit more power to drive my ELAC Uni-fi because they have pretty low sensitivity. If you go with beefier Rotels you get not only more power but also a dedicated sub out instead of just a pre amp out and balanced input.

I might explore streamers, then. But it’s a new world for me so it’s hard to make sure it’s the correct gadget for my needs.

All right. So I’m starting to have a better idea on what to get. I might upgrade to KEF R7. Would the Rotel A14MKII suffice or should I go toward the Rotel RA-1572 MKII?

I’m thinking of adding a DAC ifi Audio Zen One. I just need to connect it via RCA to the Rotel, correct?

It would be nice to have an integrated DAC/Amp with DSD capabilities. I couldn’t find anything under my budget, so far.

So recommended output is

But that is hell of a hell of a range of power.
But worth trying to test both Amps and speakers at your dealer, so see what clicks well both for you and together.

I have the original Zen DAC in use with my Zen Stream and I have always been happy with it.