On a friends recommendation, I purchased this Flirc case.

Thought I’d share some interesting data. This is ~16*F above ambient. I’m quite surprised this case is this efficient. 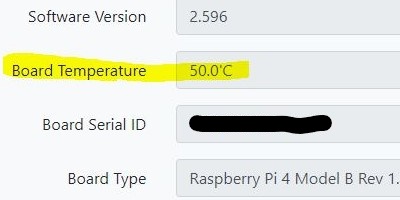 Thanks for you findings, I’m in the market for a RPi 4 case.

Let us know if you do the same or different. If different, post your data!

I have noticed this to. It actually runs cooler than my pi 3 that’s running Ropieee purely as a remote and is open to the air.

Yes, my rPi3 is mounted vertically in a stack of three hats so air can convect upward through the slots between the hats. I also have one of those gimpy little stick-on heatsinks and it’s running at 55-62C when streaming. But 60c is fine and dandy for the processor, so I haven’t bothered to do anything about it. I can’t remember if I have the heatsink fin orientation correct for the current board orientation.

I don’t remember my temp stats but still wanted to add another glowing recommendation for the flirc case.

Never used it with roon but when I used my rpi 4 as a pihole it would occasionally hit throttling temps with the official case as well as naked. Didn’t expect the flirc to make much of a difference but it was just as drastic as the stats posted by OP.

I used my rpi 4 as a pihole

Yes, another member of the advertisement punishing pihole user community!

I run pihole, unifi controller, and homelink on my 3B, and it handles everything the house throws at it.

Actually, I ended up getting the Argon ONE Raspberry Pi 4 Case. It looks very sleek because it moves all connections to the rear. So, I’ve placed it on the audio rack instead of hiding it. Looks like a proper audio component. Maybe not like high-end “audio jewelry”, but I like it

It comes with a cooling fan, but I haven’t configured/enabled it yet. Probably won’t need to because the case’s passive cooling is maintaining a temp of ~37 deg C. When I was running the RPi4 naked, it used to run ~51 deg C. Ambient room temperature is ~25 deg C.