I am running Roon Build 880 on a Nucleus with no issues. In 8 days, we will be traveling to visit the mother-in-law for Christmas and I would normally activate the Roon core on my Dell XPS 15 laptop running Windows 10. Since I simply stream from Tidal and Qobuz, this scenero works well for me.

All of my devices updated to Build 880 with no issues including the Nucleus, Dell XPS 15, iPhone, and 2 iPads. Should I expect the Roon core to work normally on my Dell or is it likely I will experience problems and should avoid activating the Roon core on Dell until Build 880 issues are resolved?

If it’s risky, I can use Audirvana instead. Thanks. 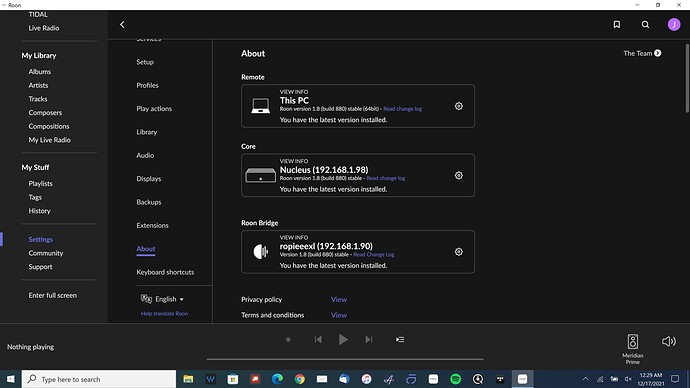 Why not just leave it on the previous version until after the holidays.

Everything is on Build 880. It’s working well as a Roon control device in conjunction with my Nucleus. I’m just leery that activating the Dell as Roon core might bork something until Roon gets all of this stuff resolved.

I only have Windows, it updated no problem. I was a bit confused because there was a Windows update pending

Once all updated. Rebooted (for the Windows update) Roon is working fine. I have not seen any negative reaction to 880 on windows

Maybe just do it and test for a day or so before you leave. If all else fails you have the native apps ?

If the Dell is already on 880, then activating it as the core should be fine. I personally have not had an issue with 880 at all.

Thanks. I normally activate the Dell Roon core the night before we leave. Within about an hour, the Dell Roon core updates itself with any additional Tidal and Qobuz albums I have added to my Nucleus core since last time. Since there are no local files and I don’t do any edits, I don’t have to worry about restoring backups to keep the two cores in sync.

I’m tempted to activate the Dell Roon core tomorrow for a while just to test it. However, if it screws up in some way, I would not be happy.

Why do you think it will screw up ?

Not specifically, but I’ve read 100’s of post of people having problems with Build 880. Not knowing the reasons for some of these problems, makes me cautious. I am somewhat curious to go ahead the try it. I really prefer using Roon over Audirvana.

OK, I finally got up my nerve and just deactivated my Nucleus and activated the Roon core on my Dell. It worked with no issues. I had added 37 albums since the last time I used the Roon core on my Dell. The Dell almost immediately added all 37 albums but was spinning and spinning to add the artwork. So, I closed down the Roon app and restarted it. Almost immediately, all 37 albums were there with their album covers. All is good. No issues whatsoever with Roon Build 880 on my systems. Thanks Roon.

Had another adventure today. My keyboard was starting to fail with a couple keys that had become a little erratic. So, I ordered an OEM keyboard from Parts-People 5 days ago. The new keyboard arrived today and it took me a couple hours to remove and replace the old one. So far, all is good.

If you have never done this, it’s quite tedious removing and replacing 60 tiny screws you can barely see. The only issue I had was plugging in a tiny ribbon cable for the finger print reader, but I finally got it. Also, the 6 battery screws would not come out so I had to drill out all of them. 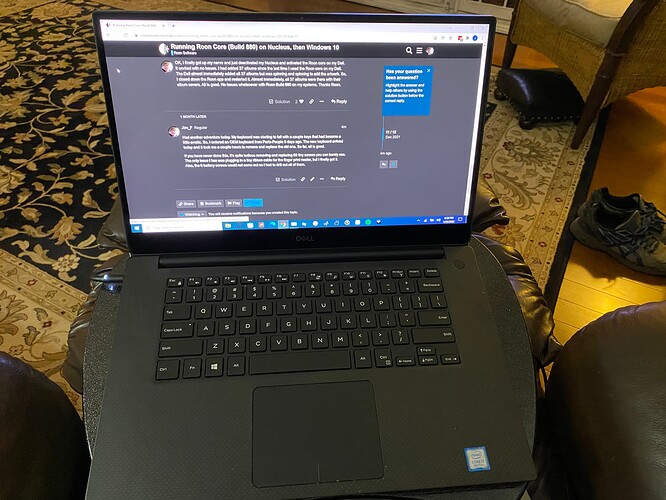 More patience than I have sir!
Last time I had keys start to fail I just bought a new laptop

Was not dissing the machine at all, just my lack of patience with fiddly jobs like that.
Good on you for sure!

Yes, I understand. A new laptop would have been my first choice if this was a lesser machine. I also use it as my “away from home” Roon core and it works great for that.

It sounds like it should be able to handle Roon duties for quite some time yet according to it’s spec’s.

Funny as I just resurrected an out of service work laptop which is a Dell i7 too and installed Roon Core on it for the exact same reasons you have…for travel.

It’s purring along quite nicely.

It works especially well for me since I am streaming only with no local files. I just switch to the Dell core the night before we leave town so it can sync any new albums I have added from Tidal and Qobuz.

Away from home, I always use Verizon hotspot data. I have 135GB between 2 iPhones and 2 iPads. Verizon just changed their plans slightly and gave us another 30GB with no additional charge.