I did as suggested and initially it seemed to work: I looked up albums on my iPad and iPhone and everything seemed to be there. So I closed the Roon app on my iPhone and iPad and went into the room where my system is located to listen to some music. Now I am getting this message when I open Roon to play something (it appears on my iPhone, iPad, and PC) 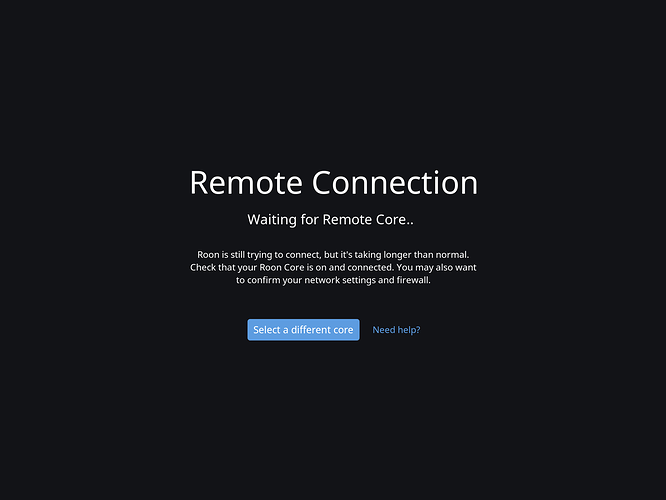 I rebooted my Salkstream III player now Roon seems to be working again, although now it’s a bit sluggish loading a selected album compared to what it was before. As a matter of fact, when I first updated to 1.3, I was impressed with how snappy the response time was; a selected album/artist/etc would load instantly. Now it takes a couple seconds.

Maybe it has to rescan my library or something causing it to slow down (looks like everything is there though)? Btw, I have Background Audio Analysis and On-Demand Audio Analysis set to OFF.

Thank you again for the help. I greatly appreciate it.

Try quitting the Roon remotes and restarting them. If that doesn’t work, then try clicking, Select a Different Core and see if you can connect.

Thanks, Greg. See my post just above yours (we were probably typing at the same time…lol)

Great news. Let’s see if things settle down and you get back to the snappiness you experienced before.

You probably want to turn the Audio Analysis back on, but wait until you’re not listening to music. It’ll take a while.

Is there a particular benefit to Audio Analysis? I’ve always had it turned off figuring I didn’t need it.

It’s a good idea to turn it on and let it finish.

This is what it’s for.

I went ahead and turned it on and will let it run overnight.

I’m still having problems. Sometimes it works fine, then it starts acting up again, either saying it can’t connect or it will connect but selecting an album it keeps saying “loading album”. Or when I bring the app back up it will say “error loading saved page”. 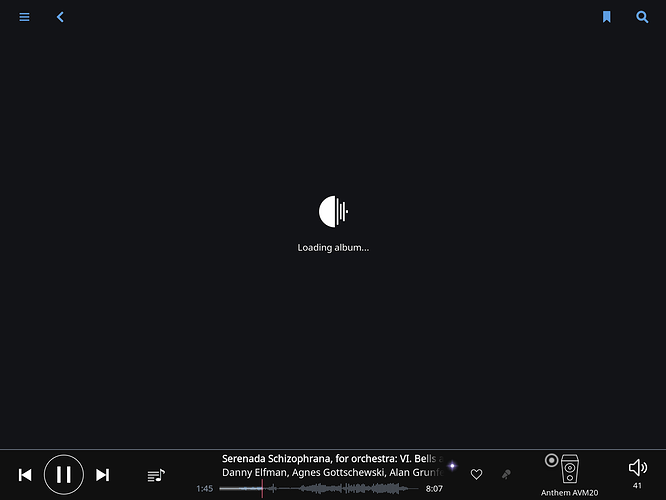 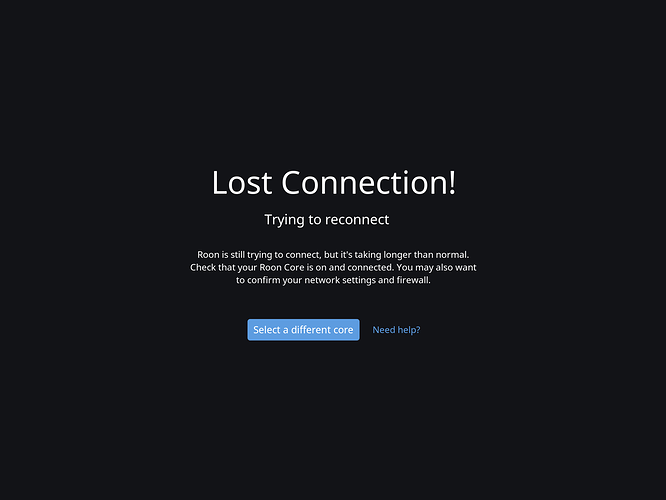 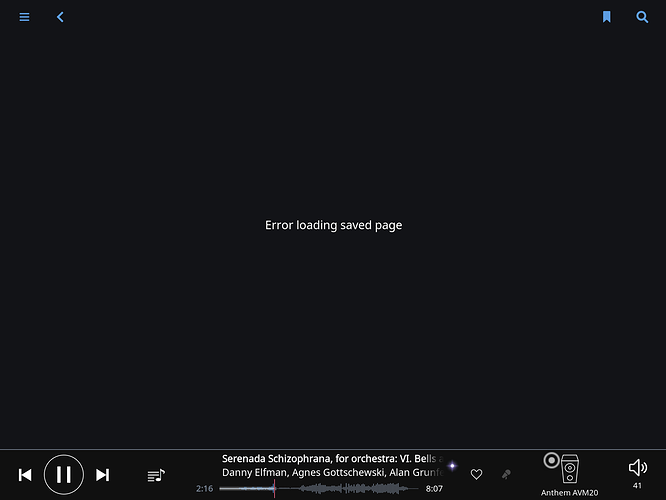 If I touch Select a Different core, this will come up. Then selecting Connect does nothing 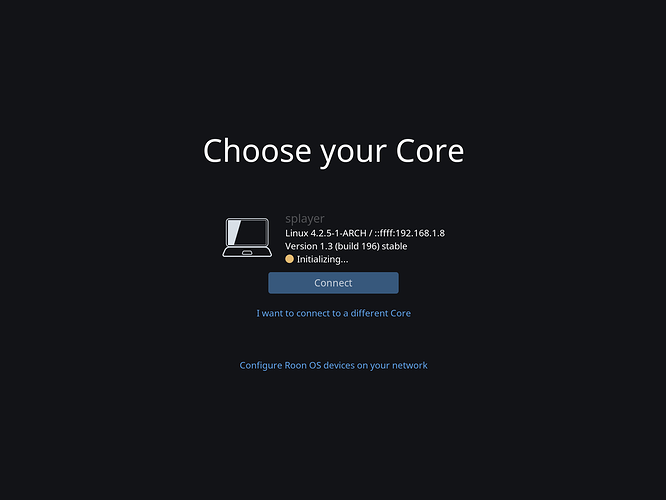 As of now I cannot use Roon at all.

Update: after about 10 minutes it’s now working again. It seems to be a total crapshoot whether or not it’s going to work…so frustrating.

I see that @support has your logs. Hopefully, they will be able to figure out what’s going on.

Do I need to send a current set of logs?

Probably not, but Eric will let you know if that changes.

I (and a couple of our StreamPlayer customers) had this same problem when upgrading to Roon 1.3.

The first thing is to insure that the core and remotes are all on the same version.

James, in your second graphic, it shows the StreamPlayer “DriveNotReady.” If you go through the Add Folder process, you can add this exact same Folder again. When you do, you will probably notice that it immediately starts indexing the music files in that directory. Then you can delete the original folder (the one showing DriveNotReady).

I don’t know why it recognizes the added folder but not the original which was the same. But, so far at least, this has worked for me and another StreamPlayer owner I helped today and should work for you.

VThanks Jim. I did that as recommended earlier in this thread and it seemed to work, at least last night. Today I’m getting the errors as shown in the screenshots I posted today. Sometimes it comes up and works fine, sometimes not.

Edit: I should clarify. The procedure you mentioned did fix the issue with Roon not finding my music. I believe the issues I’m having today are additional issues; and given others with Linux based systems reporting the same it appears there are more issues with Linux to be fixed. Hopefully the problem(s) will be easy to diagnose and a fix will come soon.

James, in your second graphic, it shows the StreamPlayer “DriveNotReady.” If you go through the Add Folder process, you can add this exact same Folder again. When you do, you will probably notice that it immediately starts indexing the music files in that directory. Then you can delete the original folder (the one showing DriveNotReady).

I don’t know why it recognizes the added folder but not the original which was the same. But, so far at least, this has worked for me and another StreamPlayer owner I helped today and should work for you.

Actually, one alternate way to do this @James_Kirkman – you should be able to point Roon at the correct path just by editing the existing folder, as opposed to adding the new one.

Having them both added at the same time can confuse the database, but editing the path should work. Some more details on this process here.

Let us know how it goes @James_Kirkman!

Thanks Mike. I should clarify I used the procedure described here:

We put every release through extensive testing, by our internal QA and by our tireless alpha testers and moderators. Unfortunately, a bug does occasionally make it out the door, especially with a release as complex as yesterday’s. We have identified a bug in the initial 1.3 release (Build 193) related to Linux devices using internal storage. The fix is in place and has now been released as Build 194. While we don’t anticipate any long-lasting effects, there will be some some minor inconvenienc…

I did not add any folders.

This seems to have fixed the issue with Roon not seeing my music files, but it didn’t fix the issues with Roon remotes having issues connecting to the core (see posts and screenshots earlier in this thread).

Hi @James_Kirkman ----- I just wanted to touch base with you here to see if any new progress or observations have been made since your last report. Let me know and If further troubleshooting is needed I will be glad to help. Looking forward to hearing from you!

Unfortunately there’s no change in behavior. Sometimes it works, sometimes not. In the past few minutes I got the “Error loading saved page” then it got stuck on “loading album” and “Lost connection” screen.

I have a strong wifi signal and have no trouble connecting to the streamer with MPad, so I don’t believe it to be a wifi issue.

And as you can see I’m not the only one having these problems with 1.3. The common thread seems to be we all have Linux based systems.

Has there been any progress on your end identifying the problem? Did my logs help any?

I just noticed the title of my thread was changed. Unfortunately the new title doesn’t reflect my current issues. The “drive not ready” error I was getting has been fixed using the procedure in the Linux Storage Issue post. All the other issues/error screens I’m getting have not been fixed.

Perhaps this thread, starting with my post a couple days ago describing my current issues, needs to be split with a new title better what is currently going on?