Same Album showing up more than once

Not sure if this is the right spot for this but Roon sometimes shows mutliple Tidal versions of the identical album.

Here is a screenshot of Neil Young’s “Freedom” in Roon 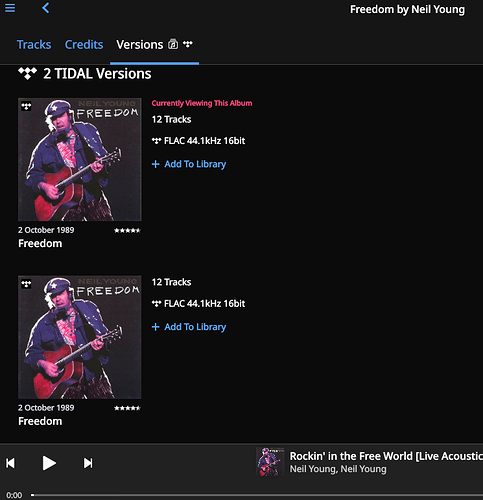 It only appears once in Tidal itself

It looks like this is a case of the album being mis-recognized. If you look at the album track lengths (the last two songs), they are different lengths. It looks like those songs were split differently, time-wise. IMO, this is a bug since they have the same product number, although I suppose it can be attributed to metadata. There may be other discrepancies in the metadata, but I didn’t check any further.
You may have Settings>General>“Show Hidden tracks and albums” set to “No”. When I add both of these albums I see both ‘versions’, but I have that setting set to “Yes”.

That’s a good pick-up, I didn’t notice the track lengths.
Mind you there is still only one version of the album in Tidal, so I wonder what is happening to cause this (presumably it’s a Roon issue)

anyone from Roon have any ideas?
@support ?