Another artist has exactly the same issue.
The correct artist is : Sharon Jones and the Dap Kings, album “I learned the hard way”

ROON core on Windows 10 is correct and displays the artist correctly.
iPad however shows both the group Sharon Jones and The Dap Kings as well as Sharon Jones (as a solo artist). Both Artists contain the same album.

Why would the CORE display one artist correctly BUT the iPad remote, display the duplicated similar artist notations as separate artists? I have tried editing the metadata but cannot seem to fix this on my iPad.

It might be a caching glitch on the iPad app, try uninstalling the app and reinstalling.

I have attempted that as I noted. But it does not help. It is seemingly pulling info from somewhere and the artist and the artist and group are seen as different artists. I thought by editing metadata as file only it would solve the problem. But info from ROON database may be overriding. Is there a way to only pull data from the embedded metadata?
Although I thought that ROON remote is only getting data directly from ROON core which makes this a very odd situation.
Thanks. Howard

Under Settings > General do you have Show Hidden Albums set to Yes on the iPad and No on the Windows machine?

Hi Greg
Your suggestion was in the right area.

What causes the issue is the Sort By artist option.

@support this an error in the sort logic or is it expected?

Do you actually have two copies of the Paul Butterfield album? If so, Roon may have identified them differently. You could Edit the album and click Identify and see which version of the album Roon is using.

Only one copy of the album.

It identifies without a pic. Says this is the metadata its using.

Thanks for the report @Howard_Ipp. This mostly sounds like what I would expect.

Sorting is set independently on each device, so if all your devices are sorting by first name, Paul Butterfield and The Paul Butterfield Blues Band will both sort to P, since Roon always ignores “The” when sorting.

If one of your devices is set to sort by last name, Paul is going to move to B but the band is still going to be at P, since bands don’t have last names (meaning, Rolling Stones won’t sort to “Stones” either).

Generally speaking, it sounds like Roon is doing the right thing here, but let me know if I’ve misunderstood something. Thanks!

Using @Howard_Ipp example of Sharon Jones and the Dap Kings, if I have Artist sorted by Last Name, should we expect the following album to show up under Jones and Sharon in Album View? That’s not what I’m seeing. 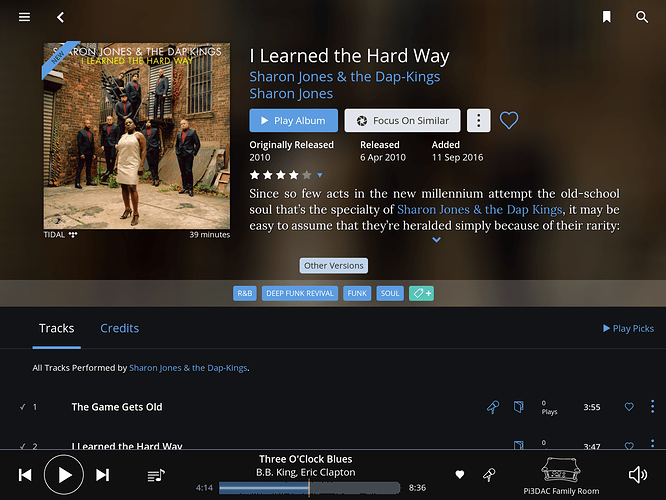 It shows in Album View under Sharon Jones and the Dap-Kings, but not under Jones. So, I’m not seeing it in both locations.

If I select each artist using the hyperlinks, the album shows under both.

I’m I misunderstanding this?

Howard, is this what you see?

Hi Greg and Mike
I never noticed the 2 separate artists in the album view. The Paul Butterfield displays similarly. AND that is exactly what I see on my system.

I read Mike’s explanation of how ROON indexes the artists and I found the “other” artists in their alpha positions when sorting by last name. Would never have noticed the duplicates in that situation.

It is a different approach and it has some merit. I assume then that a Dion and the Belmonts album will have 2 artists, solo and group. Or Paul Mcartney and Wings and Wings
Also does it count as 2 artists adding 2 to the total of artists in the overview?

May be worth building an option of defining the name of a group and/or artist by album exactly or with alternatives. Or not🙂

A very complex indexing and sorting system indeed! ROON has been carefully thought through.

Thank you Greg and Mike for the explanation.

Thanks for the info Howard.

It looks like the software is functioning as expected. I would assume that your example would count as 2 artists in the overview. Maybe Mike could confirm.