I have an album by the band “Release Music Orchestra” which contains the track “Blackbird”. The album got identified and as composer there is “McCartney/Lennon” listed. Yes, they also have a composition with the same name, but in this case it is “Rürup/Haberland/Lindner”. How can I get this sorted?

Hi, @Ralf_Karpa, thanks for the report!

May I ask you what album is that? Is it an album from TIDAL one or your local albums?

This can be fixed by:

Your solution steps, is what I did already, but doesn’t help. Here’s the Track-Edit screen:

The corresponding composition view is as follows: 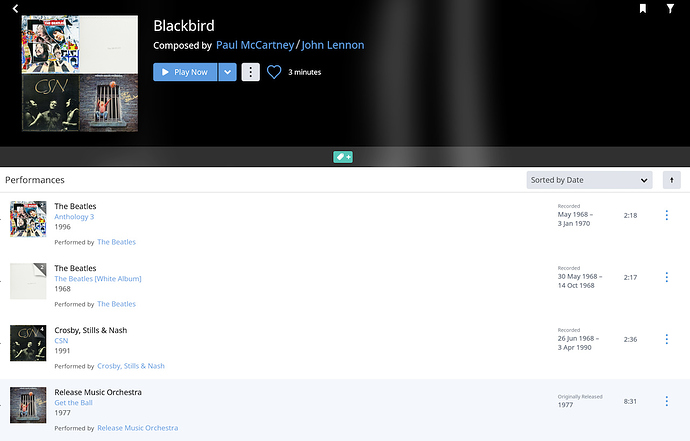 The album is Get the Ball (local album, I do not have Tidal) 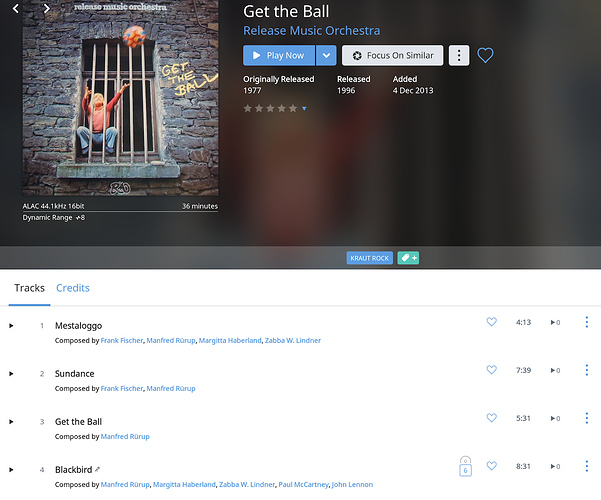 This is all because Roon’s metadata partners have made a mistake and Roon will get it sorted in the end I’m sure.

In the meantime, I’ve been trying to find a way to achieve what @Ralf_Karpa wants and I’ve come to the conclusion that this is a wider problem and something is broken.

I couldn’t get the album in question, but I don’t think that’s important here. The general requirement is: with an identified album, we want to break the connection between an identified track and its composition.

First attempt - delete current composer, add new, re-identify track. No good.
Second - get album unidentified (identify and say no to all suggestions). Add new composer to track in question. Identify track - ok, that works. Now re-identify album - nothing happens, although the TOC would match? (Interestingly, at this point a view credits will show just the new correct ones, but going to edit and credits shows the old credits are still there, although unticked).
But we still want to identify the (rest of the) album, to get all the extra info, but…, identify album - causes my edits to disappear and we’re back where we started.

The third step, which I haven’t done, would be (for a local album), to delete album, clean library, and set prefer file metadata on import settings, set the correct metadata for the relevant track, and re_import. That might work, (though I’m not sure identify wouldn’t overwrite everything again)…but surely one of the above methods should work too?

A long ramble with no reward, sorry. Over to @ivan

The general requirement is: with an identified album, we want to break the connection between an identified track and its composition.

That is exactly it. This would also help solving all other issues with compositions. Once a track is being handled as “unidentified”, the linking to other compositions, etc. works as expected.

Hi, @BrianW, @Ralf_Karpa, thanks for feedback, I checked our metadata page for this album and it seems like we were getting bad data from metadata provider, an e-mail has been sent to them to inform about the issue. Apologies for inconveniences.

Hi Ivan, As @BrianW also pointed out, this is one example. I cannot send every little issue I find regarding compositions and ask for a solution via email with the service provider. Isn’t there an easier way to solve this issue?

If we all thought that, then the quality of the metadata would never improve, and it would remain as garbage in, garbage out. We don’t have to send in every single metadata issue we find (I certainly don’t), it’s not a duty; but I, for one, am grateful to those who do flag errors and help improve the metadata for us all.

I just started sending for every issue I find, VERY time consuming and not straight forward as the problem lies within the software itself. As mentioned earlier, if an album is unidentified, it does work all the time, once the album is identified, it breaks and relies totally on the metadata service provider.

Hi @Ralf_Karpa, we’ve been informed by TiVo that they have corrected the composer credits for Blackbird. Please allow up to a week for this new metadata to be pulled into your library. Thanks.

Hi Joel, do I need to re-identify the album or will that be automatically pulled in?

Hi Ralf, it should be automatic unless you have edited that track.