I can normally save an Album by composers by hitting the “save to library” key. But sometimes, it wouldn’t show under the composer. Some times it appears as " in my library" and sometimes as " appearances in my library" despite there are no other shared composers on the album.
Hitting the “+” button ie “added to my library” doesn’t help. Still wont show in my library under said composer.
Help ! I must be doing something wrong or my Roon software, latest version, is not working consistently

This is probably an issue caused by poor metadata in the album (from Qobuz or Tidal?) that you are saving to your library. You should be able to fix it by using the Album editor in Roon.

Can you post a screenshot (of the album page) of an example album that is not showing up correctly on the composer page? Thanks.

I am on Tidal. These albums that I hit “add to library” under a composer and not showing in my Library under the composer are numerous and pretty normal albums. The funny thing is some do and some dont. About 4 in 10 do add but dont show. However many any just simply add on to the composer as in my Library. Eg in Tchaikovsky, I have been trying to add many albums but none appear except on the Home page showing it was added. Removing and adding again dont work using the “+” button. My software is the latest ver1.8 build1105.

I am new. I will try to learn how to screenshot abd attach on my new Samsung tab.

I’m not sure how you would do it on an Android tablet (perhaps someone else can help), but this is how you do it on a Windows PC or a Mac…

Geoff - I will pick up how to screenshot on this tablet later but what I am talking about are many many simple albums from popular labels eg EMI, RCA, Naxos, Decca etc etc. Many are one composer per album, 2 symphonies,1 conductor and 1 ensemble. Hit the “save to library” key but do not show in the composer under “my library” . The album only show on “Albums played or added” page but not the composer.
What is there to edit ? Many are straight forward alums. Some do show and some dont. I suspect there is a bug in the software causing this inconsistency ???

Some examples would be very useful, because this issue is not usual; you certainly should not be seeing “many many simple albums” not being picked up on the composer pages.

Here’s an example from my own library, which highlights an issue that you might see. It’s the Composer page for Gustav Mahler, looking at the Discography, and showing just the albums in my library (the “Library” icon is selected) rather than the complete Discography: 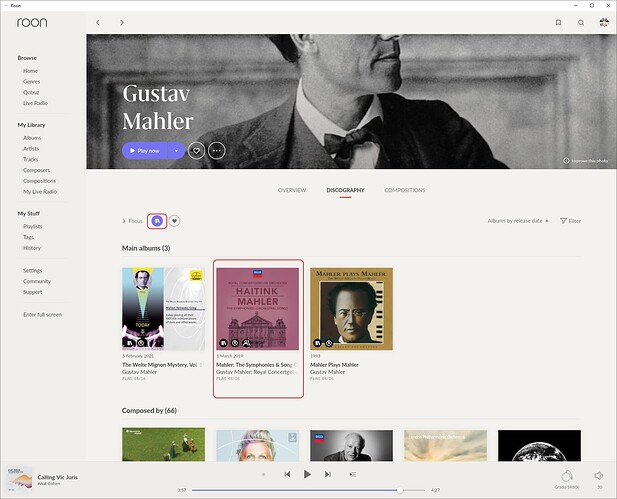 Entries in the “Main albums” section are for albums of recordings where Gustav Mahler is a performer. And here is an incorrect entry: the box-set of Mahler performed by Haitink and the Concertgebouw should not be there, but in the next section (“Composed by”).

This is caused by poor metadata. I’ve added the box-set from Qobuz, and Qobuz lists Mahler as a “Primary Artist” (i.e. a performer): 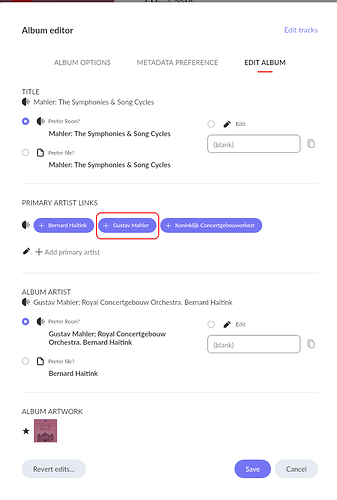 So what I’ve done is to remove the Primary Artist credit by clicking on to to turn it red and save the result: 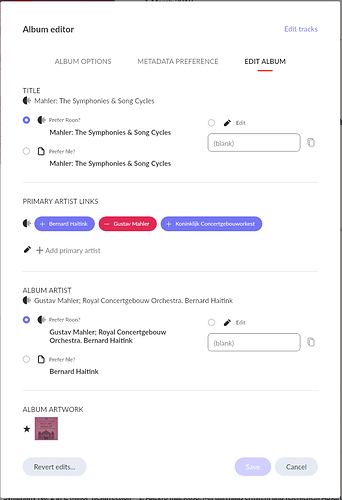 And now, my library Discography correctly shows the two albums where Mahler is the performer, and the box-set is now listed in the "Composed by"section: 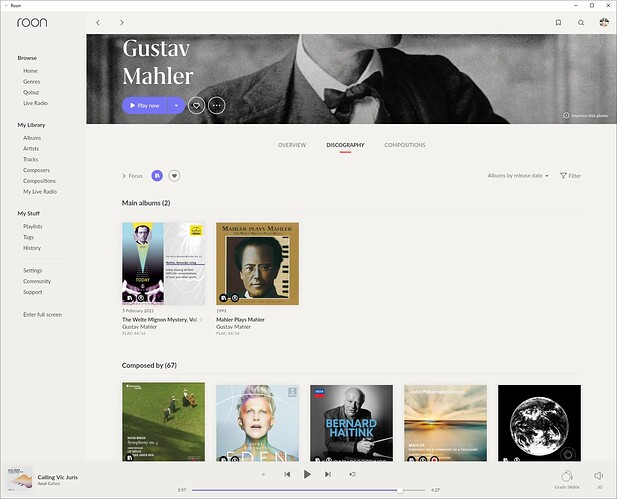 OK Thanks. I take note and come back to you.

Also for saving any albums, why is there a “+” key and a “save to library” key (under the 3 dots). What is the difference ?

I have added the composer/s name by editing n “add Primary artist” step/s. This seem to save the album under the composer n solved the problem. Have I got it right?

Probably not a good idea. You’re effectively telling Roon that the named composer is also a performing artist on the album, and this is not what you want… Bach and Beethoven are long dead - they don’t perform on any of the recordings of their compositions.

If the composer’s name is missing from an album’s metadata, and Roon has been unable to identify the work(s) as being written by a particular composer, then the place to add it is un the album credits, not in the primary artist section.

If you have an album with works by different composers, and the album has not been identified by Roon (thus the works have not been assigned to the respective composers), then you would have to use the track editor to add a composer credit to each track on the album.

These should be rare cases, and only occur when Roon has not been able to identify the album. Are you getting a lot of albums that are unidentified? If so, then perhaps we need to investigate why this is the case before you start doing mass manual editing…

Also for saving any albums, why is there a “+” key and a “save to library” key (under the 3 dots). What is the difference ?

The “+” key is a one-click action to add an album to your library. The 3 dots menu gives additional options besides adding the album to the library. And once added, this option changes to “Remove from library” (for albums added from a streaming service).

then the place to add it is un the album credits, not in the primary artist section.

Where is this ? part of the album editing function ?

quote=“Geoff_Coupe, post:10, topic:212530”]
then you would have to use the track editor to add a composer credit to each track on the album.
[/quote]

Where is this ? Is this also part of the album editing function ?

The album editor has a section for editing credits - you need to open the Album editor, click on the Edit Album tag and then scroll down to see it: 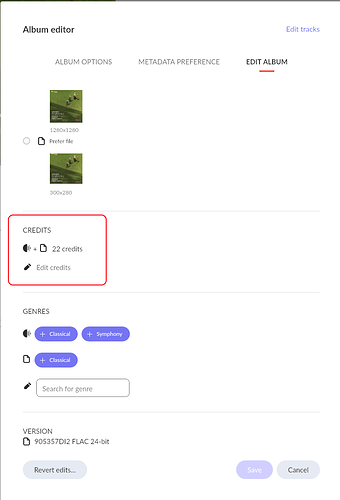 To edit tracks in Roon, select them with a right-click (or a long tap on a tablet’s touchscreen) then choose Edit from the “3 dots” menu. Once again, in the Track editor, click Edit Track and there is the Credits section… 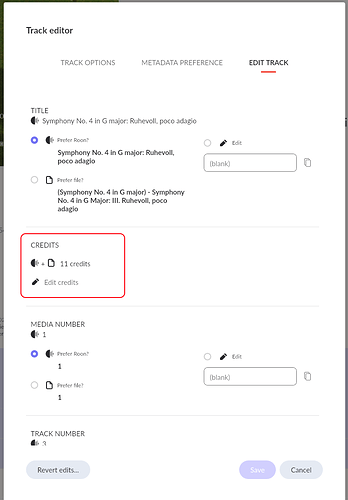 Having a composer listed in “Credits” (as per your proposal) do not result in the Album being saved under the Composer in my library. An example eg - the album - Des Nusskracker composed by Tchaikovsky, conducted by Micheal Tilson Thomas n performed by LSO. The composer, conductor and ensemble are all listed in “credits”,yet saving the album do not result in the album saved under Tchaikovsky the composer. Worse still, Roon cannot even list/find the album in a search under the composer. Need to go to the conductor to find the Album. Mind you this is a simple, one composer, one play/song album.

Another example - Artist Giorgio Fumanti: From My Heart album. JS Bach is not listed in the credits (about 55) nor as artist/composer, yet my library shows this album under composer JS Bach.

I am totally lost on the algorithm as to how the filing goes. In the meantime, I am surviving by inserting Composers into " add primary artist". This seem the only way for it to work. I have now checked. There are many many albums where the composers are listed under “credits” but any album saved just do not show under composer.

I ask, because the Michael Tilson Thomas album you quote is not available in Qobuz, nor available to download from the LSO website.

And It’s not Giorgio Fumanti, but Giorgia Fumanti - and this album is available in Qobuz. 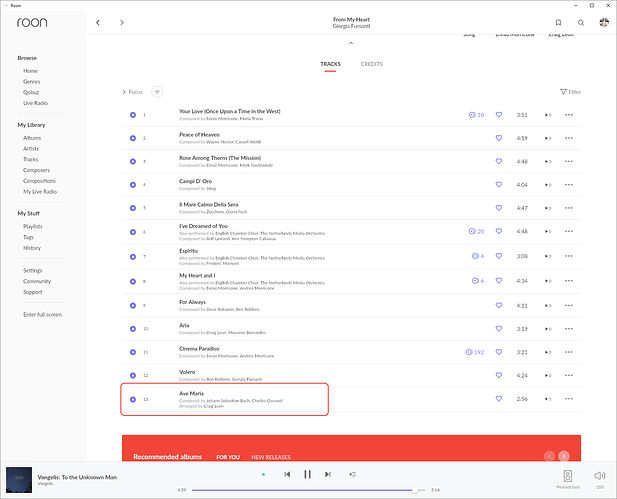 The credits for the Ave Maria say that it was composed by Bach and Gounod, and it’s listed as a Gounod composition, because he took the original Bach prelude and improvised on it to produce Ave Maria. 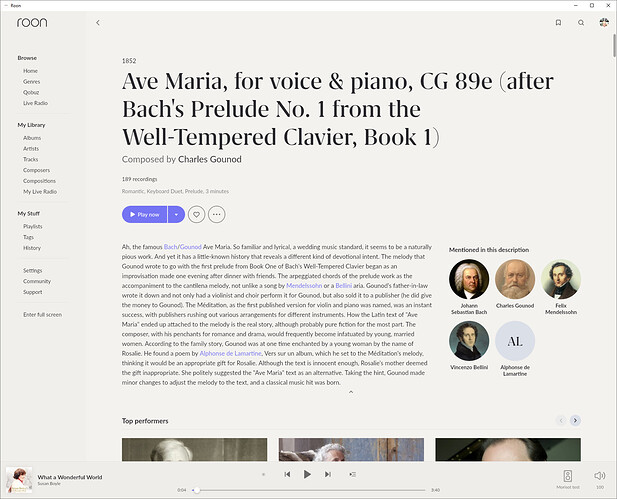 I’ve added the Fumanti album to my library, and it is showing up under Gounod’s Discography, so the question is, why is it not showing up for you? 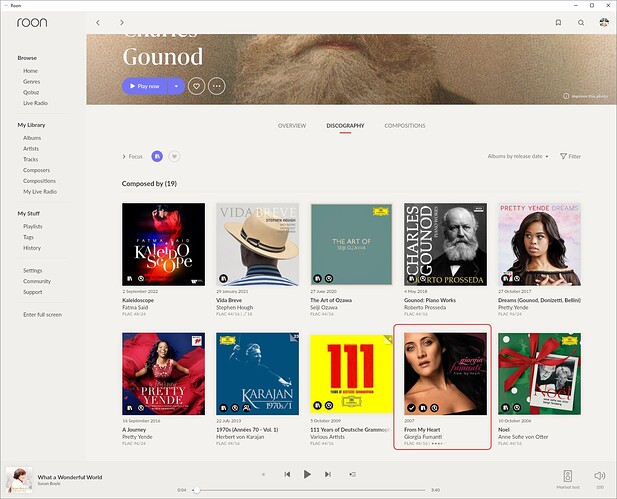 Sorry Geoff - I should have explained earlier. I am streaming on Tidal Hifi plus via Taiko Extreme. I am in Singapore and Qobuz is not available, I believe, in most part of Asia. I have not ripped any albums into my Extreme.

You are right its Giorgia Fumanti. This album is available in Tidal. I was checking in “Credits” in album edits. I could not find JS Bach. There were 55 names listed, I could have missed JS Bach name even using “filters”. I will go and check. In any case, this album in my library is listed under JS Bach.

See if you can work out the filing logic on this " Des Nusskracker" album.
I really appreciate your efforts to help me.

Btw at this end of each your mail, there is a message/request for me as follows "you must be enjoying the chats…why don’t you sign up an account ? " I already have a Roon account. How else could I have signed on, make enquires and reply. Is there another type of Roon account I need to sign up ?

See if you can work out the filing logic on this " Des Nusskracker" album.

OK, found it - once I discovered the title you quoted was misspelled.

I added it to my library - and it is now listed in Tchaikowsky’s discography (“composed by”): 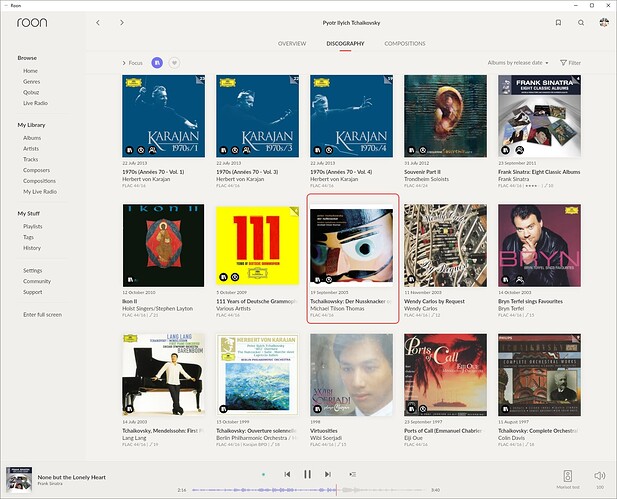 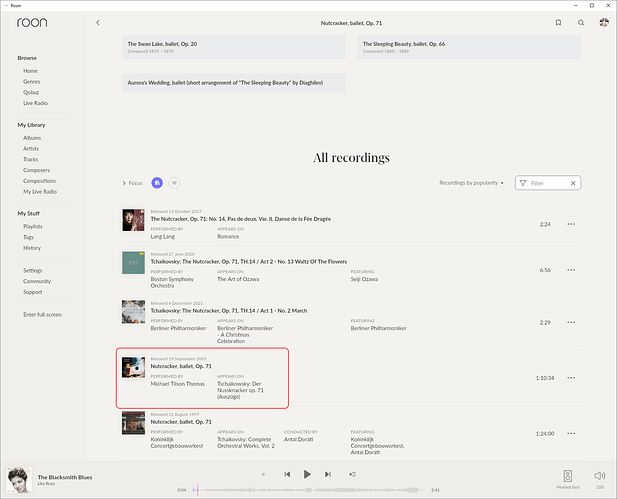 So why is it not in yours?

there is a message/request for me as follows "you must be enjoying the chats…why don’t you sign up an account ? "

Yes, sorry for mis spelling Der NussKnacker. Yes, I had to search via the conductor/Tilson Thomas to find this album. This one composer/one conductor album is now listed in Tchaikovsky under “Appearances in my library” and not “In my library”. What is the logic?

Yes, G Fumanti album, I can confirm JS Bach is not in the edit album/credit list(of 55) but in the front page “Credits”. It is now listed “From my library” for Bach and not under appearances. There are many composers in this Fumanti album. Again what logic?

Many inconsistencies. I could go on. I am trying to enjoy.

“Appearances” is used for performers. Since JS Bach is long dead, I would not expect him to appear in a list of Appearances…