Description of Issue
I have a specific, reproducible problem with scanning. As my library and equipment have grown over the years, I sometimes have the same album in multiple formats.

For example, I may have the same album as both FLAC and DSD64. Only one of these formats shows up in Roon. Sometimes it’s the DSD version, sometimes its FLAC.

If I am missing one of these formats, and I remove the other and rescan, the missing format shows up.

I have multiple reasons for keeping both versions. My big audiophile system would use the DSD version, of course, though sometimes with friends I want to listen to the difference between the versions on my system. My smaller rec room system also uses Roon and can’t do DSD, and sometimes I want to put a version on a portable device. So the use case of having both versions in my library is perfectly valid.

It’s certainly possible that I’m reporting a known issue, but my quick search of the knowledge base and community site didn’t turn it up.

@support: is this documented somewhere, is it a known problem, does it have a traceable ID in the system so it can be tracked and fixed?

Does Roon have a user-accessible, searchable index of known issues with tracking numbers? if not, this would be a huge improvement.

Trying to seach 5 years of archives for duplicate formats or missing albums is very difficult, since many of the posts are duplicate reports, missing information, or just plain user misunderstanding.

Only one of these formats shows up in roon

is this documented somewhere?

ok, thanks for the quick response. I somehow had seen this FAQ but it didn’t sink in…

but… doesn’t seem to work for me. I changed the setting to show hidden files, but the version field does not show up on the album page (where duplicates exist) like the FAQ shows. I suspect the picture in the FAQ is an earlier version of the software. Rebooting the server didn’t help. I’m running 1.8, 795 on ROCK.
After checking “show hidden files” and rebooting the server, I still see only one copy of albums and no “versions” field on the album page.

Not official support, but, it might help us help you if you could post of screen pic of what you do see on the Album page. This is a pic of 1.8 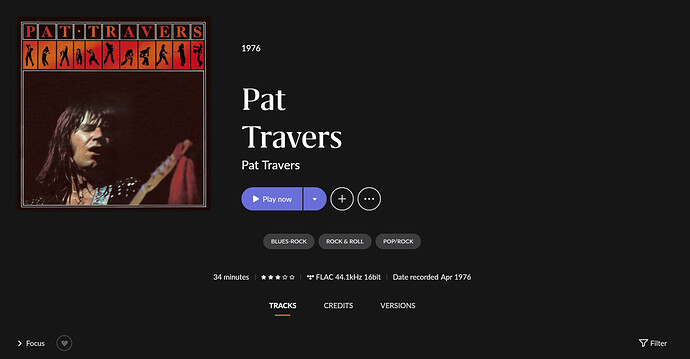 Note the Versions tab next to credits.

Here is a screenshot, truncated a bit at top, but as you can see there is no “versions”. “show hidden files” is turned on, there are two copies of this album in my library (one flac, one dsf), and I have both rescanned and restarted the server (actually rebooted ROCK) after turning “show hidden files” on. If I remove one of the albums, the other shows up. If both are in my library, only the flac version shows up. 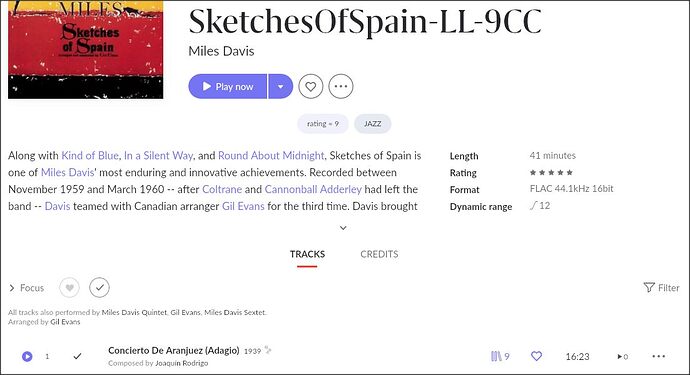 Thanks so much for getting in touch about this and describing in detail the trouble you run into. I’m very sorry!

I’ve looped in our technical team so they can help with this, but, in the meantime, I was wondering, in your example is you search in Roon for Sketches of Spain by Miles Davis, do both versions (FLAC 16/44 and SACD DSD 64) show up as a result?

Also, could you please tell us more details about where are the files stored? In the same location? Different ones?

The files are in a single network share that has all my music, mounted by the rock system. In that share, all albums by one artist are grouped, so both versions of sketches of spain are at the same level in /music/jazz/MilesDavis (BTW, I have many other albums with multiple encoded versions that also show this behavior: I never see duplicates. The Miles Davis is just one example)

Your post is more than I could have hoped for! Thank you for all the clarifications. They will really help our technical team

well, this anomaly gets stranger. If I go to “albums”, and just scroll through all the albums in the library sorted by artist to miles davis, I find both versions of the “sketches of spain” album (!). As reported above, if instead I search for miles davis and scroll through his albums, I find only the one version. If I search for sketches of spain, I get only one version.
So whether roon shows both versions depends on how I try to access it.

So whether roon shows both versions depends on how I try to access it.

Yes (and your settings too), which is AFAIK expected, because search is not meant as a way to browse your library. That’s what the different browsers are for. The search allows to quickly find something and therefore combines online sources (if you have them active in Roon) and your library and displays results sorted into categories (Artist, Album, …). Especially with results from online services too, the possible results are many. So search results in Roon have to be limited to a few (best) matches per category. Presenting the 101 version of a specific album present in catalogs from online services and your library is not the goal of the search as I understand it. If there are multiple versions of the same album in the search results, Roon does its best to present you with, what it thinks, is the best match and uses the other available slots in the search result to display other possible matches instead. Choosing a result is all you need to do, to be able to play and listen to it. Additional information about it, including about other versions for albums, can usually be accessed from the details page. But …

I changed the setting to show hidden files, but the version field does not show up on the album page (where duplicates exist) like the FAQ shows.

By enabling the display of hidden content you disabled the version functionality for duplicates in your library as documented.

Just my 2 Cents from another user.

In your screenshot of Sketches of Spain, you can see that you have nine versions of Concierto de Aranjuez in your library. Does this link to other versions by Miles David?
I was also wondering: this album had a rather odd title… not the original one. Would this have anything to do with there being no other versions?

A bit more:
@arlen: Yes, the sketches of spain shows 9 versions of Concierto de Aranjuez in my library. One of those is from Miles Davis at Carnagie hall, the rest are performances by other artists. None are listed from the “duplicate” copy of sketches of spain, but I’m not sure thats an issue.
As for the title, thats supposed to be just my filesystem title. I have a standard way of naming albums: Date-Title-encoding-rating. (been doing this a while). I hadn’t thought about why roon was sometimes displaying the filesystem title instead of the album title from the metadata… In this case it was my error: I somehow got the filesystem name as the metadata album title. Thanks. Not sure if this could be related to the basic problem with showing duplicates, since other cases already have the correct album title in the metadata tag.
@blackjack:

By enabling the display of hidden content you disabled the version functionality for duplicates in your library as documented.

huh? you sent me the original FAQ for this (thanks!), and now you are saying the exact opposite of the FAQ. It looks to me like you have to enable “show hidden files” for the “versions” field to show up, and thats how it works for me.
I also think your characterisation of search needs modification. I don’t use online services, and search normally works great on my library. I think it needn’t have anything to do with duplicates: if search locates your primary copy, then you can use “versions” on that primary copy to find other versions.
This is apparently a complex topic, I’ll summarize in a separate post

ok, this has been a difficult topic. There is something peculiar with roon and duplicate albums. I’ll try to summarize without details of side threads. Still, I can only simplify so much.

Lots of my albums in multiple formats only show up in one format. I don’t see the “versions” field in the album view. Its possible that I did not have “show hidden tracks and albums” turned on in the settings/general initially when the database was created - I’m not sure. But I did make sure it was on now - and it didn’t help, even with rescan. In my previous example I used Miles Davis, Sketches of Spain.
Since I have a big library, its tedious to make changes and force a rescan. I decided to create a small test library. It had only “Sketches of Spain” (both my flac and dsd copies) and a couple of bob dylan albums I also had in both flac and dsd. Well, after adding that test library to roon and rescanning, the version flag showed up and I could browse all these albums.
was I imagining my problem? no. I checked another album, peter paul and mary’s first album, also both flac and dsd. No version flag, only one version showed up (though if you scroll through all albums without search, both versions are there, as I reported above. this is a side note).
So… I put the peter paul and mary album in my test directory and forced a rescan on that small directory.
the versions field showed up and both versions were there.
A light has dawned. In another post (which has not gotten feedback or help from @support, Search/filter with tags and ruminations on advanced search) I pointed out that roon’s album scan was not picking up some of my metadata edits. However, in that case the individual album rescan did. Now I find that after turning on “show hidden tracks and albums”, and rescanning, version tags are not activated on duplicate albums (because the fast scan does not do the duplicate processing???: don’t you love closed source software?). Also whether the duplicates can be found at all depends on how you try to access them.
My conclusion, corrections welcome:
roon rescans can miss both metadata edits and (if you change “show hidden files”) duplicate albums.
there are ugly workarounds: scan albums individually to get metadata changes, and create storage locations to do a complete reprocess for duplicate albums.

my post on rescan missing some changed metadata was ignored. I think this set of issues with scan should be high priority to address.